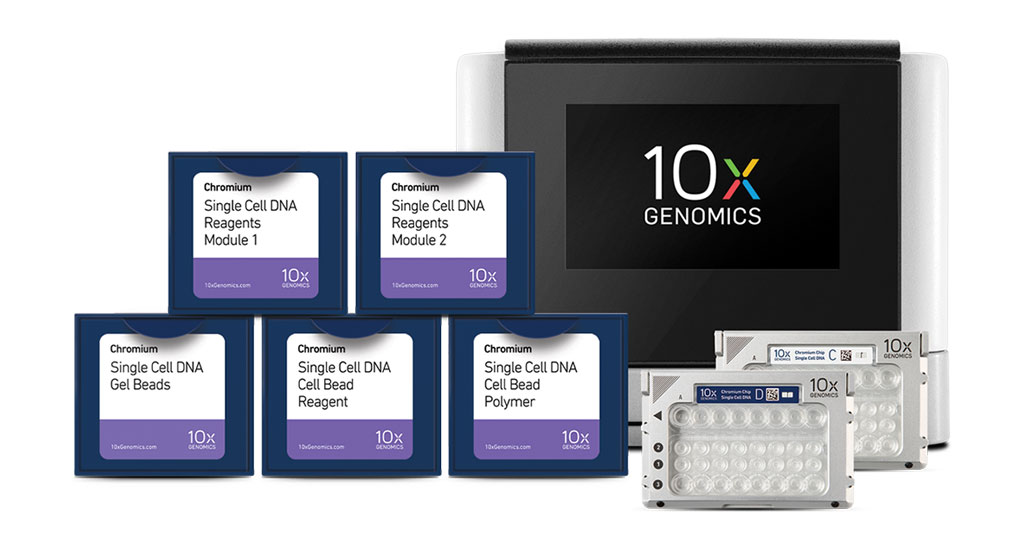 Image: Single-cell copy number profiling: Chromium Single Cell CNV Solution provides a comprehensive, scalable solution for revealing genome heterogeneity and understanding clonal evolution (Photo courtesy of 10X Genomics).
The ability to sequence the genome of a tumor has revolutionized cancer treatment by identifying drivers of cancer at the molecular level. However, understanding the genetic diversity of individual cells within a tumor and how that might impact the disease progression has remained a challenge, due to the current limitations of genomic sequencing.

The standard paradigm is bulk sequencing of genomic DNA derived from millions of heterogeneous cells. In bulk sequencing, the ability to resolve sub-clonality is confounded relying on indirect inference, frequently resulting in an ensemble view dominated by the majority clone. Methods for sequencing DNA of single-cells using next-generation sequencing approaches have often been laborious or limited to multiplexing hundreds of cells or nuclei.

Molecular Biologist at the Keck School of Medicine (Los Angeles, CA, USA) and their colleagues performed shallow single-cell sequencing of genomic DNA across 1,475 cells from a cell-line, COLO829, to resolve overall complexity and clonality. This melanoma tumor-line has been previously characterized by multiple technologies and is a benchmark for evaluating somatic alterations. Cells were then analyzed and sorted on a flow cytometer using 488 nm excitation and green emission gating on cells in the G1 phase of the cell cycle. Cells were counted post-sorting to ensure accurate concentration.

The team reported that following shallow single-cell sequencing, they first identified at least four major sub-clones by discriminant analysis of principal components of single-cell copy number data. Based on clustering, break-point and loss of heterozygosity analysis of aggregated data from sub-clones, they identified distinct hallmark events that were validated within bulk sequencing and spectral karyotyping.

Enrique Velazquez-Villarreal, lead author and assistant professor of translational genomics, said, “Instead of analyzing tissue DNA that is the average of thousands of cells, we analyzed the individual DNA of close to 1,500 cells within a single trial. Studying cancer at this higher resolution, we can discover information that lower-resolution bulk sequencing misses.” The study was published on June 25, 2020 in the journal Nature Communications Biology.