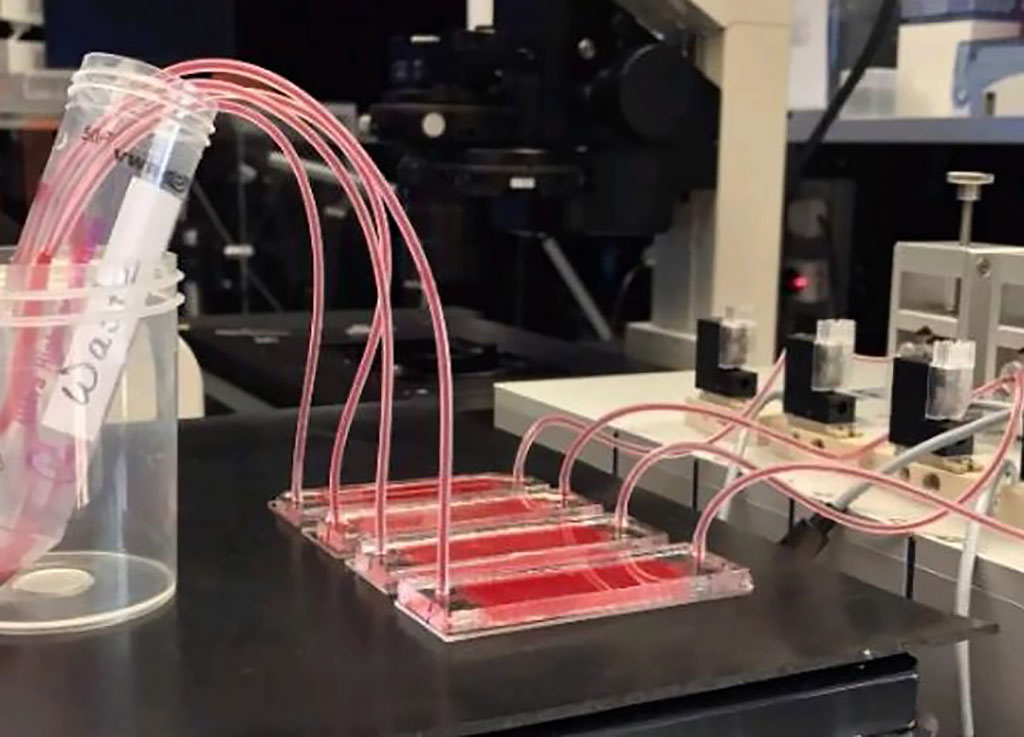 Image: A new fluid analyzing platform allows for the isolation of circulating tumor cells (CTCs), which are formed during metastasis (Photo courtesy of NYU Abu Dhabi)
By creating a hybrid microfluidic liquid biopsy platform that incorporates atomic force microscopy (AFM), cancer researchers have captured and characterized circulating tumor cells (CTCs), a technique which should prove useful in the diagnosis and prognosis of prostate cancer as well as other forms of cancer.

Circulating tumor cells (CTCs) carried by the patient’s bloodstream are known to lead to the metastatic spread of cancer. Although they are important cancer biomarkers, CTCs are very rare and hard to isolate from the background of billions of healthy blood cells. Nonetheless, it has become clear that an understanding of the nanomechanical characteristics of CTCs, such as elasticity and adhesiveness, would be a significant advancement in tracking and monitoring cancer progression and metastasis.

To attain this understanding, investigators at NYU Dubai (New York, NY, USA and Dubai) developed a combined microfluidic-AFM platform based on specific antibody-based capture of CTCs in whole-blood samples from prostate cancer patients and subsequent characterization of their elasticity and adhesiveness. The microfluidic device was designed to provide a high density of oriented antibodies on its glass surface. The device was assembled via reversible physical polydimethylsiloxane (PDMS)-to-glass bonding, which later allowed external access to captured CTCs. The device was highly efficient in capturing prostate CTCs via antibodies directed at their epithelial cell adhesion molecule (EpCAM), prostate-specific antigen (PSA), and prostate-specific membrane antigen (PSMA).

Atomic force microscopy (AFM) is a type of scanning probe microscopy (SPM), with demonstrated resolution on the order of fractions of a nanometer, more than 1000 times better than the optical diffraction limit. AFM has three major abilities: force measurement, topographic imaging, and manipulation. In force measurement, AFMs can be used to measure the forces between the microscope’s probe and the sample as a function of their mutual separation. This can be applied to measure the mechanical properties of the sample, such as the sample's Young's modulus, a measure of stiffness.

Results revealed that the hybrid biofluidic device was suitable for AFM measurements of captured intact CTCs. When nanomechanically characterized, CTCs originating from metastatic cancer demonstrated decreased elasticity and increased deformability compared to those originating from localized cancer. While the average adhesion of CTCs to the AFM tip surface remained the same in both the groups, there were fewer multiple adhesion events in metastatic CTCs than there were in their counterparts. Thus, the platform was shown to be simple, robust, and reliable and could be useful in the diagnosis and prognosis of prostate cancer as well as other forms of cancer.

"We expect that this platform could constitute a potentially very powerful tool for cancer diagnosis and prognosis, by identifying CTCs mechanical and biological phenotypes at the single cell level," said senior author Dr. Mohammad A. Qasaimeh, assistant professor of mechanical and biomedical engineering at NYU Dubai.

The liquid biopsy-AFM platform was described in the March 23, 2020, online edition of the journal Microsystems and Nanoengineering.