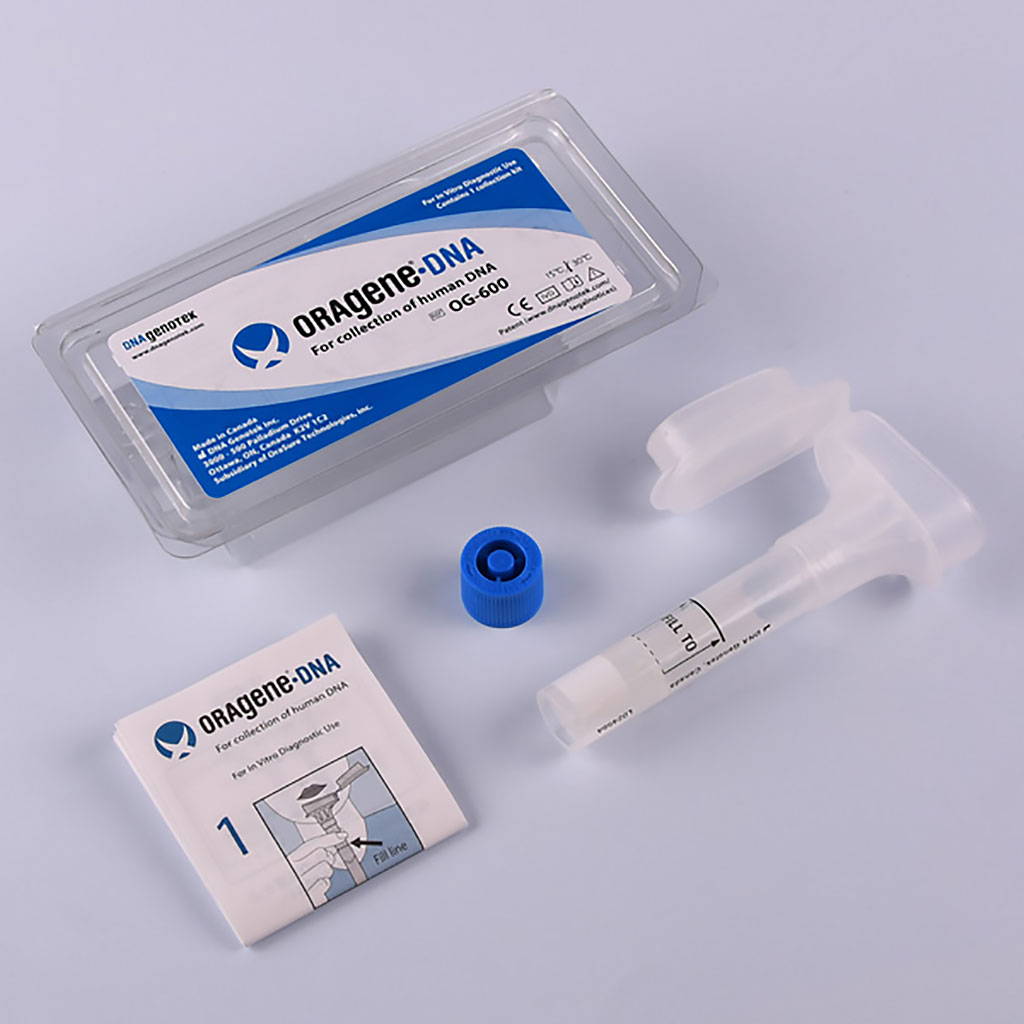 Image: The Oragene DNA saliva collection kit (Photo courtesy of DNA Genotek)
A study based on analysis of saliva samples supports the concept that determination of DNA methylation in salivary tissue can be used to predict the eventual development of obesity by Hispanic children.

Prior findings reported by investigators at Vanderbilt University Medical Center (Nashville, TN, USA) in non-obese preschool-aged Hispanic children identified 17 CpG dinucleotides (regions of DNA where a cytosine nucleotide is followed by a guanine nucleotide) for which differential methylation in saliva at baseline was associated with maternal obesity status. The current study investigated to what extent baseline DNA methylation in salivary samples in these three to five-year-old Hispanic children predicted the incidence of childhood obesity in a three-year prospective cohort.

For the study, the investigators examined 92 participants of the Growing Right Onto Wellness (GROW) trial who were randomly selected at baseline, prior to randomization, based on maternal phenotype (obese or non-obese). Baseline saliva samples were collected using the DNA Genotek (Ottawa, Canada) Oragene DNA saliva collection kit. Methylation arrays were processed using standard protocol. Associations between child obesity at 36 months and baseline salivary methylation at the previously identified 17 CpG dinucleotides were evaluated using multivariable logistic regression models. Objective data were collected on child height and weight at baseline and 36 months later.

Results, which demonstrated the utility of using saliva for epigenetic studies, revealed that methylation of the NRF1 gene was associated with childhood obesity. NRF1 (Nuclear respiratory factor 1) encodes a protein that functions as a transcription factor, which activates the expression of some key metabolic genes regulating cellular growth and nuclear genes required for respiration, heme biosynthesis, and mitochondrial DNA transcription and replication. A child with NRF1 methylation at baseline was found to have threefold increased odds of being obese three years later, after controlling for maternal BMI and other factors.

"At baseline, these children were all non-obese, but based on their maternal BMI, their DNA was methylated differently at 17 sites," said senior author Dr. Shari Barkin, professor of medicine at Vanderbilt University. "Now we know that some of them emerged into obesity. Most studies have looked for factors in children who are already obese. Our study demonstrates that there are already changes in the physiology - a pathway to obesity - even before the phenotype of obesity emerges. If we can define a predictive epigenetic signature, we can intervene earlier to reduce health disparities in common conditions like obesity."

The childhood obesity study was published in the February 14, 2020, online edition of the journal BMC Medical Genetics.