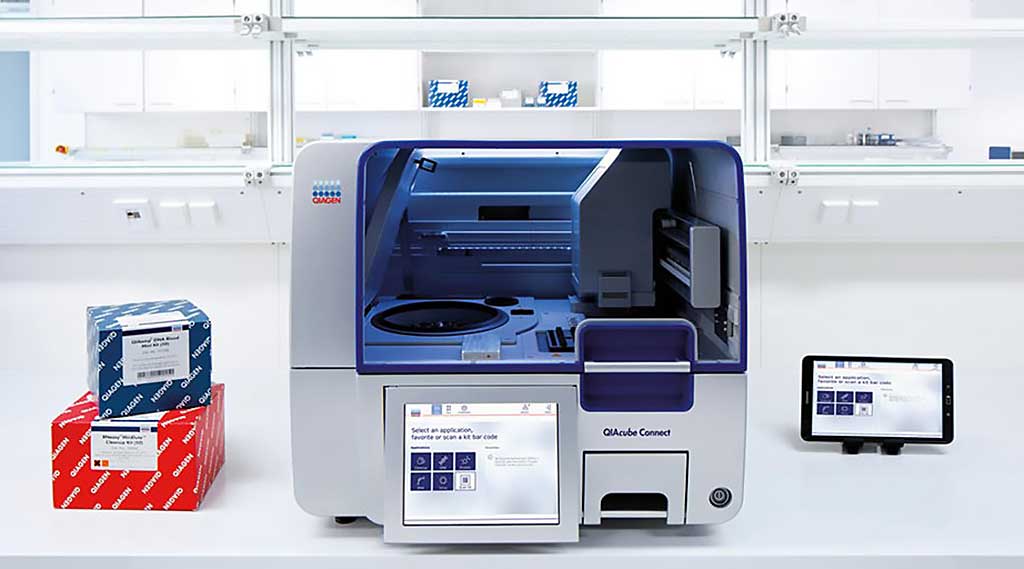 Image: The QIAcube Connect is for fully automated nucleic acid extraction with QIAGEN’s spin-column kits (Photo courtesy of QIAGEN).
Alzheimer's Disease manifests as a familial disease with monogenic inheritance and early onset (Early Onset AD: EOAD), or as a sporadic, multifactorial, late-onset disease (Late Onset AD: LOAD). The latter accounts for more than 90% of all cases and its causes are unknown.

The Presenilin1 (PSEN1) gene encodes the catalytic peptide of the γ-secretase complex, a key enzyme that cleaves the amyloid-β protein precursor (AβPP), to generate the amyloid-β (Aβ) peptides, involved in Alzheimer’s Disease (AD). Other substrates of the γ-secretase, such as E-cadherin and Notch1, are involved in neurodevelopment and hematopoiesis.

A team of international scientists working with the Sapienza University of Rome (Rome, Italy) analyzed patterns of DNA modification that affect the expression of the PSEN1 gene during brain development and during the progression of Alzheimer's in mice. They checked the results in humans by analyzing post-mortem human brain tissue from Alzheimer's patients and from prenatal and postnatal babies and adolescents. To see whether changes to DNA methylation could be detected in human blood, they analyzed blood samples from 20 patients with late-onset Alzheimer's disease, comparing the results to 20 healthy controls.

The results from post-mortem human brain tissue found upregulation of the PSEN1 gene in Alzheimer's patients. In both sexes, there was a significant inverse relationship between the extent of gene expression and DNA methylation. The analysis of blood samples was able to detect lower PSEN1-related DNA methylation in Alzheimer's patients compared to controls. The difference was significant, although not as large as in brain samples. As lower methylation was detectable in the blood, and is associated with higher expression of PSEN1, it could offer a new way to diagnose Alzheimer's early, and less invasively, than sampling brain tissue.

Andrea Fuso, PhD an assistant professor and senior author of the study, said, “We've detected an early sign of the disease in a DNA modification, or epigenetic marker, that was previously overlooked, and that could even provide a starting point for developing new therapies, as well as earlier diagnosis. Our results offer an exciting new area of investigation, deploying the methods we used to study DNA methylation so that modifications won't be missed. If found to be causal, our findings would provide a starting point for developing epigenetic therapies.” The study was published on February 5, 2020 in the journal Epigenetics.