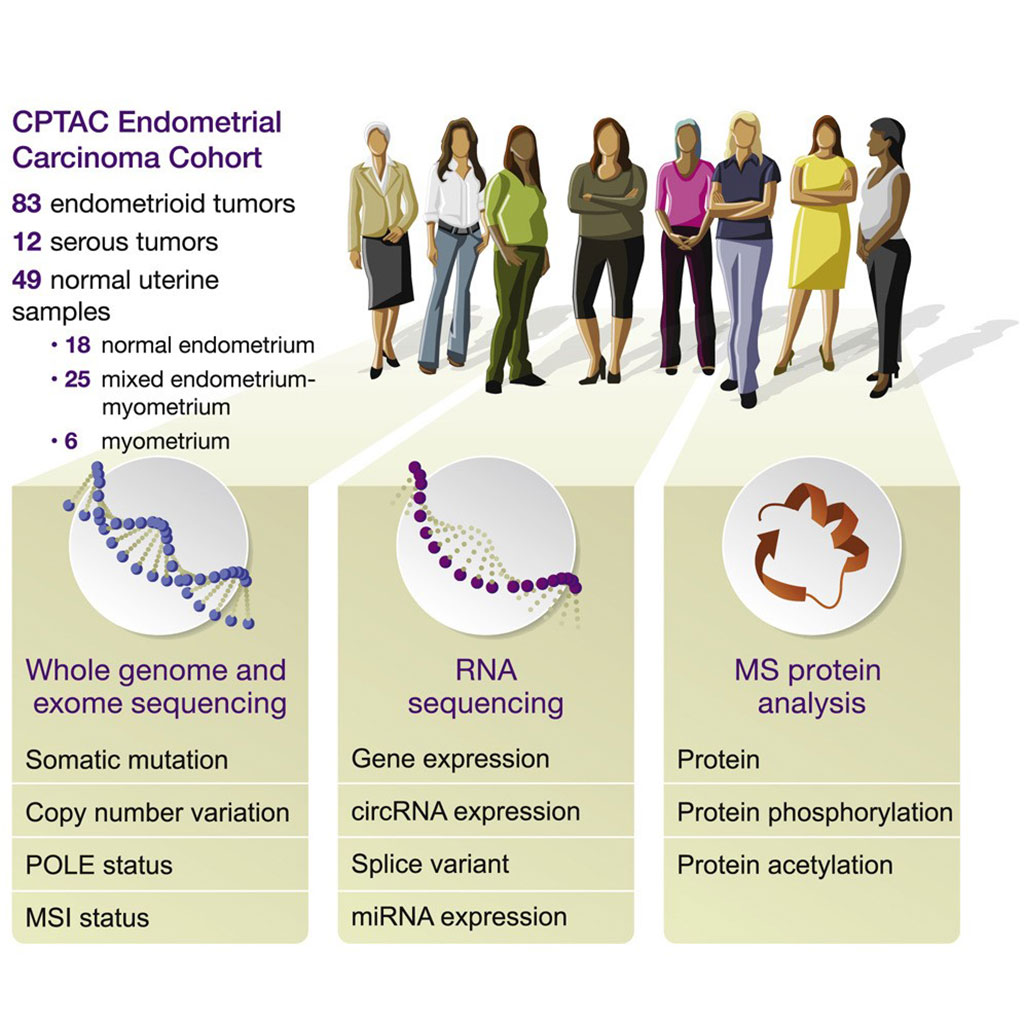 Image: Proteogenomic Characterization of Endometrial Carcinoma (Photo courtesy of the Clinical Proteomic Tumor Analysis Consortium).
Endometrial cancer is a cancer that arises from the endometrium which is the lining of the uterus or womb. It is the result of the abnormal growth of cells that have the ability to invade or spread to other parts of the body.

Endometrial cancer occurs most commonly after menopause. Approximately 40% of cases are related to obesity. Endometrial cancer is also associated with excessive estrogen exposure, high blood pressure and diabetes. The first sign is most often vaginal bleeding not associated with a menstrual period. Other symptoms include pain with urination, pain during sexual intercourse, or pelvic pain.

A large team of scientists led by those at the New York University School of Medicine (New York, NY, USA) described their characterization of 95 prospectively collected endometrial carcinomas comprising 83 endometrioid and 12 serous tumors, and 49 normal tissues. For their study, the investigators performed whole-exome, whole-genome, and total and miRNA sequencing on each tumor and normal sample, along with DNA methylation analyses. They also quantified the relative levels of the proteins and post-translational modification (PTM) sites across the samples.

The tumors were classified into four genomic subtypes: POLE, a rare ultramutated subtype with endometrioid histology and good prognosis; microsatellite instability (MSI), a hypermutated endometrioid subtype; copy-number (CNV) low, which consists of most of the rest of the endometrioid cases; and CNV-high, comprised of all serous and the most aggressive endometrioid cancers. The cohort included seven POLE, 25 MSI, 43 CNV-low, and 20 CNV-high tumors. Protein and PTM levels differed between genomic subtypes.

The team reported that about 61% of all somatic mutations were found in the seven POLE tumors, while the MSI tumors carried 88% of all indels in the cohort. Additionally, they identified INPPL1, KMT2B, and JAK1 as putative significantly mutated genes (SMGs) in the MSI subtype. In another analysis, the team looked at TP53 mutations, finding them in 23 tumors in the cohort, including all serous carcinomas. Rather than grouping all TP53-mutated tumors together and looking for a single molecular phenotype, they segregated them by mutation type and location and identified several proteomic and phosphoproteomic signatures.

The team also compared proteomic and transcriptomic changes between the cancer subtypes. They generated a score for each sample based on the DNA damage response (DDR) marker phosphoproteins and found that DDR-high samples were enriched for serous tumors and therefore the CNV-high subtype, but that DDR-high endometrioid tumors came from the CNV-high, POLE, and MSI genomic subgroups. This indicated that active DNA damage signaling is largely independent of genomic subtype.

The authors concluded that integrating comprehensive quantitative measurements of protein, phosphorylation, and acetylation with genomic and transcriptomic measurements not only has provided novel insights into fundamental biological processes associated with carcinogenesis, but also has provided intriguing leads for new therapeutic approaches in endometrial cancer, including potential criteria for selecting the most appropriate therapies. The study was published on February 13, 2020 in the journal Cell.