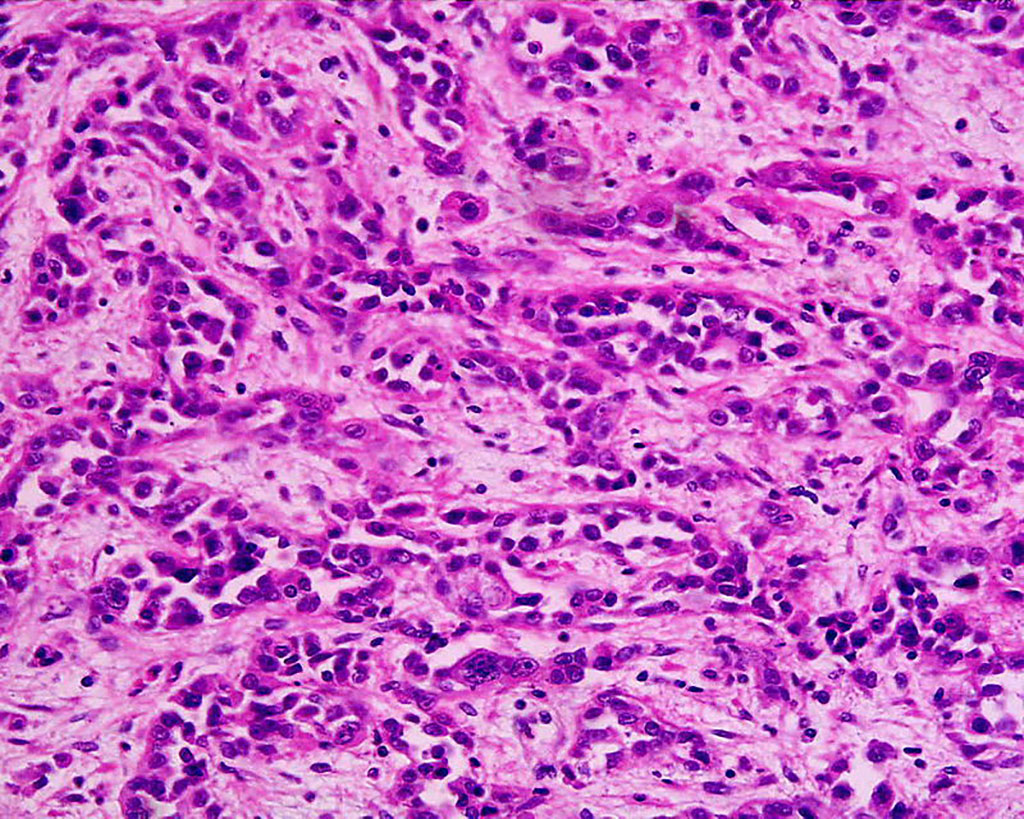 Image: Photomicrograph showing poor to moderately differentiated adenocarcinoma of the stomach (Photo courtesy of Wikimedia Commons)
A liquid biopsy approach, which utilized analyses of matched circulating DNA (cfDNA) and white blood cells from the same patient, was used to predict recurrence of gastric cancer in patients after surgery.

The prognosis of stomach cancer is generally poor, due to the fact the tumor has often metastasized by the time of discovery and the fact that most people with the condition are elderly (median age is between 70 and 75 years) at presentation.The average life expectancy after being diagnosed is around 24 months, and the five-year survival rate for stomach cancer is less than 10%. Almost 300 genes are related to outcomes in stomach cancer with both unfavorable genes where high expression related to poor survival and favorable genes where high expression associated with longer survival times.

Investigators at Johns Hopkins University (Baltimore, MD, USA) analyzed blood samples from 50 patients with gastric cancer who participated in the CRITICS trial, a phase III, randomized controlled study of chemotherapy given at about the time of surgery. The investigators performed deep sequencing of both circulating cell-free, tumor-derived DNA (ctDNA) and of white blood cells from the same patient. After filtering out changes found in the matched white blood cells, the presence of ctDNA predicted cancer recurrence when analyzed within nine weeks after preoperative treatment or shortly after surgery.

These analyses provided a easy method for distinguishing ctDNA from other cfDNA alterations and highlighted the utility of ctDNA as a predictive biomarker of patient outcome in patients with gastric cancer.

“We performed this study to see if we could predict whether gastric cancers would recur using noninvasive liquid biopsies. Using a deep sequencing approach of cell-free DNA and white blood cells, we found an outstanding prediction of whether the therapy was successful,” said senior author Dr. Victor Velculescu, professor of oncology, pathology, and medicine at Johns Hopkins University.

The liquid biopsy method was described in the January 27, 2020, online edition of the journal Nature Communications.