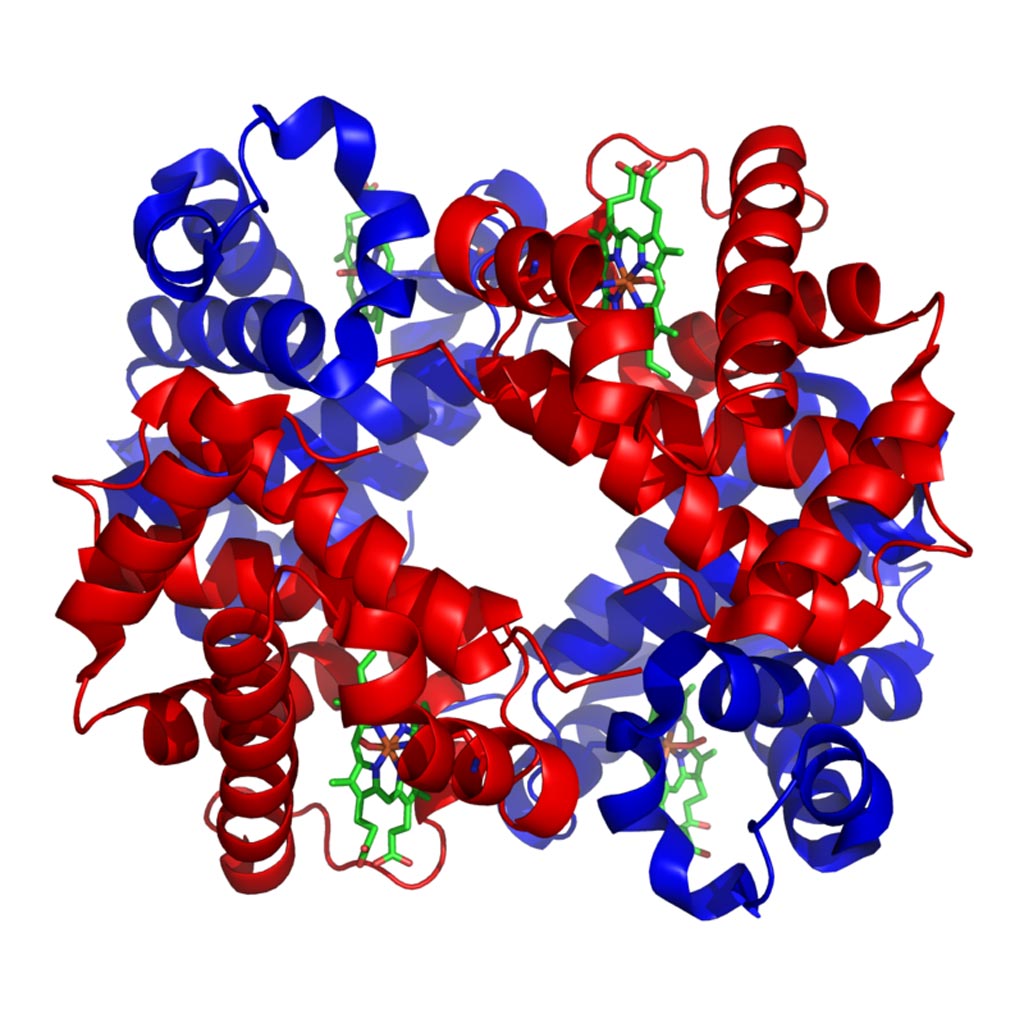 Image: The structure of human hemoglobin with alpha and beta subunits in red and blue, respectively, and the iron-containing heme groups in green (Photo courtesy of Wikimedia Commons).
Both elevated and diminished levels of serum hemoglobin have been linked to an increased risk of developing various types of dementia including Alzheimer’s disease.

Investigators at Erasmus Medical Center (Rotterdam, The Netherlands) recently published results of a study to determine the long-term association of hemoglobin levels and anemia with risk of dementia.

During the study, serum hemoglobin was measured in 12,305 participants without dementia of the population-based Rotterdam Study (mean age 64.6 years, 57.7% women). Overall, 745 (6%) of the participants were classified as being anemic at the beginning of the study. Participants' hemoglobin levels were measured at the start of the study, and their health was monitored for an average of 12 years.

Results revealed that during the period of monitoring 1,520 individuals developed dementia, of who 1,194 had Alzheimer’s disease. Individuals with anemia were found to be 41% more likely to develop Alzheimer's disease and 34% more likely to develop any type of dementia than those who did not have anemia. Of the 745 people with anemia at the start of the study, 128 (17.2%) developed dementia, compared to 1392 (12%) of the 11,560 people who were not anemic.

"With around 10% of people over age 65 having anemia in the Americas and Europe and up to 45% in African and southeast Asian countries, these results could have important implications for the burden of dementia, especially as the prevalence of dementia is expected to increase threefold over the next decades, with the largest increases predicted in the countries where the anemia rate is the highest," said senior author Dr. M. Arfan Ikram, assistant professor of neuroepidemiology at Erasmus Medical Center. "More research is needed to determine whether hemoglobin levels play a direct role in this increased risk or whether these associations can be explained by underlying issues or other vascular or metabolic changes.”

The study was published in the July 31, 2019, online issue of the journal Neurology.