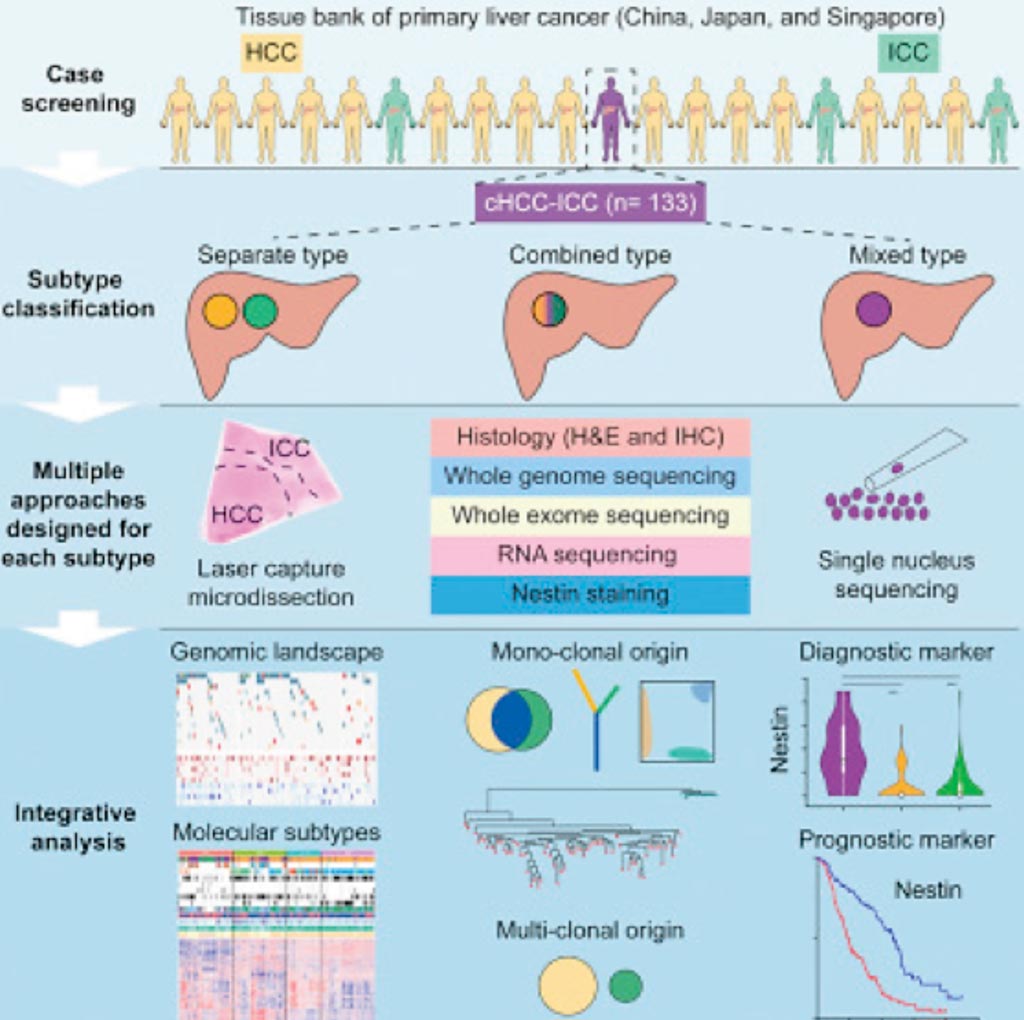 Combined hepatocellular-cholangiocarcinoma (cHCC-CC) is a rare type of primary liver cancer comprising histopathological features of both hepatocellular carcinoma (HCC) and cholangiocarcinoma (CC). Because of its rarity and controversial diagnostic criteria, it continues to be poorly understood with a lack of well-delineated treatment options for recurrent or metastatic disease.

A large team of scientists working with those at Peking University (Beijing, China) sequenced the genomes and transcriptomes of 133 cHCC-ICC cases, including ones belonging to the separate, combined, and mixed cHCC-ICC subtypes. In their pan-Asia, multi-center study they analyzed the cHCC-ICC samples using a combination of whole-exome, whole-genome, RNA, and single-nucleus sequencing. Based on established criteria, they were able to categorize 121 of these cHCC-ICC cases as separate, combined, or mixed cHCC-ICC subtypes.

Among all these samples, the most significantly mutated genes were TP53, AXIN1, and RB1, while signaling pathways involved in histone modification and DNA methylation were commonly altered in cHCC-ICC. In addition, they noted noncoding and structural variation, including variations affecting the TERT promoter and fusion genes as well as focally amplified and deleted regions. They also compared the mutational landscape of these cHCC-ICC samples with those found in HCC and ICC, finding that TP53 was mutated in nearly half of cHCC-ICC cases, much higher than in either HCC or ICC tumors, while cHCC-ICC cases had lower rates of CTNNB1 mutations than HCCs and lower rates of KRAS mutations than ICC.

The scientists suggested that the previous controversy over whether or not cHCC-ICC is a distinct type of liver cancer could be due to previous work only sampling one of these cHCC-ICC subtypes that resembled ICC or HCC to a certain extent. Both mixed and combined cHCC-ICCs are associated with a stem-like feature and exhibit poor prognosis, the team noted. Both types have high expression of nestin, a marker for the bipotent progenitor oval cell, which may give cancer cells high cellular plasticity. When they compared nestin levels in the various cHCC-ICC subtypes to HCC and ICC, they found that more than 80% of the cHCC-ICC samples had higher nestin levels than the HCC or ICC samples. This suggests that nestin may serve as a biomarker for diagnosing cHCC-ICC. The study was published on May 23, 2019, in the journal Cancer Cell.