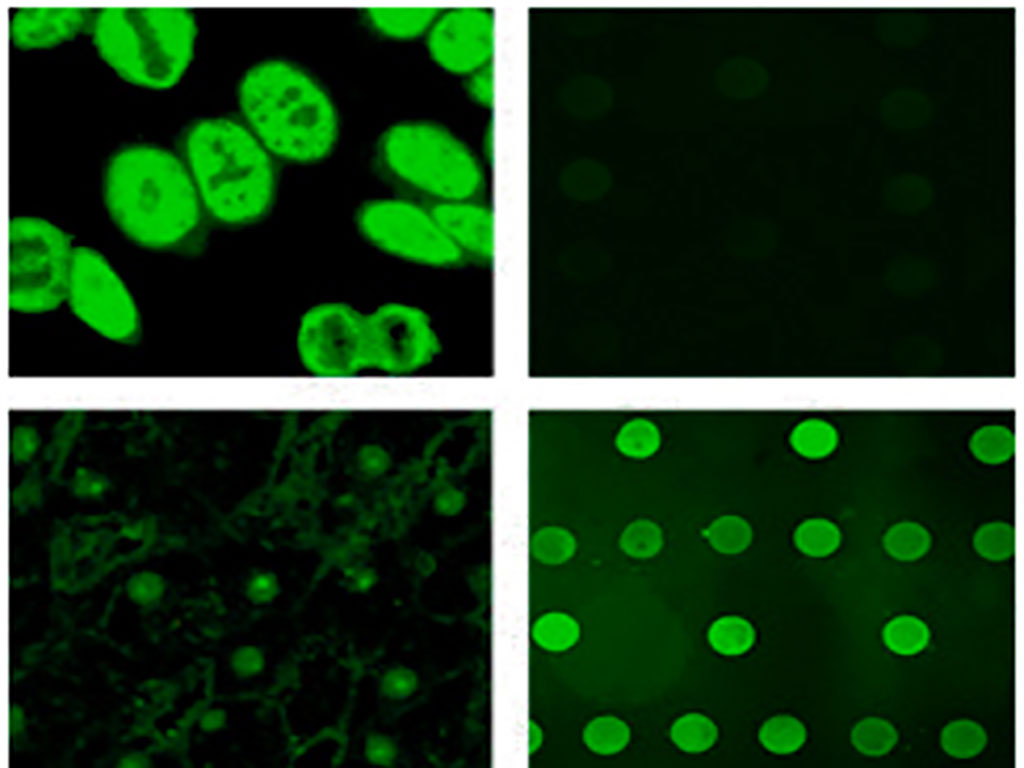 Image: The gold standard for the determination of antinuclear antibodies (ANA) is the indirect immunofluorescence test (IIFT) with human epithelial cells (HEp-2), which is known for its high sensitivity and specificity (Photo courtesy of Euroimmun)

Rheumatoid arthritis (RA) is a chronic and systemic autoimmune disease. It is characterized by synovial inflammation that can lead to irreversible joint damage and disability when not managed. Biomarkers of RA available for routine clinical use are rheumatoid factors (RF) and anti-cyclic citrullinated peptides (CCP-Ab).

Beta 2 Glycoprotein I (β2GPI) is a plasma protein and plays a key role in hemostasis, homeostasis, and immunity. Antibodies against β2GPI (aβ2GPI) have been associated with antiphospholipid syndrome (APS) pathogenicity. Common links between RA and APS have been reported. Glycosylation is implicated in the synthesis of highly pathogenic forms of antibodies to citrullinated proteins. Moreover, dysregulation of glycosylation could also generate antibodies of APS.

Immunologists at the Farhat-Hached University Hospital (Sousse, Tunisia) conducted a retrospective study that included sera of 67 patients with anti-β2 glycoprotein I antibodies (aβ2GPI) of IgA isotype. Ninety healthy blood donors (HBD) were used as a control group. The serum samples were evaluated for aCL-IgG, IgA, and IgM using a commercial enzyme-linked immunosorbent assay (ELISA; Orgentec Diagnostika, Mainz, Germany). Results were expressed as arbitrary units with a cutoff for positivity of 10 U/mL for IgA and IgG and 7 U/mL for IgM.

The determination of aβ2GPI IgG, IgA, and IgM was carried out with an Orgentec Diagnostika commercial ELISA, using a purified human β2GPI. The results were expressed as arbitrary units with a cutoff for positivity of 8 U/mL. Antinuclear antibodies screening was performed by the indirect immunofluorescence technique using human epithelial type 2 (HEp-2) as a substrate (Euroimmun, Hamburg, Germany). Detection of ANA at a dilution superior to or equal to 1:80 was considered a positive result.

The scientists reported that 17 patients and eight HBD had CCP-Ab and/or RF (25.4% versus 8.9%, odds ratio = 3.5). The frequency of CCP-Ab was significantly higher in patients than in healthy subjects (14.9% versus 3.3%). IgA isotype of RF was significantly higher in patients than in controls (7.5% versus 0%). In male patients, CCP-Ab and/or RF were more frequent than in healthy male subjects (37.5% versus 11.8%). In patients, no correlation was found between the levels of aβ2GPI-IgA and CCP-Ab. There was no correlation between the level aβ2GPI-IgA and the level of the isotypes of RF (IgG, IgA, and IgM).

The authors concluded that a high frequency of autoantibodies of RA in patients with aβ2GPI-IgA, suggesting that these patients could be at higher risk of developing RA. Following the clinical features and serological markers of these patients over the years could confirm this data. The study was published on June 6, 2022 in the Journal of Clinical Laboratory Analysis.