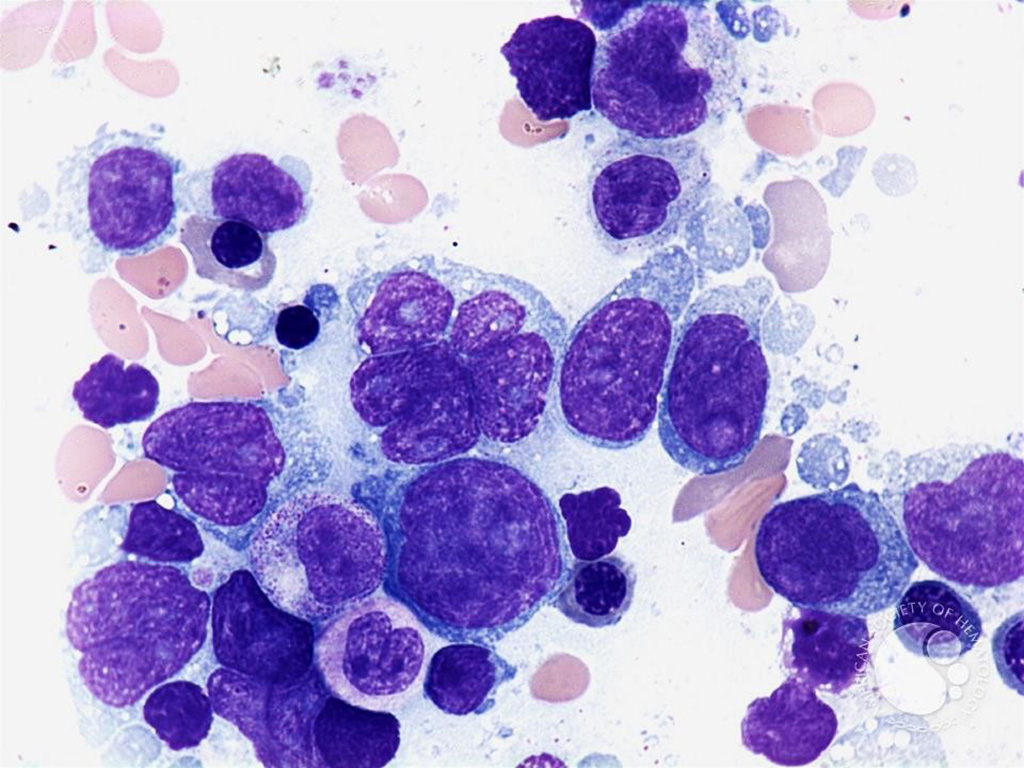 Image: Micrograph of a diffuse large B cell lymphoma, from a bone marrow aspirate; the nucleus may be convoluted and irregular (Photo courtesy of Peter Maslak)
The tumor microenvironment includes surrounding blood vessels, immune cells, fibroblasts, signaling molecules, and the extracellular matrix that encapsulate the cancerous cells. The non-lymphoma cells lingering in the tumor's microenvironment, for example, can modify the effect of the mutations.

Although gene alterations driving a tumor provide information about cancer cell aggressiveness, non-malignant cells of the tumor microenvironment have the potential to promote malignant growth by supporting immune evasion and enabling the development of new blood vessels. In the past few years, scientists have profiled the genomes of lymphomas, defined mutations that confer good and bad prognoses, and found several clinically actionable mutations.

Scientists at Weill Cornell Medicine (New York, NY, USA) and their colleagues at BostonGene Corporation (Boston, MA, USA) developed and deconvoluted transcriptomics signatures of lymphoma microenvironment (LME) cells and pathways from 3,026 diffuse large B-cell lymphomas (DLBCLs) from 13 datasets including a new cohort of 127 patients. Mutations were available for 562 patients of the datasets and for 22 patients from that cohort (whole-exome sequencing with matched normal). Applying density-based clustering they identified four LME signatures, independent of reported transcriptional and genetic classifications based on lymphoma cells.

The team applied density-based clustering to identify four lymphoma microenvironment signatures that provided prognostic information beyond what could be gleaned from just lymphoma cell transcriptomes and mutations. Two of the signatures, named "immunosuppressive" and "mesenchymal," were associated with making tumor mutations behave better, and the other two, called "anti-tumor immunity" and "depleted," were associated with making mutations behave worse.

When patients have a tumor mutation associated with poor prognosis in a good tumor microenvironment, that mutation may not be that bad, they showed. Conversely, when patients have a tumor mutation that usually indicates a good prognosis but it is in a bad microenvironment, that mutation can be detrimental. For example, double-hit (DH) lymphomas are well-known subgroups that harbor both BCL2 and MYC gene translocations. Considering the genetics alone, this subgroup is usually associated with a bad prognosis. However, when DH lymphomas exhibit a microenvironment subtype with a good prognosis, the prognosis of these DH lymphoma patients is usually improved.

Leandro Cerchietti, MD, an Oncologist and first author of the study, said, “We classified the tumors, we considered new categories that were not considered before to increase the precision of the diagnosis. It also offers the possibility of doing more precise clinical trials now that we have this information available for the patients.” The study was presented on December 9, 2019 at the American Society of Hematology annual meeting held in Orlando, FL, USA.