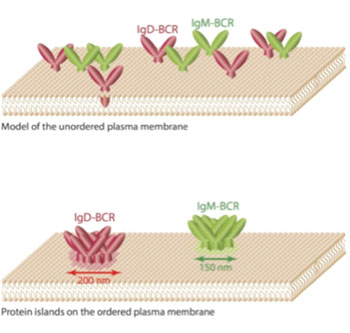 Image: Researchers previously assumed that receptors such as the antigen receptors of class Immunoglobulin M and Immunoglobulin D are freely diffusing and equally distributed molecules on the membrane. However, the new study shows that these antigen receptors are organized in different membrane compartments, also called \"protein islands\", with diameters of 150–200 nanometers (Photo courtesy of Reth Research Group, BIOSS Centre for Biological Signaling Studies of the University of Freiburg).
By applying several advanced imaging techniques, researchers have resolved the distribution of B-cell antigen receptors on the membranes of immune system lymphocytes.

The B-cell antigen receptors (BCRs) play an important role in the clonal selection of B-cells and their differentiation into antibody-secreting plasma cells. Mature B-cells have both immunoglobulin M (IgM) and IgD types of BCRs, which have identical antigen-binding sites and are both associated with the signaling subunits Ig-alpha and Ig-beta, but differ in their membrane-bound heavy chain isoforms.

Investigators at the BIOSS Centre for Biological Signaling Studies of the University of Freiburg (Germany) applied, two-color direct stochastic optical reconstruction microscopy (dSTORM), transmission electron microscopy (TEM), and the Fab-based proximity-ligation assay (Fab-PLA) to resolve the location and distribution of BCRs in the mature lymphocyte membrane.

Results published in the September 15, 2015, issue of the journal Science Signaling revealed that in contrast to the assumption that BCRs—like all proteins in the membrane—were freely diffusing molecules, dSTORM showed that IgM-BCRs and IgD-BCRs resided in the plasma membrane in different protein islands with average sizes of 150 and 240 nanometers, respectively. Upon B-cell activation, the BCR protein islands became smaller and more dispersed such that the IgM-BCRs and IgD-BCRs were found in close proximity to each other. Moreover, specific stimulation of one class of BCR had minimal effects on the organization of the other. These conclusions were supported by the findings from two-marker transmission electron microscopy and proximity ligation assays.

These results provide direct evidence for the nanoscale compartmentalization of the lymphocyte membrane. In addition, they suggest that upon B-cell activation, the different IgM and IgD protein islands form complexes, which allow the exchange of lipids and proteins. This could be the basis for the association of IgM with Raft-associated lipids and proteins, which is a well-known hallmark of B-cell activation.

The current study was a component of the University of Frieberg's BIOSS nanoscale explorer program (BiNEP), which is dedicated to developing better methods to resolve nano-structures that are smaller than the 250 nanometer diffraction limit of visible light.

Related Links:
BIOSS Centre for Biological Signaling Studies of the University of Freiburg