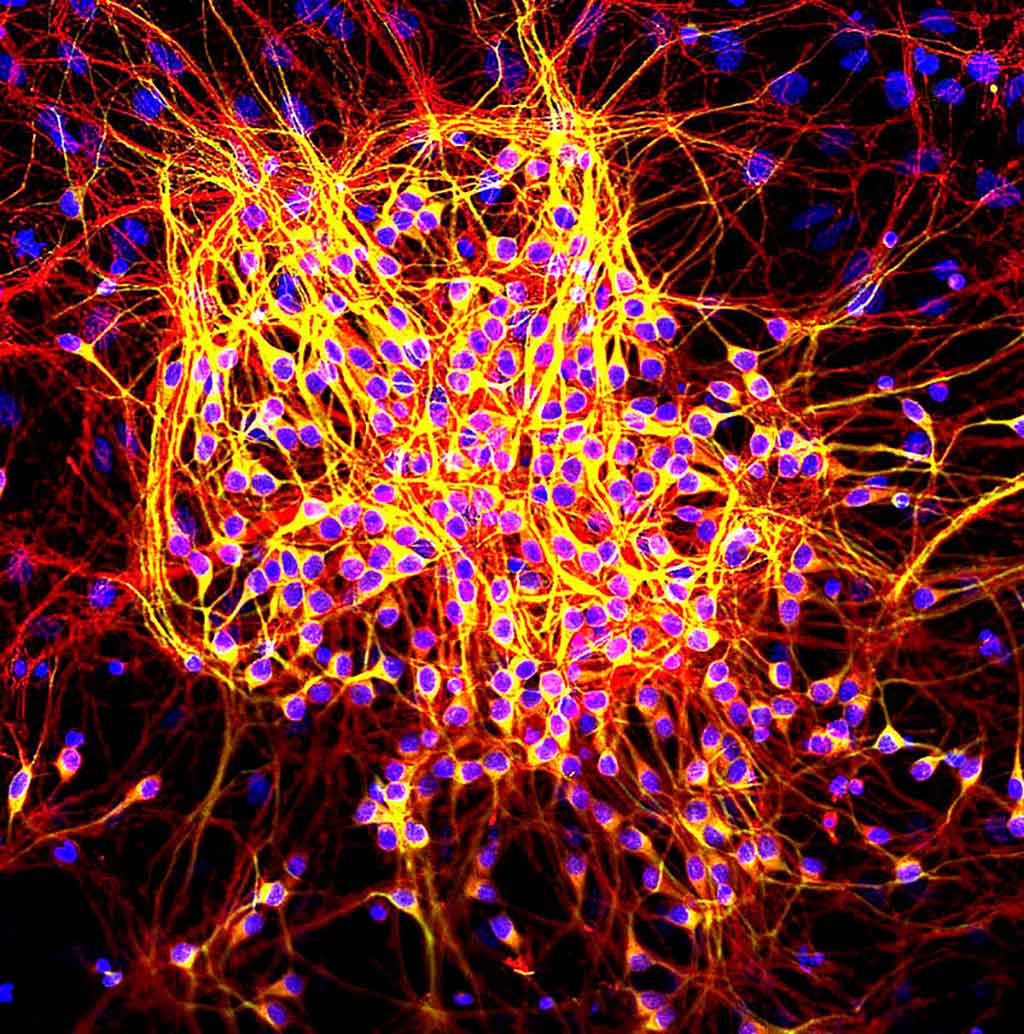 Image: Neurons were grown in tissue culture and stained with antibody to microtubule associated protein 2 (MAP2) protein in green and MAP tau in red. MAP2 is found only in dendrites and perikarya, while tau is found in these sites and in axons as well. DNA is shown in blue (Photo courtesy of EnCor Biotechnology Inc. via Wikimedia Commons)
A team of Swedish researchers has created an algorithm for use by physicians lacking access to advanced diagnostic instruments, which accurately predicts future risk of developing Alzheimer’s disease (AD).

Early and accurate diagnosis of AD is necessary to take advantage of a new generation of drugs designed to slow down the progression of the disease.

In this regard, investigators at Lund University (Sweden) hypothesized that the combination of plasma phosphorylated tau protein (P-tau) and other accessible biomarkers might provide accurate prediction about the risk of developing AD. They tested this theory by analyzing blood samples from 340 participants with subjective cognitive decline and mild cognitive impairment from the Swedish BioFINDER study and 543 participants from the North American Alzheimer’s Disease Neuroimaging Initiative (ADNI). Plasma P-tau, plasma Abeta42/Abeta40, plasma neurofilament light, APOE genotype, brief cognitive tests, and an AD-specific magnetic resonance imaging measure were examined using progression to AD as outcome.

Results revealed that within four years of the analysis, plasma P-tau217 predicted AD accurately (area under the curve (AUC) = 0.83) in the BioFINDER group. Combining plasma P-tau217, memory, executive function and APOE produced higher accuracy (AUC = 0.91). In the ADNI group, this model had similar AUC (0.90) using plasma P-tau181 instead of P-tau217.

The diagnostic model was used to predict the probability of an individual progressing to AD. Within two and six years, similar models had AUCs of 0.90–0.91 in both cohorts. Significantly, measuring cerebrospinal fluid P-tau, Abeta42/Abeta40, and neurofilament light instead of plasma biomarkers did not significantly improve the accuracy. Furthermore, this simple prognostic algorithm was significantly more accurate than clinical predictions by dementia experts who examined the patients, but did not have access to data generated by the algorithm.

“A combination of a simple blood test (measuring a variant of the tau protein and a risk gene for Alzheimer's) and three brief cognitive tests that only take 10 minutes to complete, predicted with over 90% certainty which patients would develop Alzheimer's dementia within four years. This simple prognostic algorithm was significantly more accurate than the clinical predictions by the dementia experts who examined the patients, but did not have access to expensive spinal fluid testing or PET scans,” said senior author Dr. Oskar Hansson, professor of neurology at Lund University. “The algorithm will enable us to recruit people with Alzheimer's at an early stage, which is when new drugs have a better chance of slowing the course of the disease.”

The Alzheimer’s disease diagnostic algorithm was described in the May 24, 2021, online edition of the journal Nature Medicine.