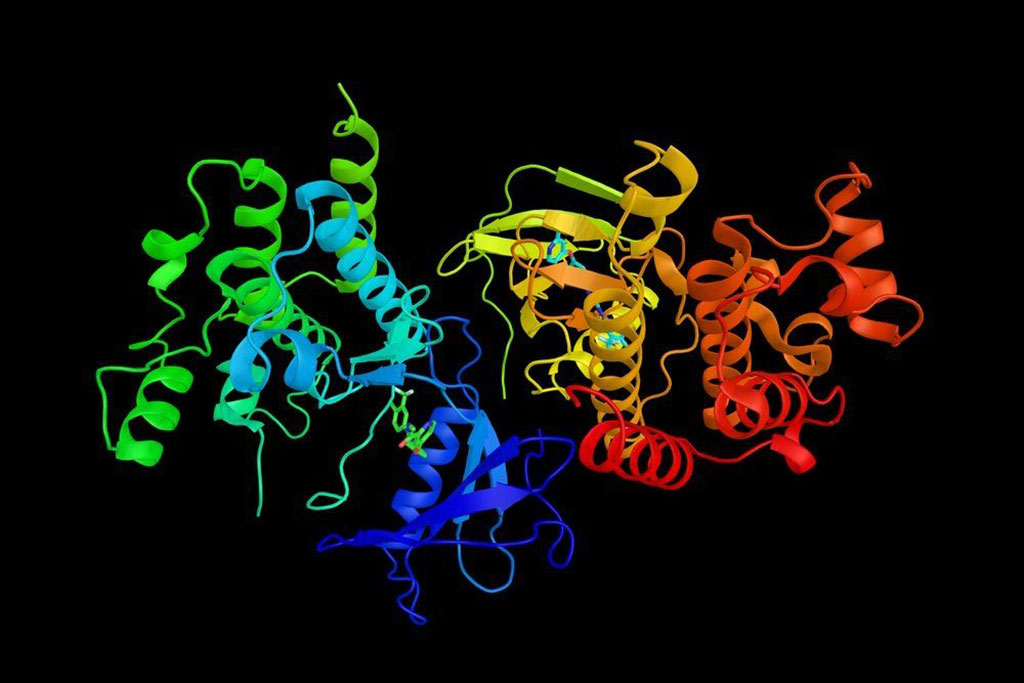 Image: BRAF, a protein involved in sending signals inside cells which are involved in directing cell growth, is mutated in some human cancers (Photo courtesy of www.123rf.com)

Mutations in BRAFV600E occur in around 10% of mCRC, and while relatively rare, they associate with a poor prognosis. Since a large fraction of mCRC patients do not respond to the recently approved combined anti-BRAF/EGFR therapy, there is an urgent need to identify the molecular determinants of treatment response.

In this regard, investigators at Vall d'Hebron Institute of Oncology (Barcelona, Spain) used whole-exome sequencing and targeted next generation sequencing (NGS) to analyze a discovery cohort of patients with mCRC(BRAF-V600E) treated with anti-BRAF/EGFR therapy. In addition, a control cohort of patients with mCRC(BRAF-V600E) receiving standard chemotherapies and anti-angiogenic agents (and not exposed to anti-BRAF) was evaluated. Data obtained from the molecular analyses were integrated with clinical correlates of response and survival.

Results revealed that inactivating mutations in RNF43, a negative regulator of the WNT signaling pathway, predicted improved response rates and survival outcomes in patients with microsatellite-stable (MSS) tumors. The response rate among patients with a BRAFV600E MSS mCRC carrying a RNF43 mutation reached 72.7%, and only 30.8% in those without the mutation. In patients with tumors harboring the RNF43 mutation, median disease-free progression was 10.1 months versus 4.1 months and overall survival in the former was 13.6 months compared to seven months in the latter.

The investigators concluded that patients with MSS-mCRC(BRAF-V600E) tumors harboring loss-of-function mutations in RNF43 responded favorably to combined anti-BRAF/EGFR therapy, whereas those with functional RNF43 derived limited benefit from this treatment.

"We performed extensive genomic analysis of over 20,000 genes. In total, we analyzed data from 166 patients which represents a significant number considering the rarity of this tumor subtype that accounts for around 10% of all colorectal cancers," said senior author Dr. Rodrigo A. Toledo, a translational investigator at Vall d'Hebron Institute of Oncology. "Our data point to RNF43 as a potential stratification biomarker that could help steer treatment decision making as well as define the optimal sequence of treatment in patients with microsatellite stable, BRAF V600E- mutant metastatic colorectal cancer. As importantly, it could also help to identify those patients for whom alternative treatment options are very much needed."

The study was published in the September 12, 2022, online edition of the journal Nature Medicine.