CSF biomarkers Compared for Down Syndrome and Inherited Alzheimer’s 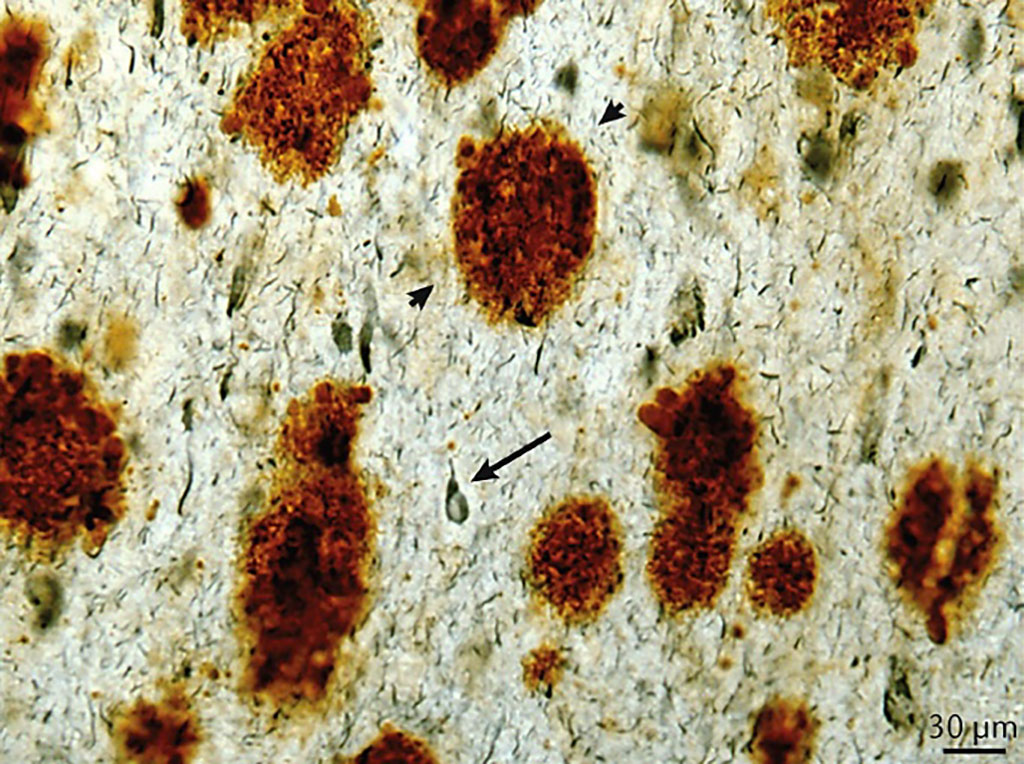 Image: Representative example of amyloid-β plaques (Aβ1-42; brown staining; arrowheads) and neurofibrillary tangles (PHF1 antibody; blue staining; arrow) in the frontal cortex of a 46-year-old person with Down syndrome and end-stage Alzheimer disease. (Photo courtesy of University of California, Irvine).
Although most people with Down’s syndrome will experience brain changes as they age, not everyone will develop Alzheimer’s disease or another type of dementia. Whilst having Down’s syndrome does put a person at increased risk, estimated at 1 in 3 people in their 50s, and closer to 2 in 3 aged over 60, it is not inevitable for all.

A large team of Neuroscientists led by those at Washington University School of Medicine (St. Louis, MO, USA) and their colleagues carried out a cross-sectional study that included 341 individuals (178 [52%] women, 163 [48%] men, aged 30–61 years). Participants were 41 adults with Down syndrome, similarly aged carriers of autosomal dominant Alzheimer's disease mutations (n=192), and non-carrier siblings (n=108). Participants with baseline cerebrospinal fluid (CSF), available clinical diagnosis, and apolipoprotein E genotype as of January 31, 2019, were included in the analysis.

The team reported that individuals with Down syndrome had patterns of Alzheimer's disease-related CSF biomarkers remarkably similar to carriers of autosomal dominant Alzheimer's disease mutations, including reductions in Aβ 1-42 to Aβ 1-40 ratio and increases in markers of phosphorylated tau-related processes; neuronal, axonal, and synaptic injury; and astrogliosis and neuroinflammation, with greater degrees of abnormality in individuals with dementia. Differences included overall higher concentrations of Aβ and YKL-40 in Down syndrome and potential elevations in CSF tau and NfL in the asymptomatic stage (i.e., no dementia symptoms). The study was published in the August edition of the journal Lancet Neurology.