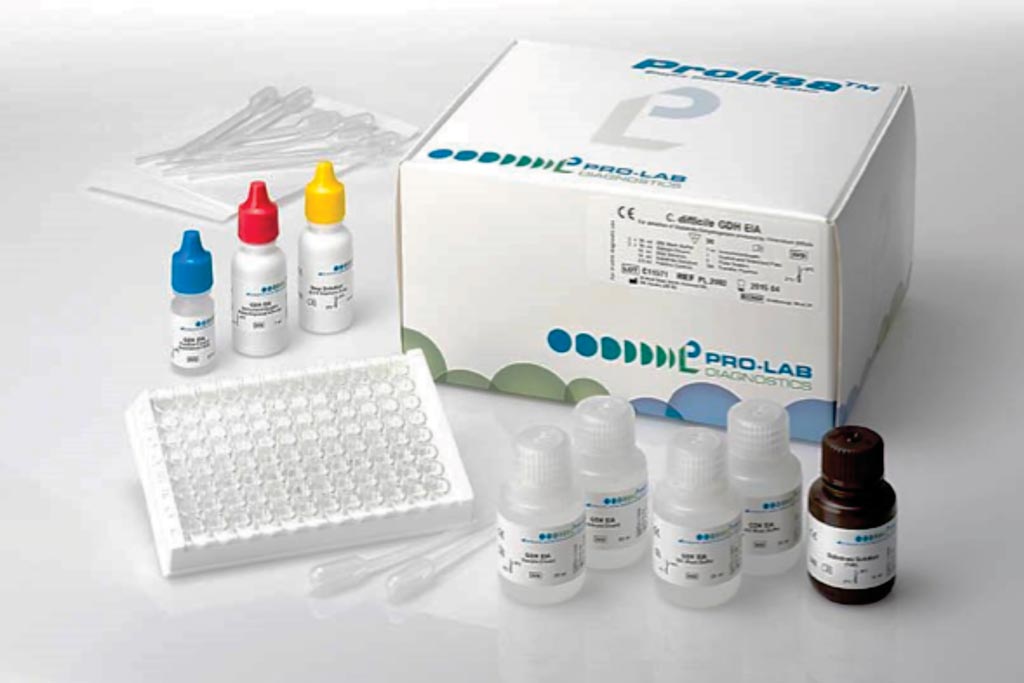 The Prolisa C. difficile GDH EIA is a microwell assay for the qualitative detection of Clostridium difficile glutamate dehydrogenase (GDH) in fecal specimens. The test is intended for use as an aid in the diagnosis of C. difficile infections (Photo courtesy of Pro-Lab Diagnostics).
Clostridioides (Clostridium) difficile infection (CDI) is the leading cause of health care-associated infections in the USA. It accounts for 15% to 25% of health care-associated diarrhea cases in all health care settings, with 453,000 documented cases of CDI and 29,000 deaths in the USA in 2015.

A large team of international scientists led by those at Emory University (Atlanta, GA, USA) conducted a review of how effective newer nucleic amplification tests (NAAT) testing practices were for diagnosing patients suspected of CDI. They evaluated NAAT tests alone, which detects the toxin gene, as well as algorithmic testing (NAAT plus glutamate dehydrogenase (GDH) or toxin EIA). GDH Enzyme Immunoassay (EIA) testing detects the enzyme active in the organism, so effectively the organism, and toxin EIA detects the toxin protein. The scientists evaluated over 11,000 records found in electronic databases. 72 studies had sufficient data for meta-analysis.

The team concluded that the NAAT is the recommended practice for detecting the toxin gene. GDH/NAAT algorithm is recommended for detecting C. difficile organism/toxin gene. The overall strengths of evidence for these practices were high and effects across studies were consistent. The GDH/TOXIN/NAAT algorithm is recommended for the C. difficile organism/toxin/toxin gene, although the overall strength of evidence for this practice was moderate. The scientists had no recommendation for repeat testing using NAAT-only testing within seven days of a negative result.

Colleen Kraft, MD, MSc, the lead author of the study, said, “This study emphasizes the issues related to the diagnosis of C. difficile infection, with the focus on nucleic-acid amplification tests (NAAT). We found in this systematic review that most of the studies we looked at did not have pre-analytic and clinical outcomes data. Our hope is that future studies will consider those aspects in order to determine the utility of these tests in patient diagnosis and patient care.” The study was published on May 29, 2019, in the journal Clinical Microbiology Reviews.