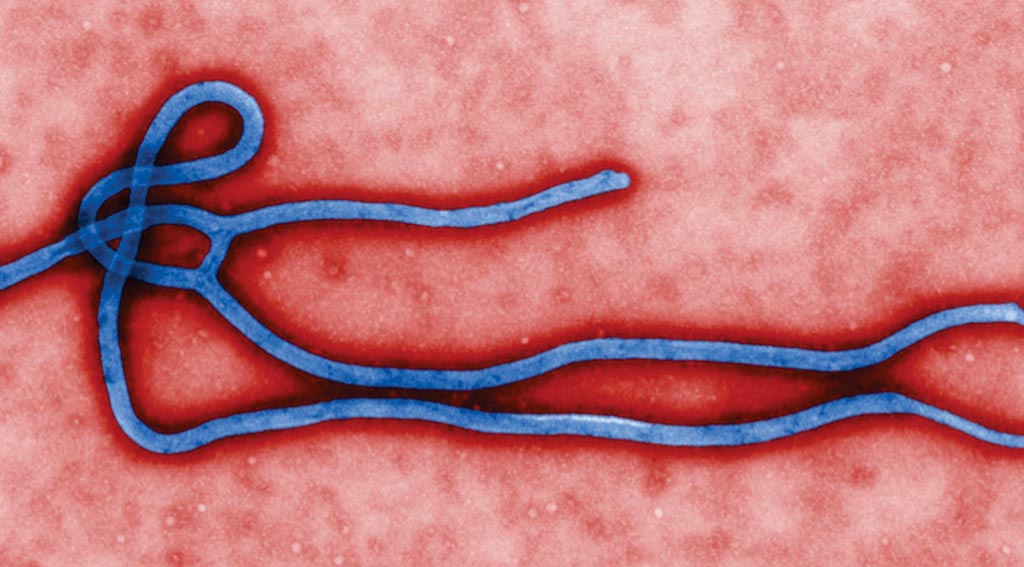 Image: A digitally colorized, transmission electron microscopic (TEM) image, which reveals some of the ultrastructural morphology displayed by an Ebola virus virion (Photo courtesy of Cynthia Goldsmith / CDC).
Ebola and Marburg viruses can cause severe bleeding and organ failure, with fatality rates reaching 90% in some outbreaks. The diseases spread through direct contact with bodily fluids of an infected person, monkey, gorilla, chimpanzee or bat.

Early symptoms of Ebola and Marburg, include fever, headache and diarrhea, and mimic more common diseases, so there's a critical need for a rapid diagnostic test. Such a test could help in efforts to limit outbreaks by quickly quarantining infected persons. But existing diagnostic tests either are inaccurate or are expensive and require extensive training to administer.

Scientists at the Loyola University Health System (Maywood, IL, USA) have generated a panel of mouse single-chain Fv-antibodies (scFvs) to filovirus glycoproteins (GPs) using cell-free ribosome display and determined their cross-reactivity profiles to all known filovirus species. Antibodies could be the key to diagnosing Ebola and Marburg viruses. An antibody is a Y-shaped protein made by the immune system. When a virus or other pathogen invades the body, antibodies mark it for the immune system to destroy.

The team used a technology called cell-free ribosome display, and generated two synthetic antibodies that bind to all six Ebola and Marburg viruses. The study involved the use of non-hazardous proteins that sit on the surface of Ebola and Marburg viruses. Because the actual viruses were not used in the study, there was no risk of infection to the scientists or the public. The antibodies, which are inexpensive to produce, potentially could be used in a simple filter paper test to detect Ebola virus and the related Marburg virus. If the filter paper turns color, the virus is present. The study was published on May 6, 2019, in the American Journal of Tropical Medicine & Hygiene.