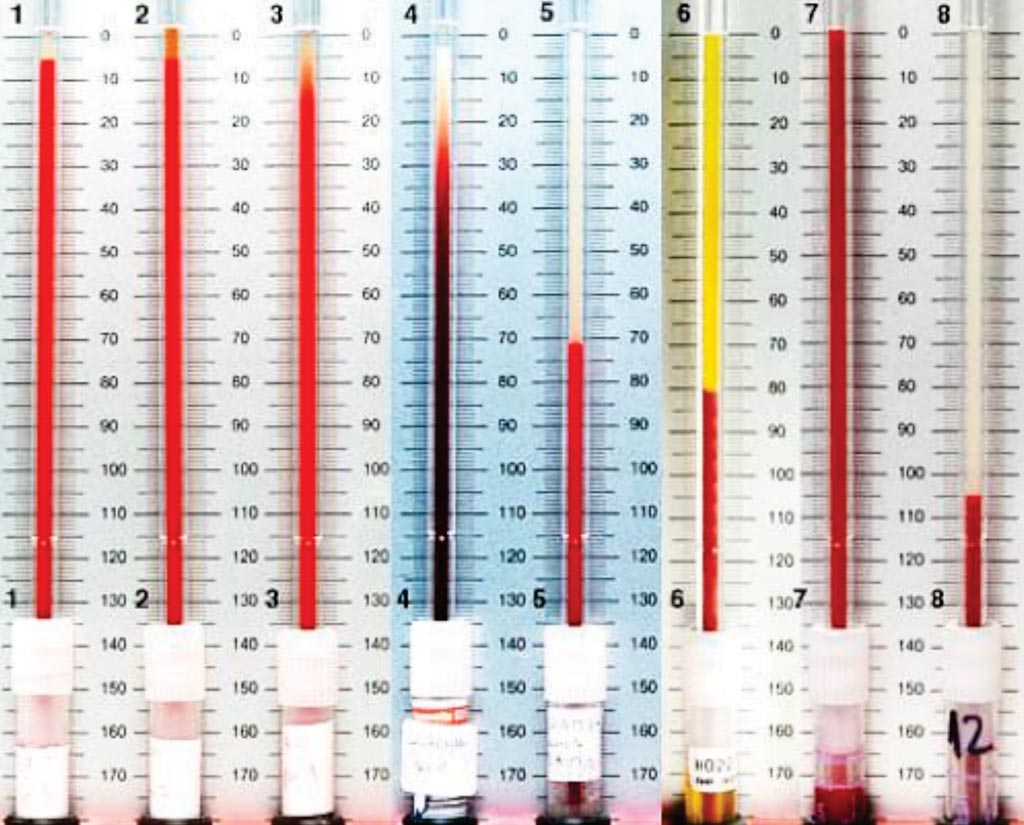 Image: Examples of erythrocyte sedimentation rates (ESR) from normal to pathological conditions. This test indirectly measures the degree of inflammation present in the body (Photo courtesy of The Netherland Association for Hematology).
Inflammation is part of the complex biological response of body tissues to harmful stimuli, such as pathogens, damaged cells, or irritants, and is a protective response involving immune cells, blood vessels, and molecular mediators.

Inflammation during late adolescence may be associated with early death from cancer and cardiovascular disease (CVD). Despite increasing interest in the role of childhood and adolescent exposures in later-life disease, little is known about the long-term implications of early inflammation.

An international team of scientists led by the Memorial Sloan Kettering Cancer Center (New York, NY, USA) investigated the potential link between inflammation in late adolescence and death. The study included 106,120 seemingly Swedish healthy men who had undergone medical examination to assess their ability to carry out military service. Of these, 105,460 (99.4%) were aged 18 to 20 years at the time of examination.

Inflammation was measured by erythrocyte sedimentation rate (ESR), a nonspecific marker of inflammation. Erythrocyte sedimentation rate was categorized as low (≤10 mm/h), moderate (>10-<15 mm/h), and high (≥15 mm/h); the threshold from moderate to high ESR corresponds to the clinical cutoff for normal ESR among adolescents and men in this age group. Men were observed for death until January 1, 2010, unless censored because of emigration. Underlying causes of death included cancer (n = 1,105), cardiovascular disease (CVD) (n = 874), alcohol or drugs (n = 280), and suicide, traffic accidents, or falls (n = 1,502).

The authors concluded that their results suggest that ESR among ostensibly healthy men in late adolescence marks something beyond that captured by manifested adolescent health conditions. Results demonstrate the need to better understand the role of subclinical early-life inflammation in relation to later-life health outcomes.

Elizabeth D. Kantor, PhD, MPH, the lead author of the study, said, “While the exact underlying mechanisms are unclear, inflammation has been implicated in the development of both cancer and atherosclerosis, and these data highlight the existence of detectable markers of premature mortality at an early stage of life.” The study was published on September 3, 2019, in the journal JAMA Pediatrics.