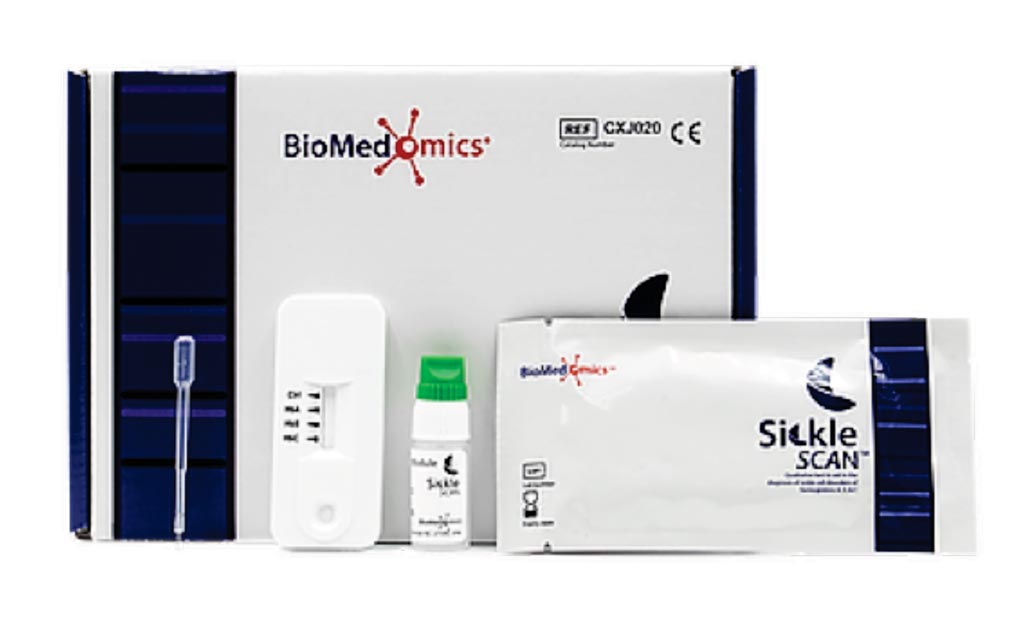 Image: Sickle SCAN is a multiplexed qualitative point-of-care immunoassay used for the rapid diagnosis of sickle cell disorders. The test is made up of three indicators which detect the presence of hemoglobin A, S, and C, allowing the user to rapidly distinguish between normal, carrier, and sickle cell samples (Photo courtesy of BioMedomics).
Sickle cell disease (SCD) is an inherited disorder that affects the production of hemoglobin, a protein in red blood cells that delivers oxygen to cells throughout the body. This abnormal hemoglobin can cause red blood cells to become rigid and sickle shaped.

These sickle cells stick together and can block the flow of blood and oxygen throughout the body, leading to intense pain and other serious issues such as stroke, infection, pulmonary complications, and even death. Experts stress that, for migrants with known or undiagnosed SCD, the extreme conditions during their travels, such as dehydration, psychological stress, and exposure to very high or low temperatures, can trigger severe pain crises. Delays in care can lead to severe organ complications and death.

Scientists at the University of Verona (Verona, Italy) and their colleagues analyzed data from 13 Italian reference centers from 2014 to 2017, SCD was relatively common in refugees, and it was primarily identified when individuals went to emergency departments for acute sickle cell-related events. The rates of anemia were higher among refugees than in the native Italian SCD population, which could be due to malnutrition.

The group pilot tested a program that screened all refugees at a single refugee center using one of the new rapid point-of-care screening devices called Sickle SCAN (BioMedomics, Inc, Durham, NC, USA), the results of which were then validated using the gold standard laboratory test. Front-line health providers in refugee centers and emergency department personnel were trained to recognize the signs and symptoms of SCD and intervene to provide necessary care.

A total of 70 patients with hemoglobin disorders were identified, the majority of whom were male. Half were adults with the median age of 21 years and the other half were children. Most came from West African countries Senegal and Nigeria, as well as Morocco, Egypt, and Tunisia in North Africa, and Syria in the Middle East. During this same four-year period, the team reported a total of 624,688 refugees arrived on the Italian coast. The overall genotypic distribution was as follow: 49 with SS, nine with SC, three with Sβ-thalassemia, two with CC, and one with AS, and six with transfusion-dependent β-thalassemia (TDT). The analysis of genotypes combined with patient origin revealed that 61.4% of the SS individuals identified were from sub-Saharan Africa.

Lucia De Franceschi, MD, a professor and the lead author of the study, said, “Our data underscore the need to more systematically screen refugees coming from areas where SCD is endemic and suggest a strong national network might help to spur action. Early identification of cases can help prevent severe SCD-related events and life-threatening complications and redirect patients to comprehensive SCD centers for specialty clinical management, follow-up, and timely initiation of treatment.” The study was published on May 9, 2019, in the journal Blood.