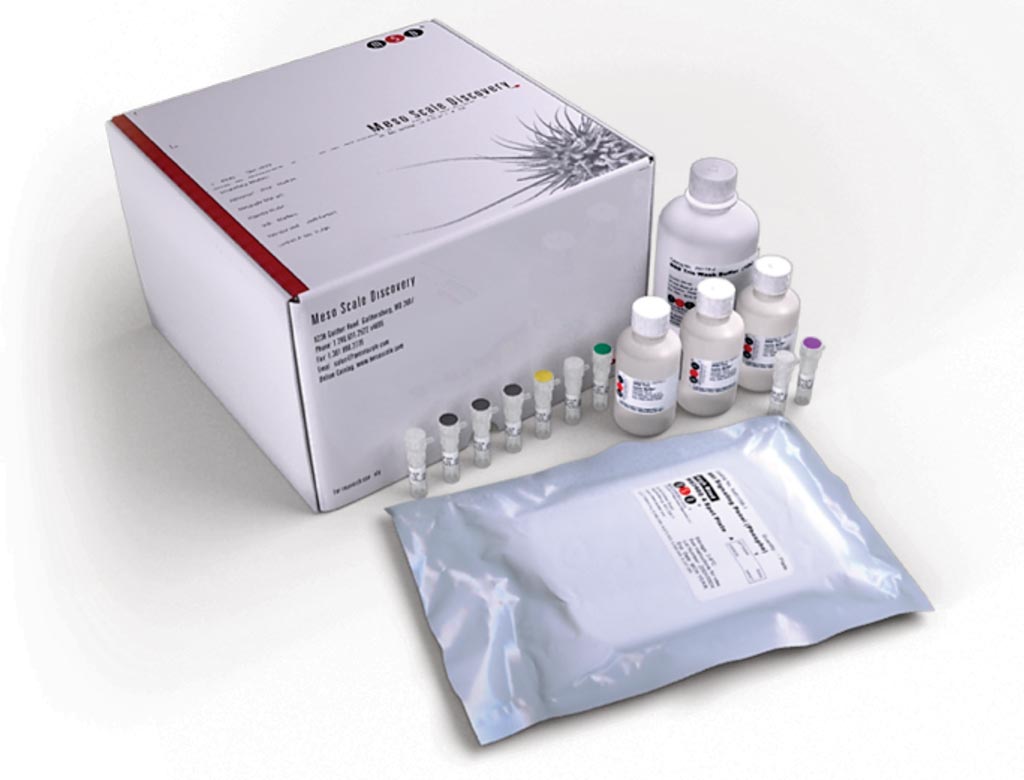 Image: The V-PLEX Aβ Peptide Panel 1 (6E10) Kit (Photo courtesy of Meso Scale Discovery).
Alzheimer's disease (AD) pathology is accompanied by misfolding of amyloid-β (Aβ) and tau from monomeric into β-sheet–enriched pathogenic species. This process is suggested to precede about 10 to 15 years before clinical onset of the disease.

A new two-step diagnostic process could detect Alzheimer's disease nearly a decade before clinical symptoms appear. It's hoped that the method, which involves the measurement of both amyloid and tau proteins in blood and cerebrospinal fluid, will improve the results of clinical trials by helping better identify patients at the earliest stages of the disease.

A team of scientists working with the Ruhr-University Bochum (Bochum, Germany) carried out a prospective study of 61 disease control (DC) subjects and 39 AD cases were acquired from a prospective study designed and initiated by a gerontopsychiatric unit of the department of psychiatry and psychotherapy between 2009 and 2013. For all subjects, CSF levels of Aβ40, Aβ42, ttau, ptau, the Aβ42/40 ratio, and demographic data were available.

All CSF samples were assessed with the Meso Scale Discovery V-PLEX Aβ peptide panel multiplex kit using monoclonal antibody 6E10 for detection. The Aβ peptides Aβ38, 40, and 42 were determined after 16-fold dilution of the CSF samples with “Diluent 35” (MSD). CSF concentrations of ttau and ptau were measured in duplicate by commercially available ELISA in an accredited expert laboratory for CSF-guided neurochemical dementia diagnostics. An immuno-infrared sensor was functionalized with a monoclonal antibody for Aβ detection in blood plasma and CSF and monoclonal antibody TAU-5 for tau detection in CSF, respectively. The recorded amide I absorbance band represented the biomarker secondary structure distribution in the respective body fluid by its maximum frequency.

The scientists said that through the combination of both analyses, 87 of 100 Alzheimer's patients were correctly identified in their study and they reduced the number of false positive diagnoses in healthy subjects to 3 of 100. The second analysis is carried out in cerebrospinal fluid that is extracted from the spinal cord. At this stage the second diagnostic test for tau proteins can only be measured using cerebrospinal fluid. Due to the invasive nature of collecting cerebrospinal fluid the team admitted this is not ideal, and work is underway to find effective ways to detect tau in blood samples. However, the two-step process can be rolled out relatively soon in its current form, with the suggestion the second cerebrospinal fluid test be only carried on subjects testing positive in the first blood test.

Klaus Gerwert, PhD, a professor and senior author of the study, said, “Now, new clinical studies with test participants in very early stages of the disease can be launched. Recently, two major promising studies have failed, especially Crenezumab and Aducanumab – not least because it had probably already been too late by the time therapy was taken up. The new test opens up a new therapy window.” The study was published online on March 12, 2019, in the journal Alzheimer's & Dementia: Diagnosis, Assessment & Disease Monitoring.