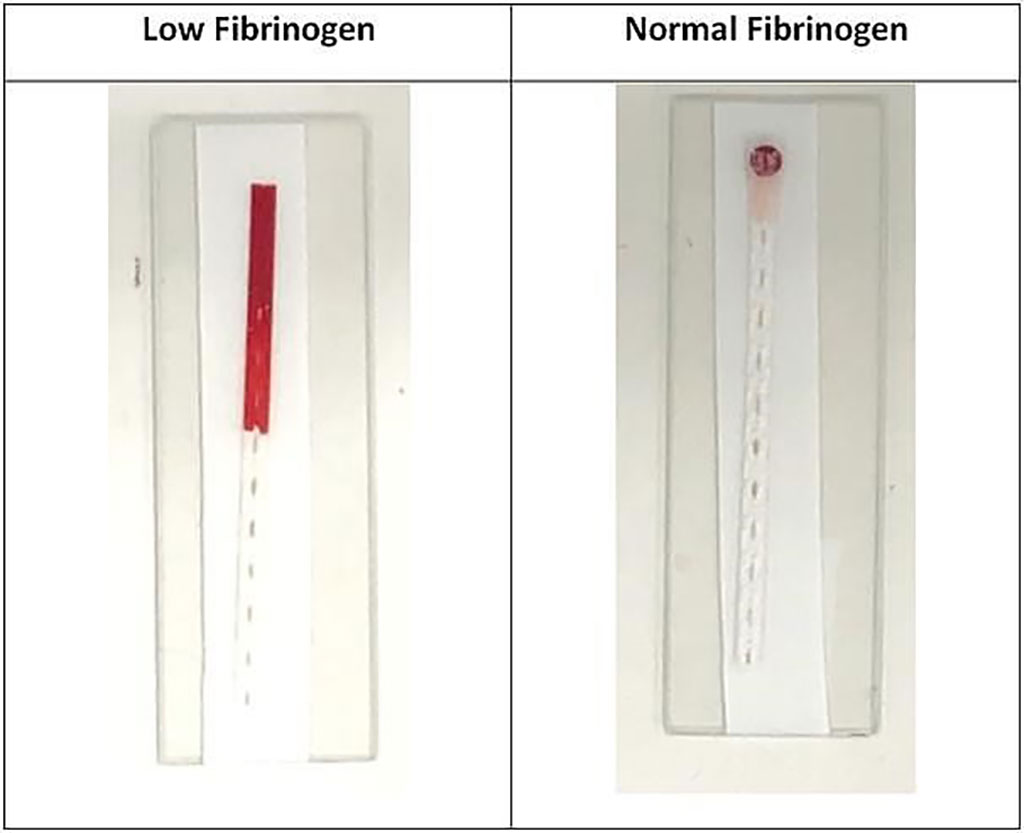 Image: Fibrinogen Test: people with low fibrinogen levels show a rapid movement of blood up the device (Photo courtesy of Monash University).
Fibrinogen is a protein found in blood that is needed for clotting. When a patient experiences traumatic injury, such as a serious car accident, or major surgery and childbirth complications, fibrinogen is required in their blood to prevent major hemorrhaging and death from blood loss.

Typically, heavily bleeding patients must be transported to a hospital or emergency center where they undergo diagnostic tests before being treated. These tests are time consuming and costly as they require expensive equipment, specialized or trained personnel and can take up to half an hour. More than 20% of major trauma patients have hyperfibrinogenemia.

Chemical Engineers at Monash University (Clayton, Australia) developed a handheld fibrinogen diagnostic device that works with whole blood. The test works by placing a pre-mixed droplet of a blood sample and an enzyme solution onto a solid surface, allowing it to clot, and then dropping a paper strip on top. The further that blood moves down the strip of paper, the lower the fibrinogen concentration. The diagnostic can work with a variety of blood conditions. Furthermore, diluting blood samples not only increases the test's sensitivity, but also eliminates the effect of interfering substances in the blood.

The further that blood moves down the strip, the lower the fibrinogen concentration. The diagnostic can easily measure plasma fibrinogen concentrations below 1.6 g/L for blood samples with hematocrits between 40 and 50%. The test can be completed in 3 to 4 minutes, making it suitable for diagnosing early hypofibrinogenemia and allowing for fibrinogen replacement therapy in critically bleeding patients.

Gil Garnier, PhD, a Professor of Chemical Engineering and senior author of the study, said, “This diagnostic will allow emergency doctors and paramedics to quickly and accurately diagnose low levels of fibrinogen in patients, giving them faster access to life-saving treatment to stop critical bleeding. When a patient is bleeding heavily and has received several blood transfusions, their levels of fibrinogen drop. Even after dozens of transfusions, patients keep bleeding. What they need is an injection of fibrinogen. However, if patients receive too much fibrinogen, they can also die.” The study was published on October 23, 2020 in the journal ACS Sensors.