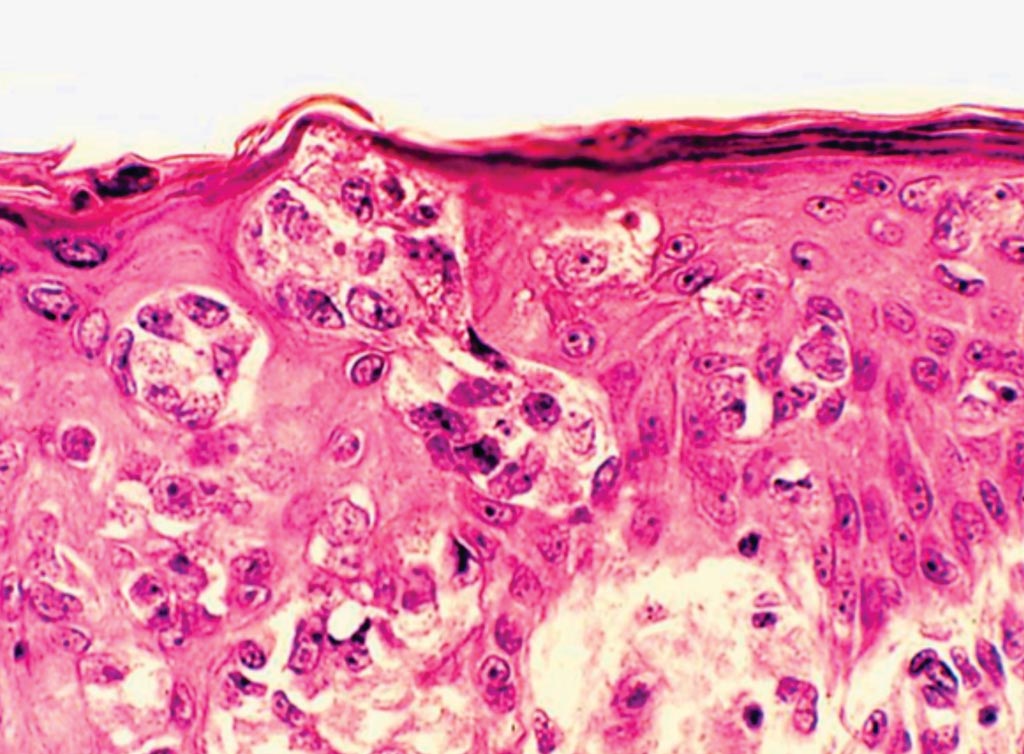 Image: A histopathology of castration-resistant prostate cancer (Photo courtesy of Andrew J. Armstrong, MD, ScM).
Heterogeneity in the genomic landscape of metastatic prostate cancer has become apparent through several comprehensive profiling efforts, but little is known about the impact of this heterogeneity on clinical outcome.

A large international team of scientists led by the Memorial Sloan Kettering Cancer Center (New York, NY, USA) used exome sequencing and RNA sequencing to assess coding mutations and transcriptomic features in samples from more than 400 individuals with metastatic, castration-resistant prostate cancer (mCRPC) who also had clinical data available. They focused on a matched tumor-normal dataset for 429 mCRPC patients treated at seven centers around the world, using exome sequencing to profile coding alterations in 444 prostate, lymph node, bone, liver, lung, or other biopsy samples from these cases. They also performed RNA sequencing on 332 tumor samples from a subset of 323 mCRPC patients.

The team used these genomic and transcriptomic data, and looked at the frequency and interactions between new and known genomic alterations in the advanced prostate cases, identifying frequent mutations in genes such as the androgen receptor gene AR, ETS, TP53, or PTEN, as well as co-occurring alterations affecting genes such as CDK12, CDK4, and CCND1 that fall in cell cycle pathways previously linked to potential immune activity against tumors. When they focused on 18 recurrently mutated genes in 128 patients who received androgen receptor signaling inhibitor drugs, they saw ties between relapse, or shorter time on treatment, and shifts in genes such as AR, TP53, or RB1. The RB1 gene alterations alone showed significant interactions with patient survival following androgen receptor signaling inhibitor treatment, the scientists reported, though chromosomal aneuploidy in general also tended to correspond with shorter survival times and relapse.

The authors concluded that that RB1 loss is the molecular factor most strongly associated with poor clinical outcomes in a contemporary cohort, highlighting the need for further investigation into mechanisms of resistance to AR therapies induced by loss of RB, and potential therapeutic strategies targeting this mechanism. The study was published on May 6, 2019, in the journal Proceedings of the National Academy of Sciences.