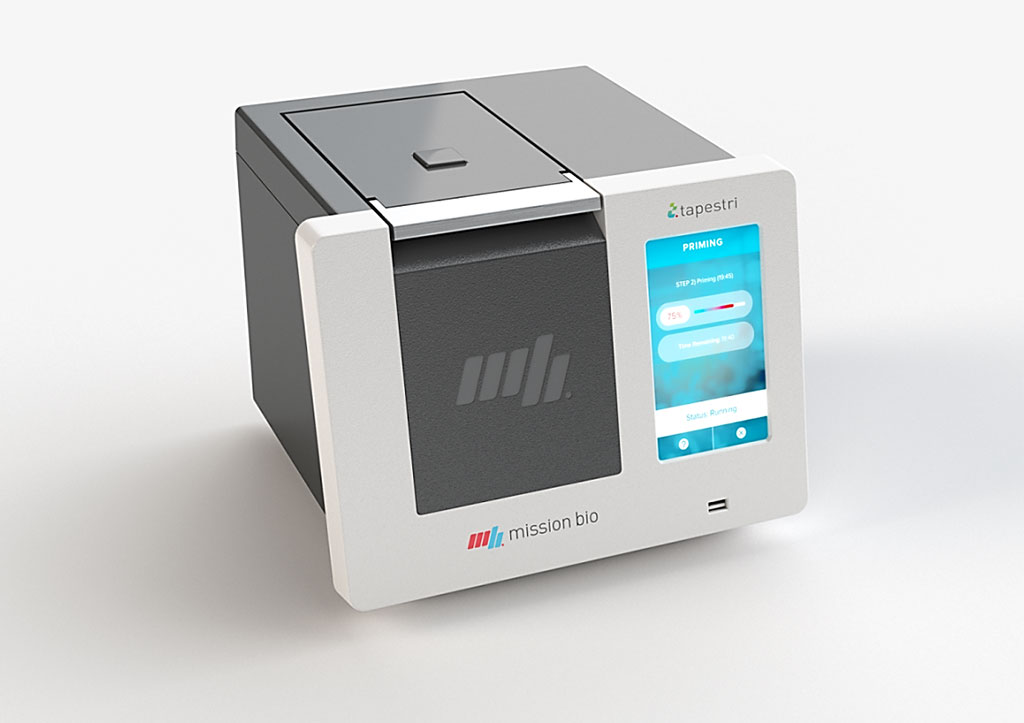 Image: The Tapestri Platform is the first and only single-cell multi-omics platform that is capable of simultaneously providing both genotype and phenotype data from the same cell, across thousands of cells (Photo courtesy of Mission Bio).
Myeloid malignancies are clonal diseases of hematopoietic stem or progenitor cells. Myeloid malignancies, including acute myeloid leukemia (AML), arise from the expansion of these hematopoietic stem and progenitor cells that acquire somatic mutations.

A large team of Hematologist and Oncologists at the Memorial Sloan Kettering Cancer Center (New York, NY, USA) delineated the clonal framework of myeloid malignancies. They performed single-cell mutational profiling on 146 samples from 123 patients, mapping clonal trajectories for each sample and observing mutations that combined to promote clonal expansion and dominance. The investigators also combined protein expression with mutational analysis to map somatic genotype and clonal architecture with immunophenotype. Overall, they said, these findings provided insights into the pathogenesis of myeloid transformation and how clonal complexity evolves with disease progression.

The number of mutations per sample was significantly higher in AML than in myeloproliferative neoplasms (MPN) and in MPN than in clonal hematopoiesis (CH). The increase in mutations per sample was more pronounced in cases of AML with signaling effector mutations, specifically those in RAS and FLT3. The investigators were then able to identify gene-specific contributions to clonal expansion, finding that IDH2, NPM1, and JAK2 mutations were nearly always present in the dominant clone, whereas FLT3 and RAS mutations were present only in minor subclones in some patients, and in dominant clones in others. In four out of six patients in whom the disease transformed from MPN to AML, they observed a significant alteration in clonal architecture, with emergence of new dominant clones.

The authors concluded that the data suggested that myeloid malignancies manifest as a complex ecosystem of clones that evolves over time, and that scDNA-seq gives a glimpse into this milieu that is not seen with conventional bulk sequencing. Studies of clonal architecture at a single-cell level give us insights into how clonal complexity contributes to the pathogenesis of myeloid transformation. The study was published on October 28, 2020 in the journal Nature.