CRISPR Protein Could Yield New Tests for Many Viruses 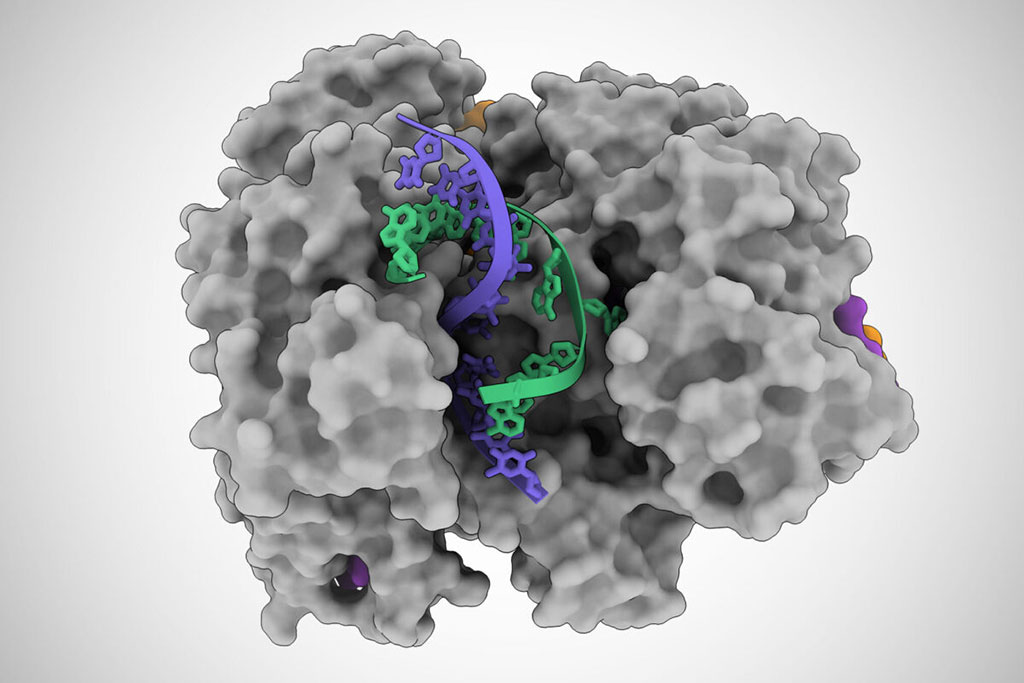 Image: A Cas12a2 protein unzips a DNA double helix, allowing it to cut the single strands of DNA (Photo courtesy of University of Texas at Austin)

In a first for the genetic toolset known as CRISPR, a recently discovered protein has been found to act as a kind of multipurpose self-destruct system for bacteria, capable of degrading single-stranded RNA, single-stranded DNA and double-stranded DNA. With its abilities to target so many types of genetic material, the discovery holds potential for the development of new inexpensive and highly sensitive at-home diagnostic tests for a wide range of infectious diseases, including COVID-19, influenza, Ebola and Zika.

Using a high-resolution imaging technique called cryo-EM, researchers at the University of Texas at Austin (Austin, TX, USA) discovered that when this protein, named Cas12a2, binds to a specific sequence of genetic material from a potentially dangerous virus, called a target RNA, a side portion of Cas12a2 swings out to reveal an active site, similar to a sprung-open switchblade knife. Then, the active site starts to indiscriminately cut any genetic material it comes into contact with. The researchers discovered that, with a single mutation to the Cas12a2 protein, the active site degrades only single-stranded DNA - a feature especially useful in developing new diagnostics tailored for any of a wide range of viruses.

A test based on this technology could theoretically combine the best features of PCR-based tests that detect genetic material from a virus (high sensitivity, high accuracy and the ability to detect an active infection) with the best features of rapid at-home diagnostic tests (inexpensive to produce without requiring specialized lab equipment). It also would be easily adaptable to any new RNA virus. Such a diagnostic would still require separate work and probably involve collecting saliva or a nasal sample from a patient to be mixed with the team’s modified Cas12a2 protein, the piece of guide RNA that acts like a mug shot to identify a specific virus, and a fluorescent probe designed to light up when its single-stranded DNA gets cut. CRISPR is the name for a set of tools that occur naturally in bacteria, but which scientists have adapted for use in gene editing. This is the first CRISPR protein that has been found to degrade such a wide range of genetic material.

“If some new virus comes out tomorrow, all you have to do is figure out its genome and then change the guide RNA in your test, and you’d have a test against it,” said David Taylor, an associate professor of molecular biosciences at The University of Texas at Austin and co-corresponding author of the new study.