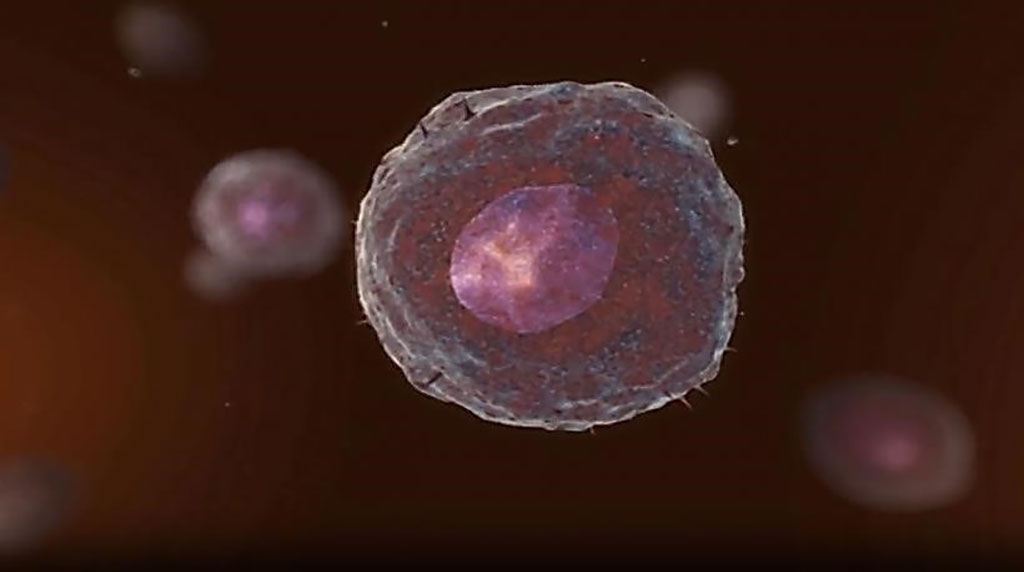 Image: Circulating tumor cells (CTCs) are cancer cells that are released and disseminated into the bloodstream and lymphatic system. CTC cultures were successfully propagated from breast epithelial cells (Photo courtesy of Menarini Silicon Biosystems).
Cancer metastasis is responsible for most cancer-associated death. During metastasis, cells that escape the primary tumor into the circulatory system are known as circulating tumor cells (CTCs).

Circulating tumor cells represent a unique population of cells that can be used to investigate the mechanistic underpinnings of metastasis. Unfortunately, current technologies designed for the isolation and capture of CTCs are inefficient. Existing literature for in vitro CTC cultures report low (6% to 20%) success rates.

To see whether they had indeed cultured CTCs, the group then tested for the presence of epithelial, mesenchymal, and breast tissue markers to establish the cells' tissue of origin using reverse-transcriptase quantitative polymerase chain reaction (qRT-PCR). They selected cytokeratin 5 and 8 and mammaglobin and successfully identified all three biomarkers in all 12 cultures. The team then used RNA-seq on the six samples that yielded sufficient RNA and could be cultured for more than 30 days in order to characterize their gene expression. These six samples all contained CD45+ leukocytes, they noted, which have previously been shown to support CTC survival.

Overall, the investigators identified 7,234 genes that were significantly differentially expressed in the CTCs-containing samples compared to the healthy donors. Increased expression of multiple genes was correlated with a significant drop in overall patient survival, they found. Using multiple bioinformatics tools to confirm that the CTCs in the samples originated from the cancers, the team identified 52 significantly enriched key cancer pathways and 21 enriched genes that are important to breast cancer progression and metastasis. The group mainly found enriched CD8 T cells, neutrophils, and macrophages in the CTC cultures and noted that the isolation technique appeared to favor the survival of macrophages and neutrophils.

Seema Agarwal, PhD, the senior author and associate professor of pathology, said, “We could take DNA and RNA from cultured CTCs and do a detailed genomic analysis that can be done very quickly in a more meaningful way, as prior to expansion, there are very few CTCs in the patient's blood. We don't know whether the cultured cells represent the heterogeneity of the CTCs, but as we move forward, we hope to characterize the heterogeneity of the cells.”

The authors concluded that once profiled, CTCs can provide a significant amount of information based solely on their identity as an intermediary stage of metastasis. Comparison of CTCs with primary tumors would enable the identification of metastatic drivers and lead to the development of metastasis-preventing therapies. Thus, having a standardized method for the capture and culture of CTCs is a pressing need. The study was published on September 28, 2020 in the journal Cancers.