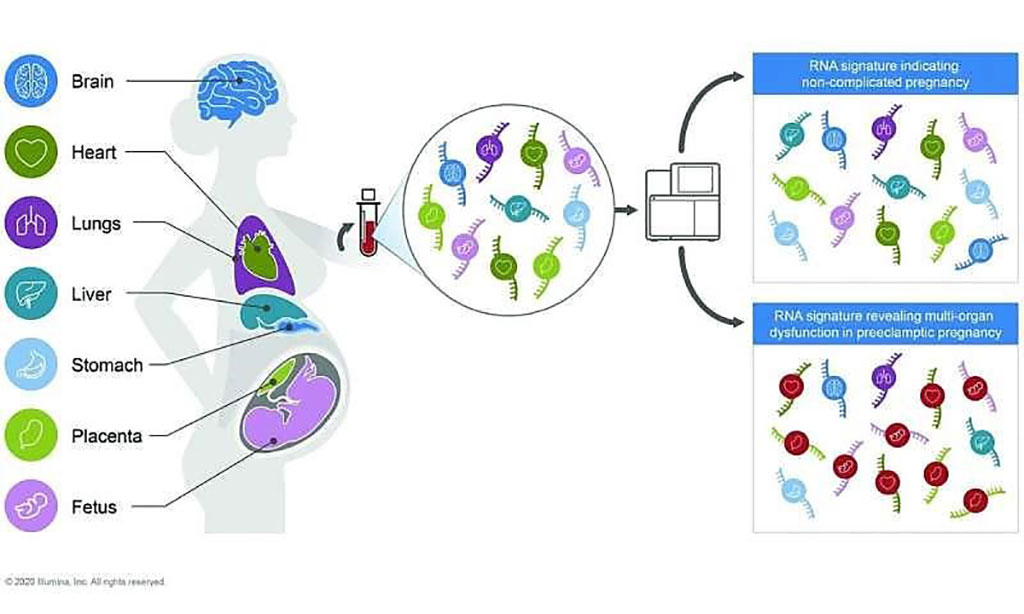 Image: RNA from all bodily organs is present in the blood and can be used to detect pregnancy complications (Photo courtesy of Illumina).
Preeclampsia is a poorly understood pregnancy-associated disorder. Often marked by hypertension, preeclampsia can lead to severe complications including internal bleeding, seizures, stroke, premature birth, and death.

Preeclampsia can develop suddenly, and identifying who is at risk of the condition is difficult. Circulating RNA (C-RNA) is continually released into the bloodstream from tissues throughout the body, offering an opportunity to noninvasively monitor all aspects of pregnancy health from conception to birth.

A team of scientists led by those at Illumina (San Diego, CA, USA) used transcriptome enrichment and sequencing to search for preeclampsia-related RNAs in blood samples collected over time from more than 100 pregnant women with or without early-onset preeclampsia, a condition linked to a rise in maternal and perinatal morbidity and mortality risk. They sequenced the circulating transcriptome from 40 pregnancies at the time of severe, early-onset preeclampsia diagnosis and 73 gestational age–matched controls.

The team brought in machine learning classifier clues, and they acquired a set of 49 circulating RNA transcripts that could pick up early-onset preeclampsia pregnancies with between 85% and 89% accuracy, on average, in another group of two dozen women with or without preeclampsia. The average accuracy of the circulating RNA-based classifier dipped to around 72% for women in the validation cohort experiencing late-onset preeclampsia. Differential expression analysis identified the 30 transcripts with gene ontology annotations and tissue expression patterns consistent with the placental dysfunction, impaired fetal development, and maternal immune and cardiovascular system dysregulation characteristic of preeclampsia.

The authors concluded that they had detected molecular changes specific to the complex pathophysiology of early-onset severe preeclampsia at the time of diagnosis, supporting robust classification across cohorts. They noted that the altered circulating RNA transcripts identified represented contributions from maternal, placental, and fetal tissues, many of which would not be captured in studies focusing on placental tissues collected after delivery. The study was published on July 1, 2020 in the journal Science Translational Medicine.