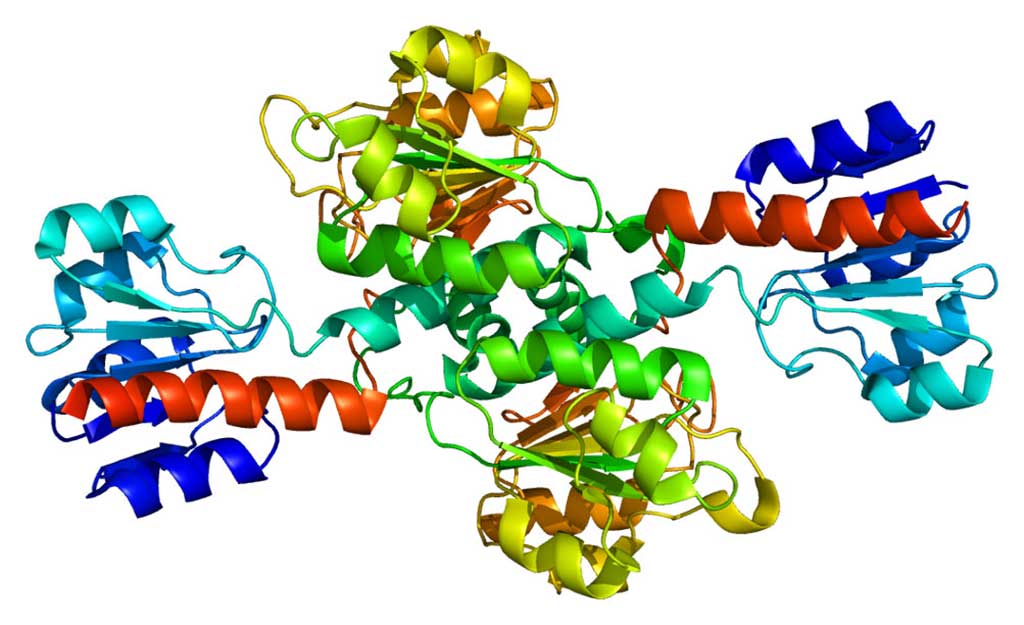 Image: Structure of the phosphoglycerate dehydrogenase (PHGDH) enzyme (Photo courtesy of Wikimedia Commons)
Elevated levels of a circulating RNA biomarker were found to be characteristic for individuals with Alzheimer’s disease (AD) and could be used to predicate whether an asymptomatic person would be likely to develop the disorder.

The extracellular RNAs (exRNAs) present in human biofluids such as blood have recently been systematically characterized. However, the correlations of such biofluid exRNA levels and human diseases remain largely untested.

In this regard, investigators at the University of California, San Diego (USA) exploited the recently developed SILVER-seq (small-input liquid volume extracellular RNA sequencing) technology to generate exRNA profiles from a longitudinal collection of human plasma samples.

The investigators used SILVER-seq technology to analyze 164 plasma samples, which had been collected from 35 research subjects 70 years or older with up to 15 years of clinical follow-up prior to death and whose clinical diagnoses were confirmed by pathological analysis of their post mortem brains. The subject group comprised 15 patients with AD, 11 "converters" (subjects who were initially healthy then later developed AD), and nine healthy controls.

Results revealed that the exRNAs of AD-activated genes and transposons in the brain exhibited a trend of increase in AD plasma in comparison with age-matched control plasma. The gene coding the enzyme phosphoglycerate dehydrogenase (PHGDH) was the only one that exhibited consistent upregulation in AD brain transcriptomes from three independent cohorts and an increase in AD plasma as compared to controls.

The investigators confirmed that PHGDH’s serum exRNA and brain protein expression increased in AD by using five additional published cohorts. In addition, they compared the time-course of exRNA trajectories between “converters” and controls. Plasma PHGDH exRNA exhibited presymptomatic increases in each of the 11 converters during their transitions from normal to cognitive impairment but remained stable over the entire follow-up period in eight out of the nine control subjects. The anomalous individual was subsequently reclassified as a converter.

"Several known changes associated with Alzheimer's disease usually show up around the time of clinical diagnosis, which is a little too late. We had a hunch that there is a molecular predictor that would show up years before, and that is what motivated this study," said senior author Dr. Sheng Zhong, professor of bioengineering at the University of California, San Diego.

"This is a retrospective study based on clinical follow-ups from the past, not a randomized clinical trial on a larger sample size. So we are not yet calling this a verified blood test for Alzheimer's disease," said contributing author Dr. Zixu Zhou, a researcher at the biotechnology company Genemo Inc. (San Diego, CA, USA; https://genemo.com). Nevertheless, our data, which were from clinically collected samples, strongly support the discovery of a biomarker for predicting the development of Alzheimer's disease."

The exRNA study was published in the March 26, 2020, online edition of the journal Current Biology.