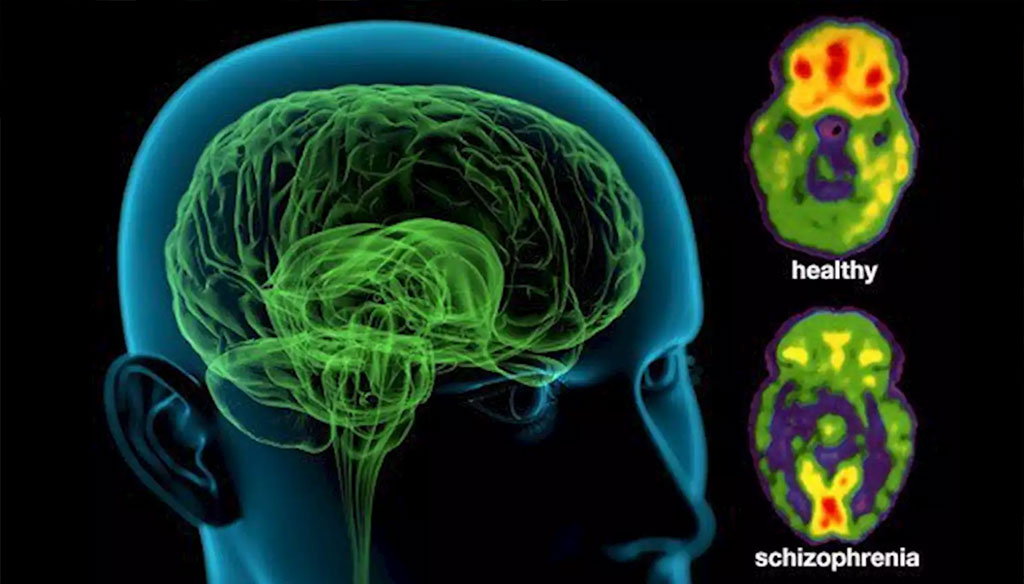 Image: Colored positron emission tomography (PET) scans of axial sections through a healthy brain (upper) and a schizophrenic brain (lower). Genetic architectures of schizophrenia in East Asian and European populations have been compared (Photo courtesy of WebMD)
While the common genetic variants contributing to schizophrenia in East Asian individuals appear to broadly resemble those found in Europeans, polygenic risk scores (PRS) for the condition cannot necessarily be transferred from one population to the next.

Although many common variants and loci have been implicated in schizophrenia, most past studies have focused on individuals of European ancestry. That suggests far more variants are left to be identified but also makes it difficult to know how well the known associations between schizophrenia and variants hold up in other populations.

A team of scientists collaborating with those at Massachusetts General Hospital (Boston, MA, USA) performed a genome-wide association study focused on 22,778 East Asian individuals with schizophrenia and 35,362 without, shoring up findings from the first 13,305 cases and 16,244 controls with additional validation and meta-analysis. Their analyses led to 19 loci with 21 genome-wide significant ties to schizophrenia in East Asians, including 14 associations not identified in a prior schizophrenia study in individuals with Chinese ancestry.

The investigators noted that the risk loci included many parts of the genome where allele frequencies differ in East Asian and European populations, although analyses that incorporated linkage disequilibrium and common variant clues suggested that the genetic architecture of schizophrenia risk is comparable for parts of the genome outside of the immune-related major histocompatibility complex region. The team also saw similar selection signatures, overrepresented gene sets, and other similarities when they compared the East Asian genetic data with results from prior schizophrenia studies in Europeans.

With a meta-analysis on East Asian and European individuals, including 56,418 cases and more than 78,800 controls, the team highlighted 208 schizophrenia associations at 123 known and 53 new loci, narrowing in on apparent causal variants at 44 loci with additional fine-mapping analyses. Even so, PRSs for schizophrenia that were developed in Europeans performed more poorly in the East Asian individuals and vice versa, reduced predictive abilities that the authors suspected might stem from allele frequency, linkage disequilibrium, and other population-related differences.

The authors concluded that their study highlights the importance of including all major ancestral groups in genomic studies, both as a strategy to improve the power to find disease associations and to ensure that the findings have maximum relevance for all populations. The study was published on November 18, 2019 in the journal Nature Genetics.