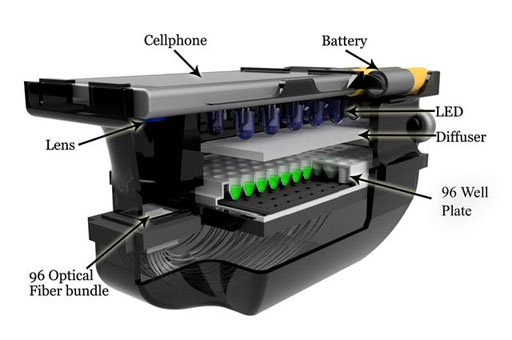 Image: A cutaway showing a smartphone and the diagnostic attachment for antimicrobial susceptibility testing (Photo courtesy of Dr. Aydogan Ozcan, University of California, Los Angeles).
Microbiology researchers have described a modified smartphone that functions as an automated diagnostic test reader for the determination of antimicrobial resistance.

Routine antimicrobial susceptibility testing (AST) can prevent deaths due to bacteria and reduce the spread of multi-drug-resistance, but cannot be regularly performed in resource-limited-settings due to technological challenges, high-costs, and lack of trained professionals.

A team of investigators at the University of California, Los Angeles (USA) has reported the development of a cellphone-based 96-well microtiter-plate (MTP) reader, capable of performing AST without the need for trained diagnosticians.

The proposed system includes a three dimensional-printed smartphone attachment that holds and illuminates the MTP using a light-emitting-diode array. An inexpensive optical fiber-array enables the capture of the transmitted light of each well through the smartphone camera. A custom-designed application sends the captured image to a server to automatically determine well turbidity, with results returned to the smartphone in about one minute.

The investigators tested this mobile-reader on clinical isolates of Klebsiella pneumoniae containing highly resistant antimicrobial profiles using MTPs prepared with 17 antibiotics targeting Gram-negative bacteria. Using 78 patient isolate test-plates, they demonstrated that the mobile-reader met the [U.S.] Food and Drug Administration-defined AST criteria, with a well-turbidity detection accuracy of 98.21%, minimum-inhibitory-concentration accuracy of 95.12%, and a drug-susceptibility interpretation accuracy of 99.23%, with no very major errors.

"This work is extremely important and timely, given that drug-resistant bacteria are increasingly becoming a global threat rendering many of our first-line antibiotics ineffective," said senior author Dr. Aydogan Ozcan, professor of electrical engineering and bioengineering at the University of California, Los Angeles. "Our new smartphone-based technology can help put laboratory-quality testing into much wider adoption, especially in resource-limited regions."

The smartphone AST system was described in the December 15, 2016, online edition of the journal Scientific Reports.