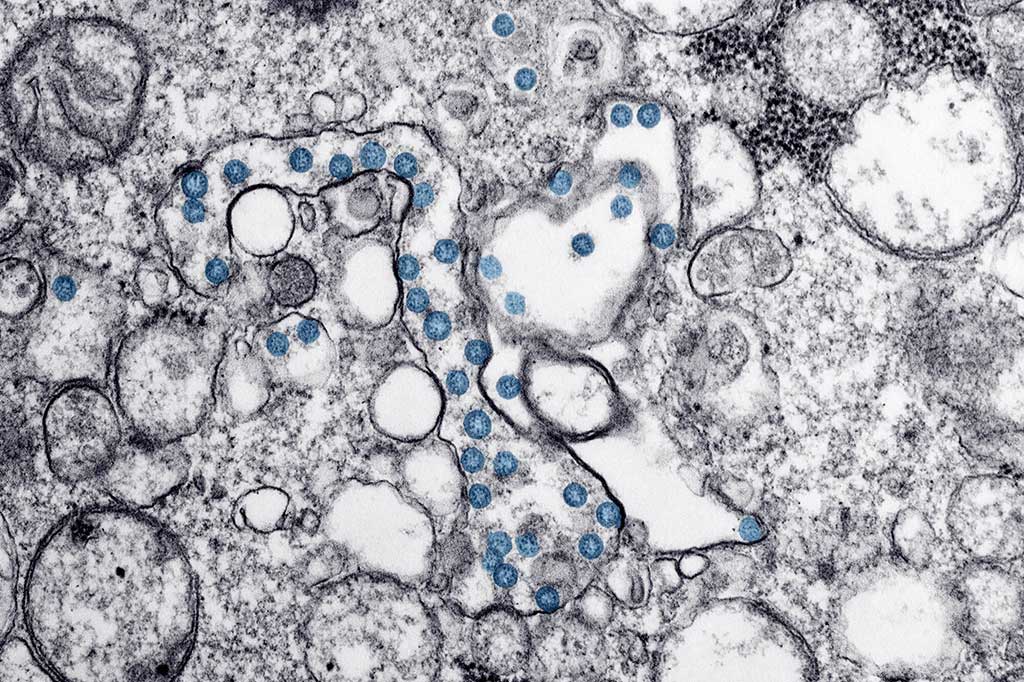 Image: Transmission electron micrograph of an isolate from a case of COVID-19, caused by the coronavirus SARS-CoV-2. The spherical viral particles, colorized blue, contain cross-sections through the viral genome, seen as black dots (Photo courtesy of Hannah A Bullock and Azaibi Tamin).
The rapid identification of the etiology and the sharing of the genetic sequence of the virus, followed by international collaborative efforts initiated due to the emergence of SARS-CoV-2 have led to the rapid availability of real-time PCR diagnostic assays that support the case ascertainment and tracking of the outbreak.

Validated serologic assays are crucial for patient contact tracing, identifying the viral reservoir hosts and for epidemiological studies. Epidemiological studies are urgently needed to help uncover the burden of disease, in particular, the rate of asymptomatic infections, and to get better estimates on morbidity and mortality.

An international team of scientists working with the Erasmus Medical Center (Rotterdam, the Netherlands) developed serological assays for the detection of SARS-CoV-2 neutralizing, spike- and nucleocapsid-specific antibodies. They used serum samples from patients with polymerase chain reaction (PCR)-confirmed infections of SARS-CoV-2, other coronaviruses, or other respiratory pathogenic infections, and they validated and tested various antigens in different in-house and commercial enzyme-linked immunosorbent assays (ELISAs).

The scientists demonstrated that most PCR-confirmed SARS-CoV-2 infected individuals seroconverted, as revealed by sensitive and specific in-house ELISAs. They found that commercial S1 IgG or IgA ELISAs were of lower specificity while sensitivity varied between the two, with IgA showing higher sensitivity. They compared the performance of the different ELISAs for the detection of antibodies among PCR-confirmed COVID-19 patients to that of plaque reduction neutralization assay (PRNT), as the gold standard for CoV serology. PRNT50 correlated strongly with the different ELISAs, with the commercial IgA showing the strongest correlation followed by the S and N ELISAs indicating their capacity to detect SARS-CoV-2 specific antibodies.

The authors concluded that overall, the validated assays described here can be instrumental for the detection of SARS-CoV-2-specific antibodies for diagnostic, seroepidemiological and vaccine evaluation studies. The study was published on March 20, 2020 in the pre-publications journal medRxiv.