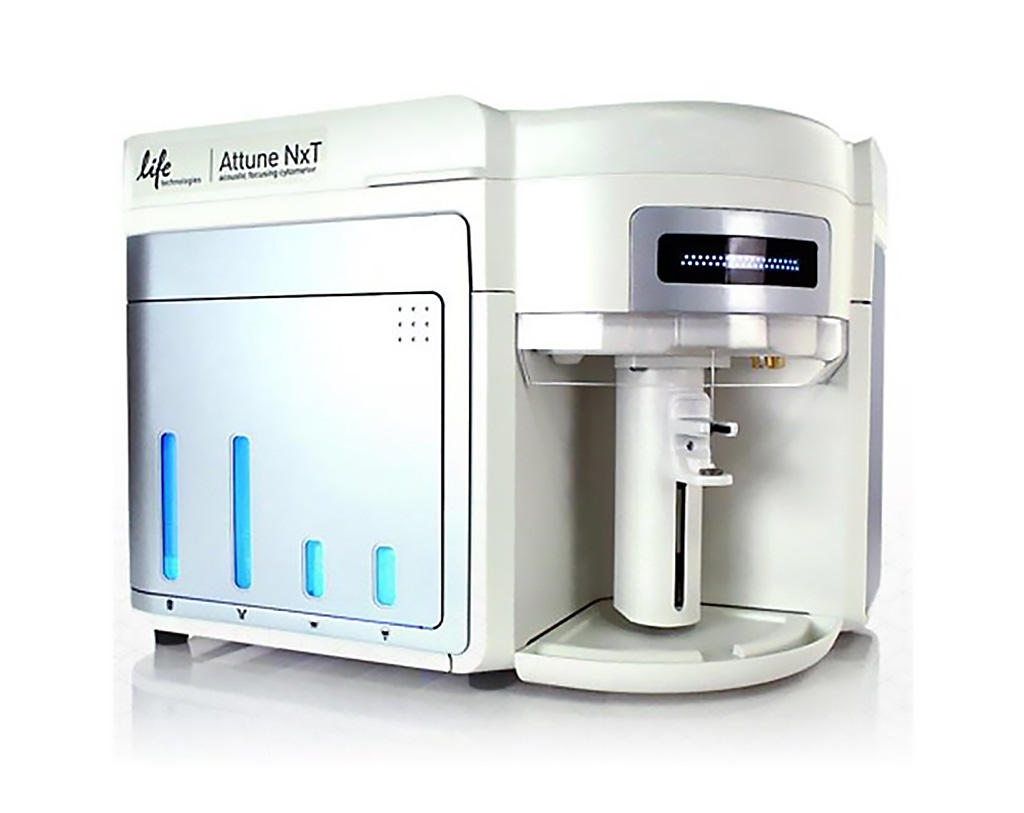 Image: The Attune NxT Acoustic Focusing Cytometer is ideal for immunophenotyping and signaling studies, cell cycle analysis, detection of rare events, stem cell analysis, cancer and apoptosis studies, microbiological assays, and more (Photo courtesy of Thermo Fisher Scientific)
Acute myeloid leukemia (AML) is the most common type of leukemia in adults. It is characterized by the pathological expansion of immature cells (myeloblasts) that invade the bone marrow and expand into the blood, affecting the production of the rest of the healthy cells.

Although AML patients usually respond well to chemotherapy-based treatments, large proportion of them eventually relapse or show resistance to these procedures. The cause of relapse or resistance to treatment is sometimes due to the existence of leukemic stem cells capable of starting cancer again, and in turn, for being resistant to chemotherapy. However, identifying them is a challenge since there are no specific markers to detect and isolate them.

Scientists at the Josep Carreras Leukaemia Research Institute (Badalona, Spain) and their colleagues carried out a prospective hospital-based cohort study that included 43 newly diagnosed patients with acute myeloid leukemia. There were 30 males, and 13 females; with a median age of 63 years, (range 26–91) in the study cohort. A total of 12 out of 43 patients underwent allogeneic stem cell transplant (ASCT) following chemotherapy.

The team used flow cytometric cellular alkaline phosphatase (ALP) activity within primitive leukemic cells which allowed them to identify two groups of patients at diagnosis according to the numbers of leukemic blasts expressing ≥ 12% of ALP+ cells (27 patients, Group A) and less than 12% of ALP+ cells (16 patients, Group B). All 38 EDTA-anticoagulated bone marrow and five blood samples were prepared using a modified previously developed method aimed at avoiding the lysis of erythrocytes during sample preparation, which can result in unwanted damage to leukocytes, and conceivably to leukemic cells.

The authors concluded that flow cytometric cellular ALP activity at diagnosis may be used to estimate relapses and disease persistence more accurately. The limitations of the study include the small number of patients enrolled and a short follow-up, due to its prospective nature. The study was published on December 10, 2019 in the journal Oncotarget.