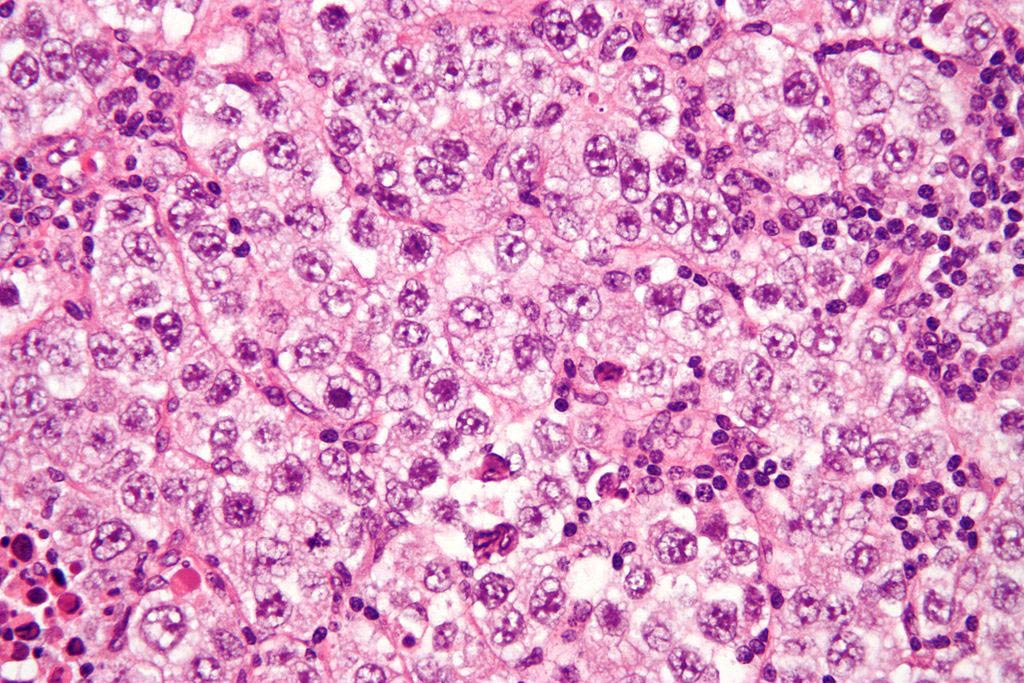 Image: A micrograph of a seminoma, a common germ cell tumor. Tumor cells show a fried egg-like appearance (Photo courtesy of Wikimedia Commons).
Cancer researchers have identified several distinct genomic features underlying the origin of germ cell tumors and that are associated with the chemosensitivity of this type of cancer, as well as changes that occur during the rare progression to chemoresistance.

Germ cell tumors (GCTs) are derived from germ cells and occur most frequently in the testes. GCTs are histologically heterogeneous and are usually curable with chemotherapy, even after metastasis. Gains of chromosome arm 12p and aneuploidy are nearly universal in GCTs but specific somatic genomic features driving tumor initiation, chemosensitivity, and progression have not been completely characterized.

They reported in the December 1, 2016, issue of the journal Nature that the primary somatic feature of GCTs was the highly recurrent chromosome arm level amplifications and reciprocal deletions (reciprocal loss of heterozygosity) - variations that were significantly enriched in GCTs compared to 19 other cancer types. These tumors also acquired KRAS mutations during the development from precursor to primary disease, and primary testicular GCTs (TGCTs) expressed uniformly wild type and fully functional p53 tumor suppressor genes.

Detailed examination of samples from germ cell tumors that had developed drug resistance revealed that as the cancers progressed, they showed further increases in chromosomal abnormalities seen in all the tumors.

"The gain and loss of DNA copies shows that the tumors' chromosomes are profoundly deranged," said senior author Dr. Eliezer Van Allen, assistant professor of medicine at the Dana-Farber Cancer Institute, "and represents a hallmark feature we had not noticed before. This abnormality may be linked to the development of germ cell tumors and cause them to be sensitive to chemotherapy, but exactly how it does so remains to be discovered."