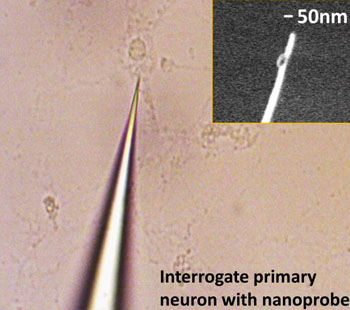 Plasmonic resonance is a phenomenon that occurs when light is reflected off thin metal films, which may be used to measure interaction of biomolecules on the surface. An electron charge density wave arises at the surface of the film when light is reflected at the film under specific conditions. A fraction of the light energy incident at a defined angle can interact with the delocalized electrons in the metal film (plasmon) thus reducing the reflected light intensity. The angle of incidence at which this occurs is influenced by the refractive index close to the backside of the metal film, to which target molecules are immobilized. If ligands in a mobile phase running along a flow cell bind to the surface molecules, the local refractive index changes in proportion to the mass being immobilized. This can be monitored in real time by detecting changes in the intensity of the reflected light. In the current study a 50-nanometer diameter gold nanorod acted as the plasmon resonance biosensor.

The investigators reported results obtained by using the nFTP in the June 6, 2016, online edition of the journal Nano Letters. They found that A-beta42 generation, under clinically relevant anesthetic treatment, preceded tau phosphorylation, which then facilitated further A-beta42 generation. This observation was supported by measuring proteins in cell lysates using the ultrasensitive label-free photonic crystal nanosensors. Thus, the nFTP technique proved to be an advanced method for investigating protein expression and post-translational modification in live cells and for determining outcomes of intervention of Alzheimer’s disease and other neurodegenerative disorders.

"We have brought the traditional immunoassay into living cells with exquisite sensitivity," said senior author Dr. Qimin Quan, a junior fellow at the Rowland Institute of the Harvard University Medical School. "The device is still limited in its ability to measure a large number of single cells, requiring further improvement. But its high-sensitivity, label-free and single-cell capability make it a unique tool for diagnosing clinically obtained limited samples."