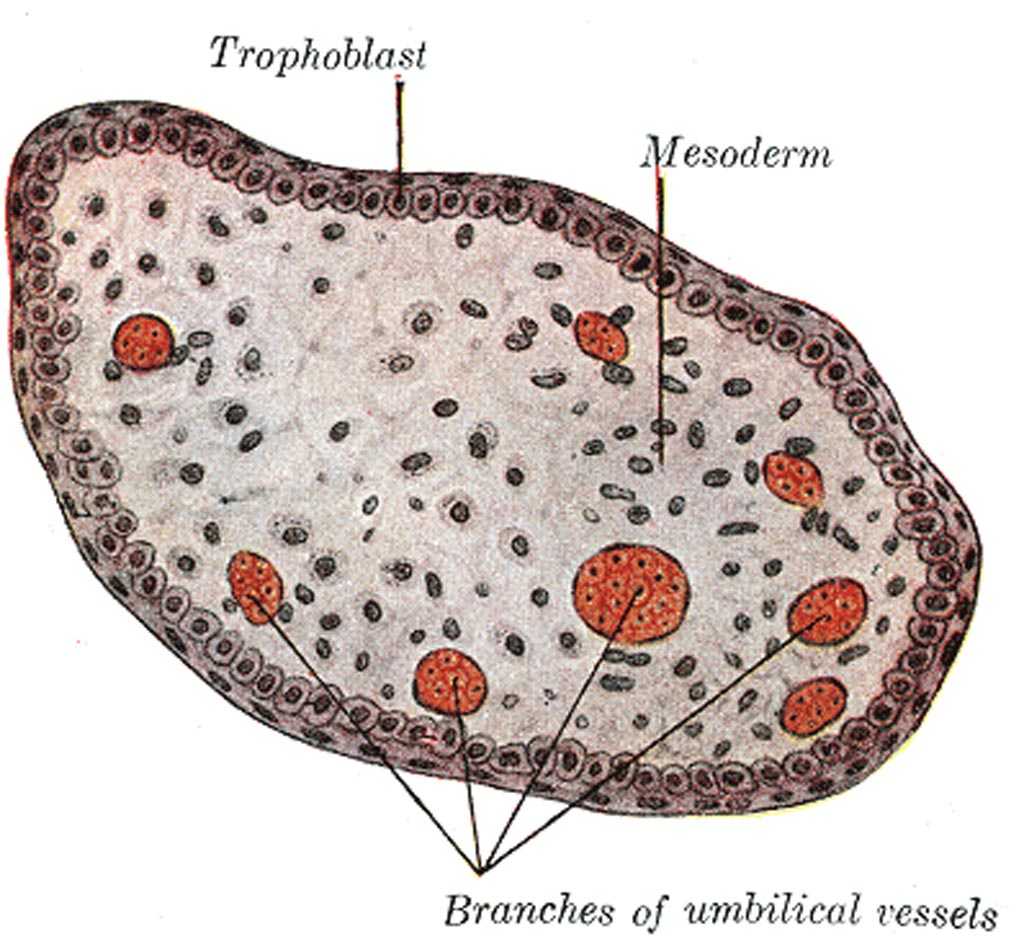 Image: The transverse section of a chorionic villus (Photo courtesy of Wikimedia Commons).
A recent paper described a technique to increase the proportion of placental trophoblast cells in cervical samples by 700%, which enables individual trophoblasts to be picked out for genetic testing.

Currently, diagnosis of genetic disorders in developing fetuses requires capture of trophoblasts through amniocentesis or chorionic villus sampling, both invasive procedures. Extravillous trophoblasts (EVTs) have the potential to provide the entire fetal genome for prenatal testing. Previous studies have demonstrated the presence of EVTs in the cervical canal and the ability to retrieve a small quantity of these cells by cervical sampling. However, these small quantities of trophoblasts are greatly outnumbered by the population of cervical cells in the sample, making isolation of the trophoblasts difficult.

Investigators at Brown University (Providence, RI, USA) took advantage of differences in morphology between trophoblasts and other cervical cells (trophoblasts are smaller, differ in shape, and have relatively large nuclei) to develop a method to enrich the trophoblast population in a cervical sample through differential settling of the cells in polystyrene wells.

Initially the investigators added small quantities of JEG-3 trophoblast cell line cells into clinical samples from standard Pap tests taken at five to 20 weeks of gestation to determine the optimal workflow. They observed that a four-minute incubation period in the capture wells led to a maximum in JEG-3 cell settling onto the plastic surface with the removal of more than 90% of the cervical cell population, leading to a 700% enrichment in JEG-3 cells.

The investigators then went on to conduct a proof-of-concept study on an imaging and picking platform to demonstrate the ability to pick single trophoblast cells for whole genome amplification. Results showed that the new technique was quick, inexpensive, minimized cell loss, and yielded retrieval of individual trophoblast cells.

The trophoblast enrichment technique was described in the August 20, 2019, online edition of the journal Scientific Reports.