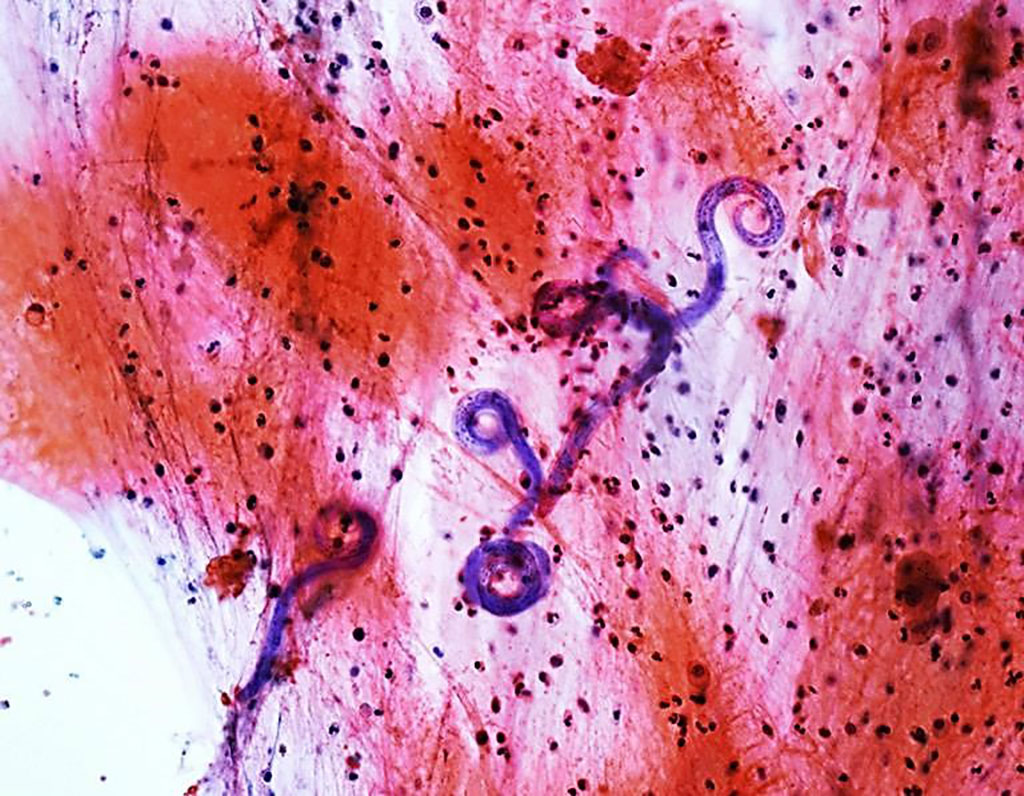 Image: Microscopic examination of bronchoalveolar lavage fluid revealing the presence of Strongyloides stercoralis larvae in hemorrhagic background (Photo courtesy Kyung-Nyeo Jeon, MD, PhD).
Strongyloides stercoralis is a soil-transmitted human pathogenic parasitic roundworm causing the disease strongyloidiasis. It is found in tropical and subtropical regions worldwide. Many people infected are asymptomatic at first. Symptoms include dermatitis: swelling, itching, larva currens, and mild hemorrhage at the site where the skin has been penetrated.

Infectious disease specialists at the Universidade Federal de São Paulo (São Paulo, Brazil) and their colleagues carried out a retrospective, multicenter, case–control study in which they assessed the risk factors for and clinical outcomes of severe S. stercoralis infections in kidney transplant recipients in Brazil. They included 138 kidney transplant recipients: 46 cases and 92 controls.

Cases were included on the basis of the following criteria: being a kidney or kidney–pancreas transplant recipient; being ≥ 18 years of age; and having been diagnosed with severe S. stercoralis infection, characterized by severe symptoms attributed exclusively to the S. stercoralis life cycle (intense respiratory, gastrointestinal, or other symptoms), together with the isolation of S. stercoralis in sputum, tracheal aspirates, bronchoalveolar lavage fluid, duodenal aspirate, stool samples, pulmonary biopsy samples, or gastrointestinal biopsy samples.

The scientists reported that during the study period, 15,860 transplants were performed and a total of 53 patients were diagnosed with S. stercoralis infection. Of those 53 patients, 46 (45 recipients of a kidney transplant and one recipient of a kidney–pancreas transplant) met the criteria for severe S. stercoralis infection (an incidence of 0.29%) and were matched to 92 control patients. Among the cases, the median number of days from transplantation to diagnosis was 117 (interquartile range [IQR], 73.5–965) and the most common clinical findings were gastrointestinal symptoms (in 78.3%) and respiratory symptoms (in 39.1%), whereas fever and eosinophilia were seen in only 32.6% and 43.5%, respectively. The 30-day all-cause mortality among the cases was 28.3% overall and was significantly higher among the cases of infection occurring within the first three months after transplantation (47% versus 17.2%).

The authors concluded that severe S. stercoralis infections are associated with considerable morbidity and mortality after kidney transplantation. In endemic areas, such infection may occur late after transplantation, although it seems to be more severe when it occurs earlier after transplantation. Specific risk factors and clinical manifestations can identify patients at risk, who should receive prophylaxis or early treatment. The study was published on January 31, 2020 in the journal PLOS Neglected Tropical Diseases.