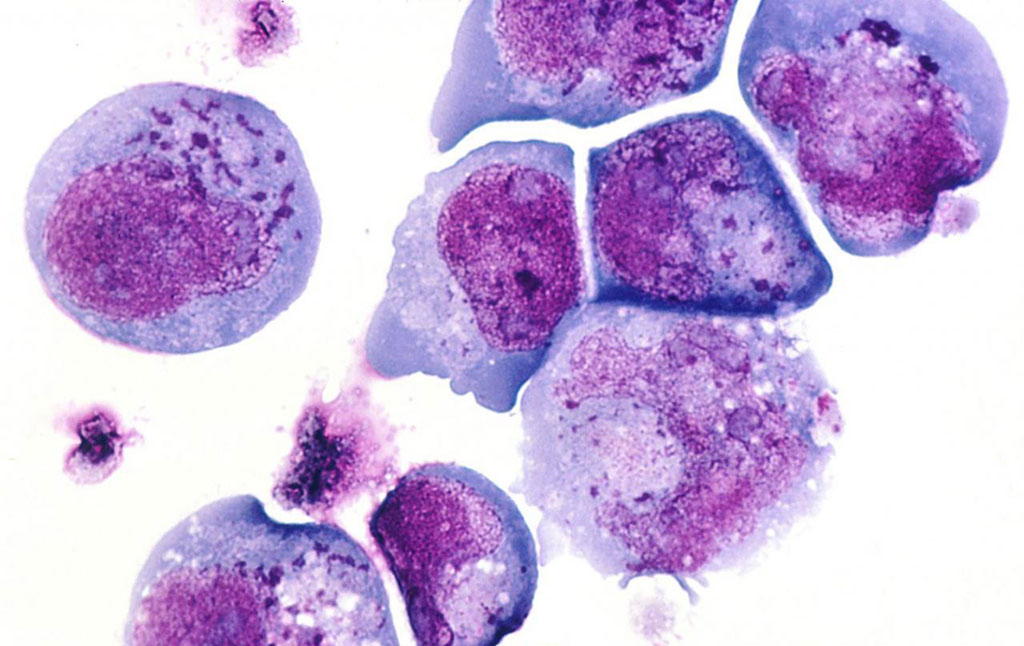 Image: Histological slide of the human herpes virus-6 showing infected cells, with inclusion bodies in both the nucleus and the cytoplasm. A new method has been developed to separate between two different types of a common herpes virus, and HHV-6 has been linked to multiple sclerosis (Photo courtesy of National Cancer Institute)
Multiple sclerosis, MS, is an autoimmune disease that affects the central nervous system. The cause of the disease is unclear, but one plausible explanation is a virus deceives the immune system to attack the body's own tissue.

According to estimates, as many as 80% of all children are infected with the common herpes virus HHV-6 before two years of age, and many also carry protection in the form of antibodies against this particular virus for the rest of their lives. But since it hasn't been possible to tell the two variants of HHV apart post-infection, it has been difficult to say whether HHV-6A or B is a risk factor for MS.

Clinical scientists from the Karolinska Institutet (Stockholm, Sweden) compared antibody levels in blood samples of some 8,700 MS-patients against more than 7,200 healthy people whose gender, date of birth, date of blood sample and other factors matched those with MS. For detection of IgG antibodies against the different viral proteins, a multiplex serological assay using beads coated with recombinant glutathione s-transferase (GST) fusions proteins was used. Median fluorescence intensity (MFI) was measured with a Luminex 200 analyzer (Luminex Corporation, Austin, TX, USA). Antibodies toward Epstein-Barr virus (EBV), another herpes virus that is also associated with MS, were analyzed with the same method.

The team were able to distinguish between the A and B virus by analyzing antibodies in the blood against the proteins, immediate early protein 1A and 1B (IE1A and IE1B), that diverge the most between the two viruses. The scientists reported that people with MS had a 55% higher risk of carrying antibodies against the HHV-6A protein than the control group. In a sub-group of almost 500 people, whose blood samples were drawn before the onset of the disease, the risk of developing MS in the future was more than doubled if they had a HHV-6A viral infection. The younger the people were when the virus was first discovered in the blood, the higher the risk was of developing MS in the future. HHV-6B, on the other hand, was not positively associated with MS. Instead MS-patients had lower levels of antibodies toward IE1B than those without MS.

Anna Fogdell-Hahn, PhD, an associate professor of Clinical Neuroscience and senior author of the study, said, “This is a big breakthrough for both the MS and herpes virus studies. For one, it supports the theory that HHV-6A could be a contributing factor to the development of MS. On top of that, we are now able, with this new method, to find out how common these two different types of HHV-6 are, something we haven't been able to do previously.”

The authors concluded that they had provided strong serological data supporting a role for HHV-6A in MS etiology, though causality, as with all forms of association studies remains to be proven. The study was published on November 26, 2019 in the journal Frontiers in Immunology.