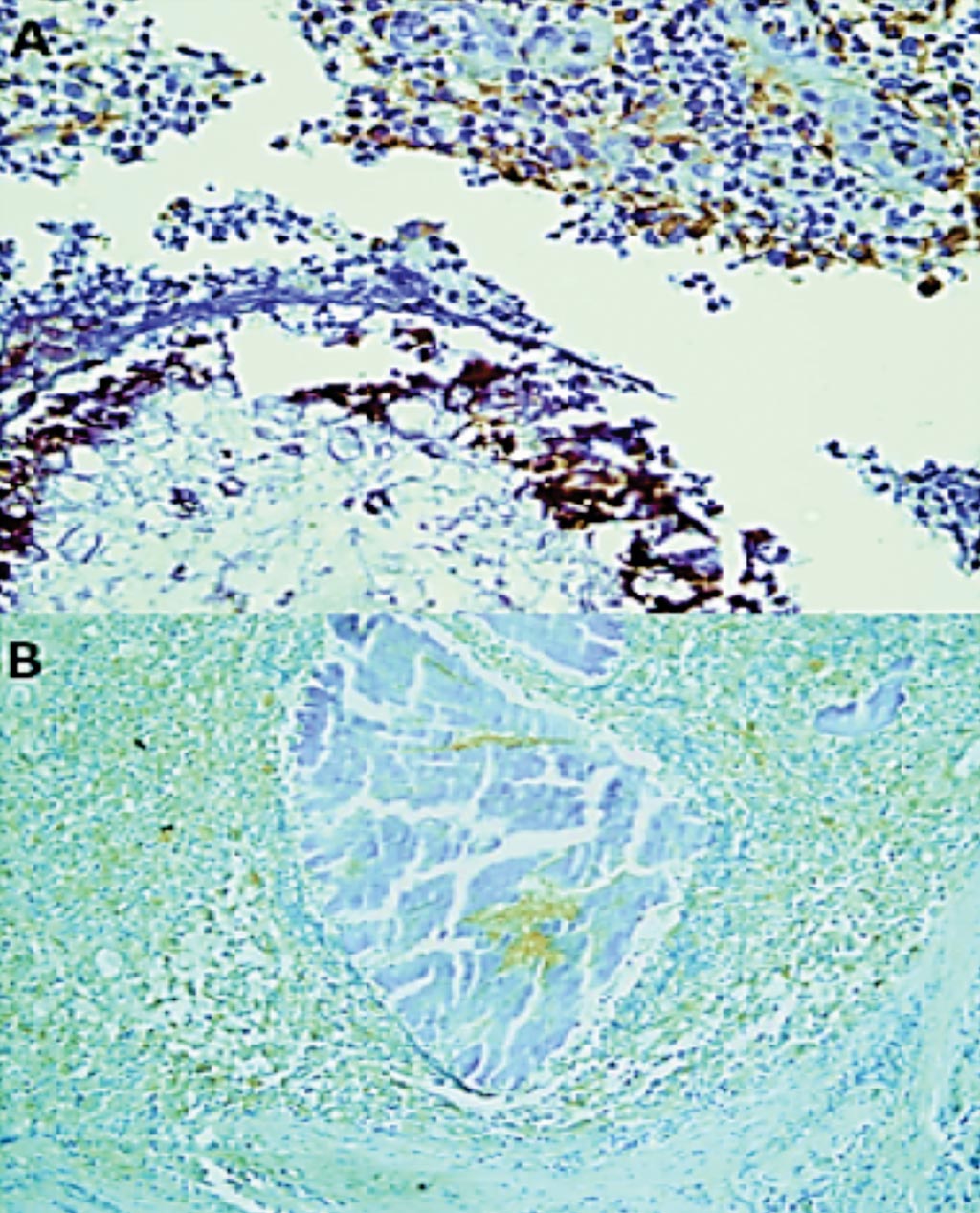 Image: An immunohistochemical staining IL-17A expression in (A) M. mycetomatis, and (B) S. somaliensis. IL-17A staining was seen as a brown cytoplasmic staining in cells (Photo courtesy of University of Khartoum).
Mycetoma is a persistent, progressive granulomatous inflammatory disease caused either by fungi or by bacteria. Characteristic of this disease is that the causative agents organize themselves in macroscopic structures called grains. These grains are surrounded by a massive inflammatory reaction.

Mycetoma is caused by any of 56 different microorganisms and is endemic to many tropical and subtropical areas. It usually affects young adults and children and is most common in farmers and other workers who deal directly with soil. Mycetoma appears as a slow-growing tumor-like mass that gradually increases in size.

A team of international scientists working with the University of Khartoum (Khartoum, Sudan) studied surgical biopsies from 100 patients with confirmed mycetoma. Surgical biopsies from these patients were fixed in 10% formalin for 24 hours, and paraffin blocks were prepared and all sections were stained with haematoxylin and eosin (H&E). Collagen fibers were detected in tissue sections by staining them in Weigert’s iron hematoxylin working solution for 10 minutes. Immunohistochemical staining was used to determine the matrix metalloprotease-9 (MMP-9) and Interleukin-17 (IL-17) expression around the grains of different mycetoma causatives agents. In Sudan, the most commonly encountered micro-organisms are the fungus Madurella mycetomatis and the bacteria Streptomyces somaliensis, Actinomadura madurae and Actinomadura pelletierii.

The scientists reported that while IL-17 was mostly found in Zones I and II of the grains, MMP-9 was present primarily in the more outer Zones II and III. Levels of the two immune molecules corresponded with each other, and were associated with the disease duration and lesion size. Moreover, levels of MMP-9 also varied by the causative agent of mycetoma and MMP-9 expression was detected as brown cytoplasmic stain within the cells. IL-17A expression was noticed within the cytoplasm of neutrophils, macrophages and lymphocyte cells. MMP-9 was more highly expressed in A. pelletierii and S. somaliensis biopsies compared to M. mycetomatis biopsies.

The authors concluded that their results obtained in the present study demonstrated that IL-17A and MMP-9 were expressed in the granuloma of different mycetoma causative agents and that the expression of IL-17A was more extensively in larger lesions and lesions with a longer disease duration. They also demonstrated a positive correlation between IL-17A expression levels and MMP-9 expression levels. The study was published on July 11, 2019, in the journal PLOS Neglected Tropical Diseases.