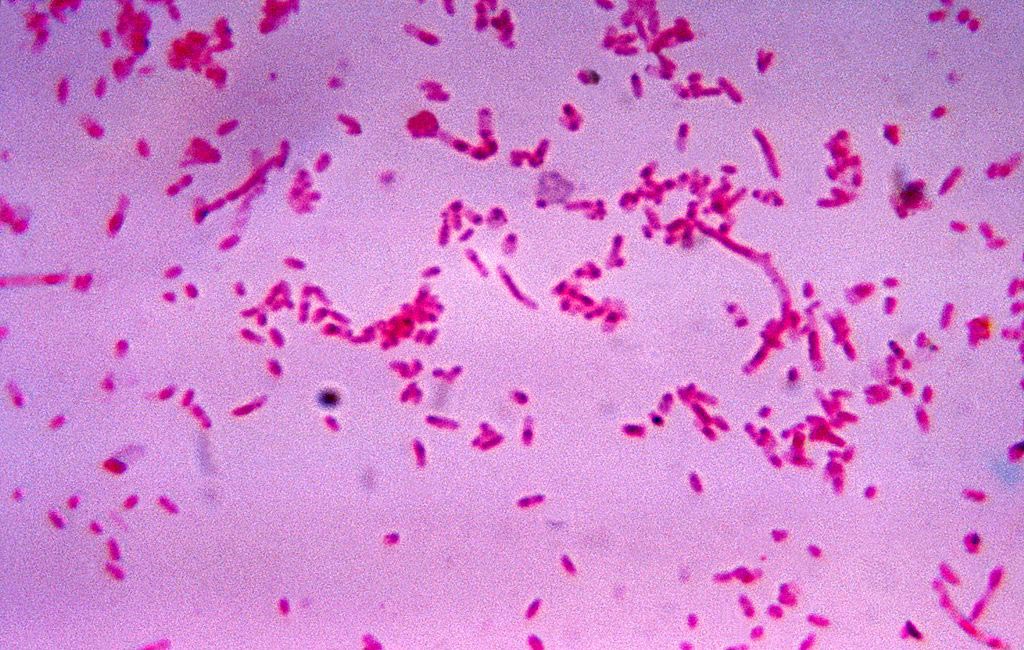 Image: Fusobacterium novum in liquid culture. Fusobacterium flourishes in colon cancer cells, and is often also associated with ulcerative colitis (Photo courtesy of the CDC).
The mix of bacteria comprising the human gut microbiome is linked to the development of specific diseases and syndromes including inflammatory bowel disease, primary sclerosing cholangitis, and chronic depression.

Inflammatory bowel disease (IBD) includes several conditions characterized by chronic inflammation of the intestinal tract. Among these conditions are ulcerative colitis and Crohn's disease. Primary sclerosing cholangitis (PSC) is a long-term progressive disease of the liver and gallbladder characterized by inflammation and scarring of the bile ducts, which normally allow bile to drain from the gallbladder. Affected individuals may have no symptoms or may experience signs and symptoms of liver disease such as yellow discoloration of the skin and eyes, itching, and abdominal pain.

Previous work by investigators at The Flanders Institute for Biotechnology (Leuven, Belgium) had characterized the populations of normal, health-associated gut microbiota. In the current study, they searched for population mixes that could be linked to specific diseases or syndromes.

For this study, the investigators revisited a disease association microbiome data set comprising 106 patients with PSC and/or IBD. They reported an increased prevalence of a low cell count Bacteroides 2 enterotype (B2 enterotype) across the pathologies studied, with microbial loads correlating inversely with intestinal and systemic inflammation markers. Quantitative analyses enabled them to differentiate between taxa associated with either intestinal inflammation severity (Fusobacterium) or cholangitis/biliary obstruction (Enterococcus) among previously suggested PSC marker genera. They identified and validated a near-exclusion pattern between the inflammation-associated Fusobacterium and Veillonella genera, with Fusobacterium detection being restricted to Crohn’s disease and patients with PSC–Crohn’s disease.

Senior author Dr. Jeroen Raes, professor of microbiology and immunology at The Flanders Institute for Biotechnology, said, "Over the years, many research groups worldwide have attempted to describe microbiota alterations associated with diseases. Especially IBD is a hot topic in microbiome research. Our study differs from these previous attempts on three fronts. First, we compared the microbiota of patients with profiles from healthy volunteers from our Flemish Gut Flora Project catalog of over 3,000 microbiomes. Second, in our analyses, we did not only look at the percentages of different bacteria present in the stool samples, but also used a new technique to quantify their abundances. Third, we corrected our results for factors such as loose stools, often symptomatic in the diseases studied, but affecting the outcome of microbiome analyses."

"There appears to be a large overlap in microbiome alterations observed across different patient groups," said Dr. Raes. "We detected the B2 enterotype in around 26% of depressed individuals. While the gut microbiota has been shown to play a role in disease development in, for example, ulcerative colitis and Crohn's disease, this is far less clear for depression. However, we will explore the association between the B2 enterotype and depression in more detail in future studies.

The study was published in the June 17, 2019, online edition of the journal Nature Microbiology.

The Flanders Institute for Biotechnology