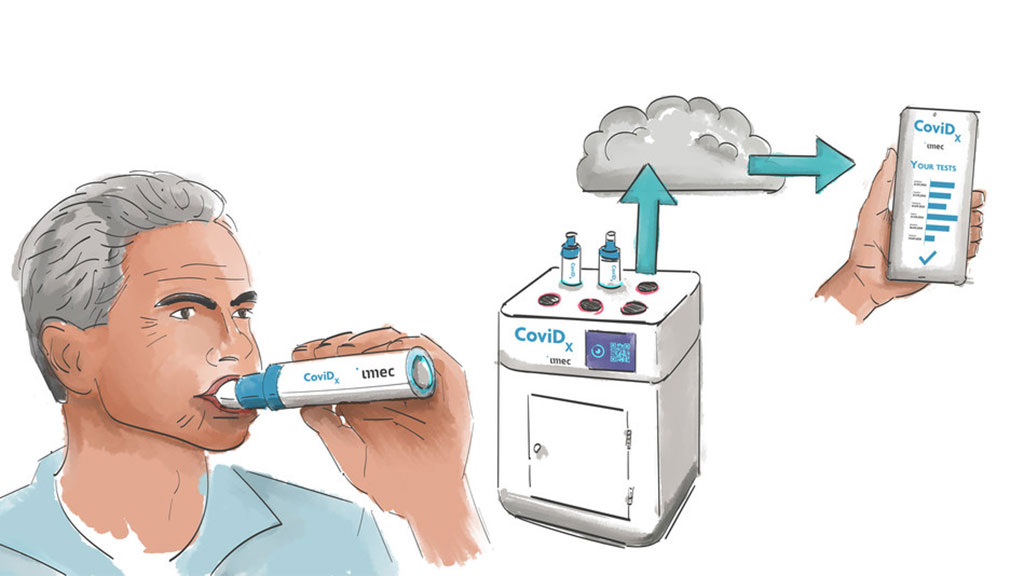 Image: New Groundbreaking COVID-19 Test to Identify SARS-CoV-2 Virus Particles in Exhaled Breath Within Five Minutes (Photo courtesy of Imec)
Researchers are developing a SARS-CoV-2 test to identify positive cases and confirm whether someone is contagious in less than five minutes using a groundbreaking approach that will use virus particles in exhaled breath.

Imec (Leuven, Belgium) has begun developing the groundbreaking SARS-CoV-2 test that will identify the virus particles in a person's exhaled breath, unlike the current approaches (using blood, saliva, or a nasopharyngeal swab). The solution promises accurate identification of a contagious case in less than five minutes, enabling faster, easier, more comfortable, and larger-scale testing. Imec's solution consists of a sample collector and an analysis unit, both of which are being custom developed by Imec researchers. Researchers are focusing much of their attention on the sample collector, which will act as the aerosol (and virus particle) collector and support the solution's high-speed real-time quantitative (RT-q) PCR functionality.

“Merging these tasks using conventional technologies would be extremely hard to do. But thanks to our innovation capability when it comes to using silicon, we have developed a chip that effectively does both,” said Peter Peumans, CTO of Health Technologies at Imec. “Its silicon microscale PCR cavities make for thousands of impactors that allows us to capture the viral particles, while its powerful RT-qPCR functionality brings down the duration of the PCR effort from 50 to 5 minutes. Importantly as well, the standard silicon technology used to build this chip facilitates mass production at a low cost.”

"Provided positive results in our clinical studies, our tool will make testing for SARS-CoV-2 easier, faster, more comfortable, and possible on a much larger scale. Moreover, we are designing our test to flexibly cope with the rise of other viruses and germs that spread via exhaled particles – such as influenza, RSV, and tuberculosis," added Peumans.

“It is now clear that the virus is transmitted pre-symptomatically via exhaled particles,” said Peter Piot, microbiologist and member of the European Commission advisory panel on COVID-19. “SARS-CoV-2 testing via breath sample coupled with an ultrafast molecular analysis would be game-changing since it would allow for the timely detection of individuals who are most likely to transmit the virus. Because a breath sample is much less invasive compared to swabs or saliva, it would also allow for more frequent testing and a faster return to normal.”