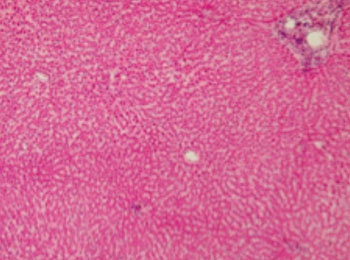 Image: Cross-section of the human liver (Photo courtesy of Wikimedia Commons).
Researchers have identified a stem cell line that is responsible for the generation of liver cells (hepatocytes), which are constantly required to maintain the health of the organ.

Working with mice, investigators at Stanford University (Palo Alto, CA, USA) traced the lineage of hepatocytes by determining expression of the Wnt-responsive gene Axin2 (axis inhibition protein 2). The WNT gene family consists of structurally related genes that encode secreted signaling proteins. These proteins have been implicated in oncogenesis and in several developmental processes, including regulation of cell fate and patterning during embryogenesis.

The investigators reported in the August 5, 2015, online edition of the journal Nature that they had identified a population of proliferating and self-renewing cells adjacent to the central vein in the liver lobule. These pericentral cells expressed the early liver progenitor marker Tbx3 (T-box 3), were diploid, and thereby differed from mature hepatocytes, which are mostly polyploid. The descendants of pericentral cells differentiated into Tbx3-negative, polyploid hepatocytes, and could replace all hepatocytes along the liver lobule during homeostatic renewal. The population of liver stem cells was maintained by Wnt signals provided by endothelial cells in the adjacent central vein.

"We have solved a very old problem," said senior author Dr. Roel Nusse, professor of developmental biology at Stanford University. "We have shown that like other tissues that need to replace lost cells, the liver has stem cells that both proliferate and give rise to mature cells, even in the absence of injury or disease. Differentiated hepatocytes have amplified their chromosomes. That is, the cells have more than the usual two copies of every chromosome. This enables the cells to make more proteins, but it really compromises their ability to divide."

A new study has identified which blood tests are best at detecting Alzheimer’s disease during the earliest stages, and also another blood test that is optimal for detecting relevant treatment effects.... Read more

Pancreatic cancer initially produces only diffuse symptoms and is therefore often detected so late that it is difficult to treat successfully. As a result, the mortality rate for this form of cancer is very high.... Read more

Myocarditis is a difficult condition to diagnose. Symptoms include a temperature, fatigue, chest pain and shortness of breath, which can all be easily mistaken for other conditions. The gold standard method... Read more

One in nine women in the developed world will be diagnosed with breast cancer at some point in her life. The prevalence of breast cancer is increasing, an effect caused in part by the modern lifestyle... Read more

The diagnosis of prostate cancer using a non-invasive method and with greater accuracy than traditional diagnostic procedures is ever closer to becoming a reality. This has been confirmed by the data in... Read more