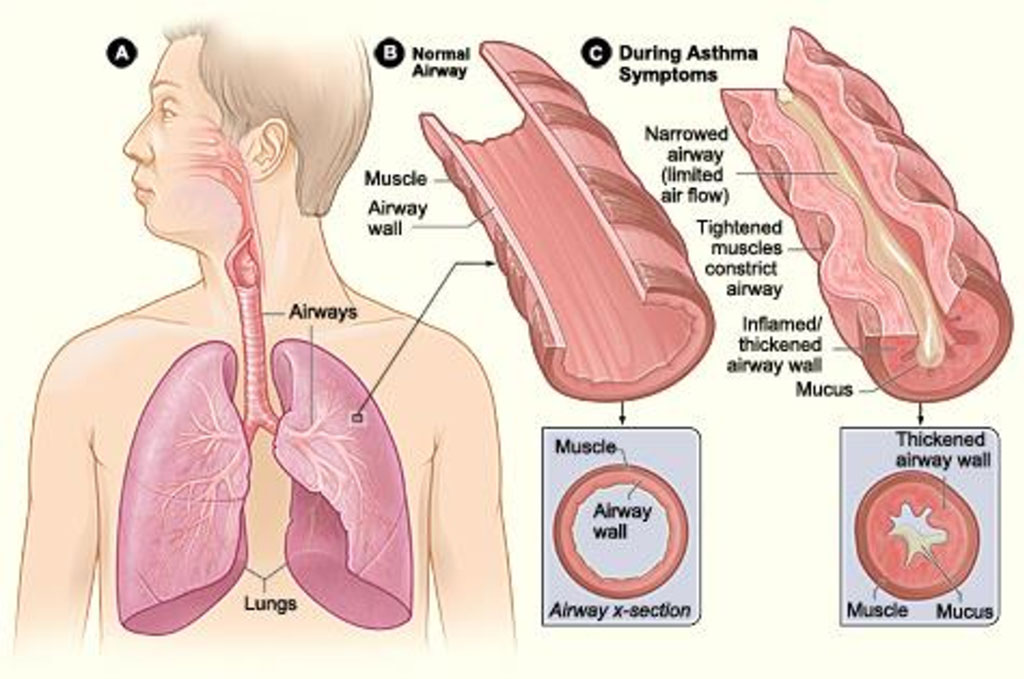 Image: Figure A shows the location of the lungs and airways in the body. Figure B shows a cross-section of a normal airway. Figure C shows a cross-section of an airway during asthma symptoms (Photo courtesy of [U.S.] National Institute of Health: National Heart, Lung, Blood Institute)
A genetic variant has been identified that causes depressed lung function among asthma patients and reduces their response to glucocorticoid treatment.

Asthma is a chronic lung disease that inflames and narrows the airways. Asthma causes recurring periods of wheezing, chest tightness, shortness of breath, and coughing. The coughing often occurs at night or early in the morning. Asthma affects people of all ages, but it most often starts during childhood. Childhood-onset and adult-onset asthma differ with respect to severity and associated syndromes.

Although resistance to glucocorticoids is a major clinical problem, the underlying mechanisms are unknown. In population studies, animal models, and cell culture experiments, androgens were associated with several benefits in asthma, but neither androgen use in glucocorticoid-resistant asthma nor the genetic determinants of androgen responsiveness have been studied in humans. In this regard, investigators at the Cleveland Clinic (OH, USA) analyzed the association between genomes and lung function in more than 500 asthmatic patients who received daily oral glucocorticoids treatment or no glucocorticoids treatment at all.

Results revealed that a mutation in the HSD3B1 gene - specifically the HSD3B1(1245A) variant - was associated with poor lung function and glucocorticoid treatment resistance. The HSD3B1 gene encodes the enzyme 3-beta-hydroxysteroid dehydrogenase-1 (3-beta-HSD1), which catalyzes peripheral conversion from adrenal dehydroepiandrosterone (DHEA) to more potent androgens. It is possible that the effect of the HSD3B1(1245A) variant on lung function may be attributed to inhibition of this process.

“Glucocorticoids, which modulate systemic inflammatory response, are commonly prescribed to treat severe asthma. However, until now we have not understood why many patients do not benefit from them,” said senior author Dr. Nima Sharifi, director of the genitourinary malignancies research center at the Cleveland Clinic. “These findings make the case for genetic testing and personalized treatment and provide important information for identifying which patients should be treated using different therapies.”

The study was published in the January 13, 2020, online edition of the journal Proceedings of the [U.S.] National Academy of Sciences.