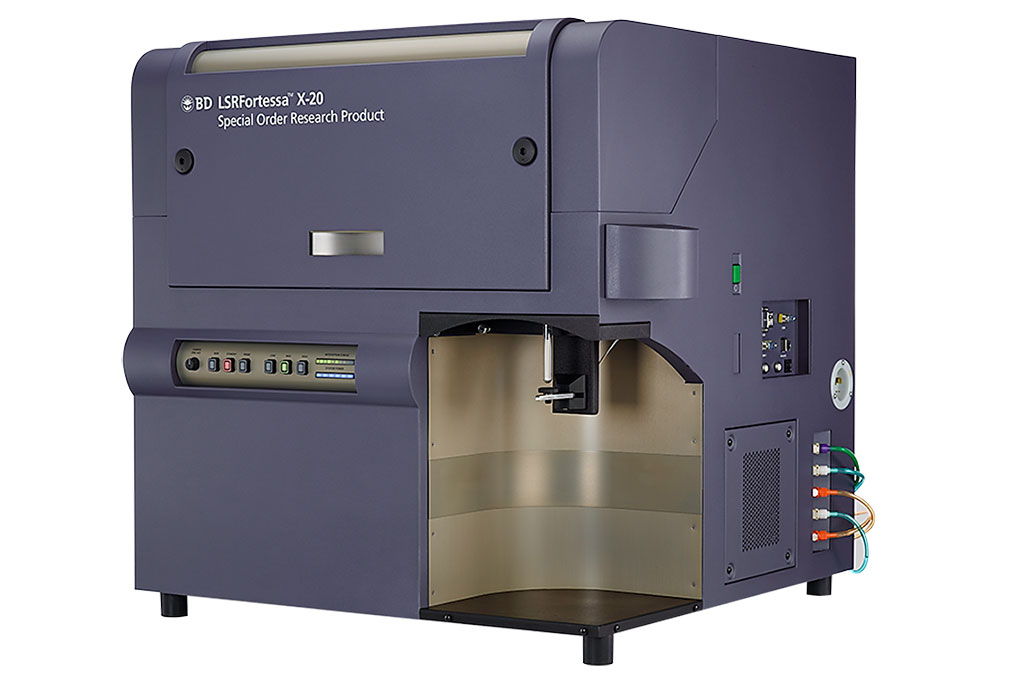 Image: The BD LSRFortessa X-20 Cell Analyzer can be configured with up to five lasers to detect up to 20 parameters simultaneously to support ever increasing demands in multicolor flow cytometry (Photo courtesy of BD Bioscience)
The Human T-cell Leukemia Virus-1 (HTLV-1)-Associated Myelopathy/Tropical Spastic Paraparesis (HAM/TSP) is a progressive neurodegenerative disease characterized by the demyelination of the middle-to-lower thoracic cord.

HTLV-1 targets mainly T-cells, altering their function and ability to induce an antiviral specific immune response, even participating in the disease evolution as mentioned previously. However, in addition to T-cells, HTLV-1 also targets innate immune cells such as classical and plasmacytoid dendritic cells (cDCs and pDCs, respectively), as well as monocytes.

Medical Virologists at the Université Claude Bernard Lyon 1 (Lyon, France) and their colleagues analyzed innate cell responses at steady state and after blood cell stimulation using an agonist of the toll-like receptor (TLR)7/8-signaling pathway in blood samples from a Brazilian cohort (15 HAM/TSP patients, 15 HTLV-1 asymptomatic carriers, and 15 non-infected individuals). The average age was 52 ±6.35 years for men and 49.15 ±10.84 years for women. Age means were 49.8 years for healthy donors (HD), 46.93 years for asymptomatic carriers (AC) and 53.8 years for HAM/TSP.

HTLV-1 serologic diagnosis was made by ELISA (Ortho Diagnostics, Rochester, NY, USA) and positive samples were confirmed by western blot. All patients whose serum sample was reactive with either test was submitted to a nested-PCR using HTLV-1 generic primers and amplified products were digested with restriction enzymes. Blood samples were processed, stimulated and analyzed with a LSR Fortessa X-20 cytometer (BD Biosciences, San Jose, CA, USA). Fluorochrome compensation was performed with BD Biosciences’ compensation beads and FMO (Fluorescence Minus One) conditions.

The investigators observed a lower response of IFNα+ DCs and monocytes in HAM/TSP compared to asymptomatic carriers, as a potential consequence of corticosteroid treatments. In contrast, a higher frequency of monocytes producing MIP-1α and pDC producing IL-12 was detected in HAM/TSP blood samples, together with higher IFNγ responsiveness of NK cells, suggesting an increase sensitivity to inflammatory response in HAM/TSP patients compared to asymptomatic carriers. This sustained inflammatory responsiveness could be linked or be at the origin of the neuroinflammatory status in HAM/TSP patients.

The authors concluded that their findings suggest an impaired antiviral response and increased inflammatory responsiveness by dendritic cells and monocytes in HAM/TSP patients compared to asymptomatic carriers. This sustained inflammatory responsiveness upon innate cell activation could participate in the establishment of the HAM/TSP disease. The study was published on November 12, 2021 in the journal PLOS Neglected Tropical Diseases.