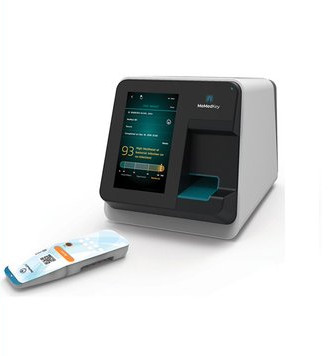 Illustration
A first-of-its kind test that decodes the immune response to accurately distinguish between bacterial or viral infections within minutes has been granted clearance by the US Food and Drug Administration (FDA).

MeMed (Haifa, Israel) has been granted 510(k) clearance by the FDA for the use of its MeMed BV test on its point-of-need platform MeMed Key to help healthcare providers distinguish between bacterial and viral infections. The technology has been cleared for both children and adults. The FDA clearance was based on a multi-center blinded clinical validation study enrolling over 1,000 children and adults and addresses goals laid out in the US National Action Plan for Combating Antibiotic Resistant Bacteria. The test provides highly accurate results with Area Under the Curve of 90% and 97% (primary and secondary endpoints).

Bacterial and viral infections are often clinically indistinguishable, leading to the prescription of antibiotics for the treatment of viral infections, for which they are ineffective. Antibiotic misuse drives the emergence of antimicrobial resistance (AMR), one of the biggest healthcare challenges of our time. The novelty of MeMed’s technology is that it decodes the body’s immune response to infection, the ‘host response’, rather than focusing on detecting the presence of a microbe. This allows robust diagnosis when the infection site is inaccessible or unknown, even when the pathogen is undetectable using conventional tests, or when the cause of infection is emerging new pathogens. It enables better informed antibiotic treatment decisions, an essential tool in the fight against resistant bacteria.

“It has been a decade long journey to reach this point from concept to impacting patient lives,” said Dr. Eran Eden, MeMed’s co-founder and CEO. “This FDA clearance is a breakthrough moment in the field of advanced host-response and could not have been achieved without the dedication of the MeMed team, our clinical partners in the US and around the globe, and the support of the US Department of Defense and EU Commission.”

“For those of us who care for acutely ill children, we have been waiting decades for accurate, rapid diagnostics to confidently guide the care of moderately ill children without a clear focus of infection or recognizable viral illness. This novel test offers promise to help differentiate those children with self-limited viral illness from those with possible bacterial infection, thereby supporting the judicious use of antibiotics,” said Rich Bachur, MD, Professor of Pediatrics and Emergency Medicine, Harvard Medical School, and Chief, Division of Emergency Medicine, Boston Children's Hospital.