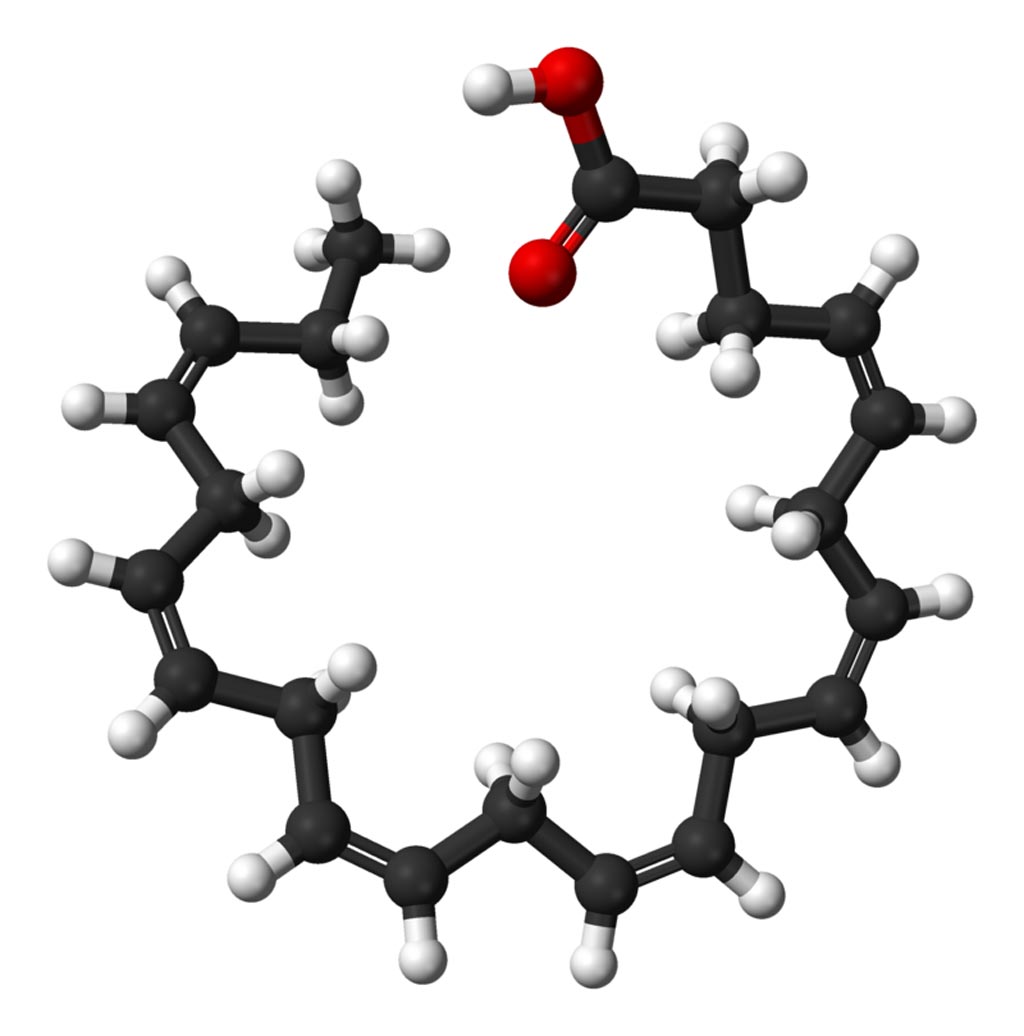 Image: A ball-and-stick model of the docosahexaenoic acid (DHA) molecule. DHA is an omega-3 fatty acid that is a primary structural component of the human brain, cerebral cortex, skin, and retina (Photo courtesy of Wikimedia Commons).
Metabolites produced during digestion of omega-3 fatty acids have been found to have anti-cancer properties, and their synthetic derivatives have the potential to be developed into potent chemotherapeutic drugs.

Dietary omega-3 fatty acids, such as docosahexaenoic acid (DHA), have been shown to suppress tumor growth through their conversion to epoxide metabolites. Alternatively, DHA is converted enzymatically into docosahexaenoylethanolamide (DHEA), an endocannabinoid with anti-proliferative activity.

Investigators at the University of Illinois (Champaign-Urbana, USA) had previously described a novel class of anti-inflammatory DHEA-epoxide derivative called epoxydocospentaenoic-ethanolamide (EDP-EA) that contained both ethanolamide and epoxide moieties. To expand those findings they examined the anti-tumorigenic properties of EDP-EAs in an osteosarcoma (OS) mouse model.

The investigators showed an approximately 80% increase in EDP-EAs in metastatic versus normal lungs of mice. In addition they found significant differences in the apoptotic and anti-migratory potencies of different EDP-EA structural isomers, which were partially mediated through the cannabinoid receptor 1 (CB1). The cannabinoid receptor is represented in relatively high density on the surface of cancer cells.

The investigators then synthesized derivatives of the most pro-apoptotic isomer. These derivatives were found to display reduced hydrolytic susceptibility to fatty acid amide hydrolase (FAAH) and increased CB1-selective binding.

"We have a built-in endocannabinoid system which is anti-inflammatory and pain-reducing. Now we see it is also anti-cancer, stopping the cells from proliferating or migrating," said senior author Dr. Aditi Das, professor of comparative biosciences at the University of Illinois. "These molecules could address multiple problems: cancer, inflammation, and pain."

"The dramatic increase indicated that these molecules were doing something to the cancer - but we did not know if it was harmful or good," said Dr. Das. "We asked, are they trying to stop the cancer, or facilitating it? So we studied the individual properties and saw that they are working against the cancer in several ways. Dietary consumption of omega-3 fatty acids can lead to the formation of these substances in the body and may have some beneficial effects. However, if you have cancer, you want something concentrated and fast acting. That is where the endocannabinoid epoxide derivatives come into play - you could make a concentrated dose of the exact compound that is most effective against the cancer. You could also mix this with other drugs such as chemotherapies."