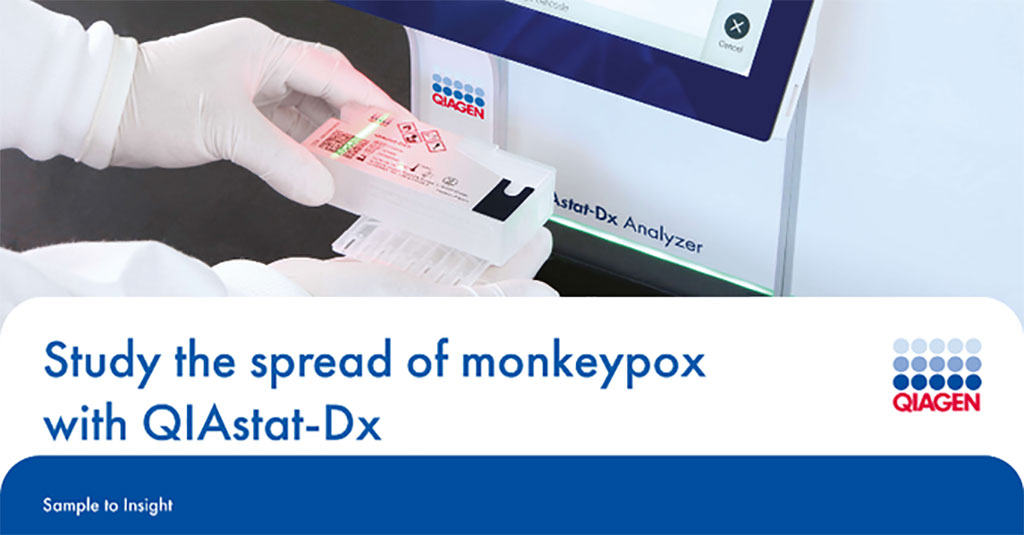 QIAGEN N.V. (Venlo, Netherlands) newly-launched QIAstat-Dx Viral Vesicular Panel RUO tests for the six pathogens that produce similar symptoms. The new panel ­– currently for research use only (RUO) – comes in cartridge form to run on QIAGEN’s QIAstat-Dx automated syndromic testing devices. With some 3,000 QIAstat-Dx PCR devices installed in specialized laboratories around the world, QIAGEN is leveraging the value of syndromic testing proven during the pandemic to help fight the spread of monkeypox, recently declared a public health emergency by the World Health Organization (WHO) and the US government.

The panel’s RUO-status means it currently can only be used for the surveillance – not screening or diagnosing – of monkeypox cases. But QIAGEN is ready to make applications for clinical use should authorities in the US and the EU open new diagnostic pathways in light of this public-health emergency. The concept of syndromic testing has shown its value during the pandemic, when QIAGEN launched the QIAstat-Dx Respiratory SARS-CoV-2 panel to differentiate between up to 23 viral and bacterial targets for common pathogens causing respiratory tract infections. The company also introduced the high-throughput QIAstat-Dx Rise device that processes up 160 tests per day. QIAGEN has extended syndromic testing to other areas, including gastrointestinal conditions and meningitis.

QIAGEN teams around the world are working with healthcare authorities to support testing for the monkeypox virus outbreak. The QIAstat syndromic testing solution adds to the broad portfolio that the company offers to address all testing needs. Alongside QIAGEN sample-technology kits, testing components and instruments that are used for instance by public health agencies for the development of their own tests, the NeuMoDx clinical PCR system allows laboratories to process self-developed tests (LDTs). A commercial single-plex assay running on this instrument is currently in development. The QIAcuity digital PCR also allows for monkeypox detection in wastewater – a surveillance method that proved its worth during the COVID-19 crisis.

“Monkeypox cases are soaring across the globe with many demographic groups infected. Surveillance is an essential tool in the fight against infectious diseases. QIAstat-Dx Viral Vesicular Panel in combination with the QIAstat-Dx platform will allow medical researchers to detect monkeypox with gold-standard PCR testing-technology in about one hour,” said Jean-Pascal Viola, Senior Vice President, Head of the Molecular Diagnostics Business Area at QIAGEN. “Currently the world’s only syndromic test for the pathogen, the panel will prove to be crucial for detecting and then combating the spread of monkeypox around the globe.”