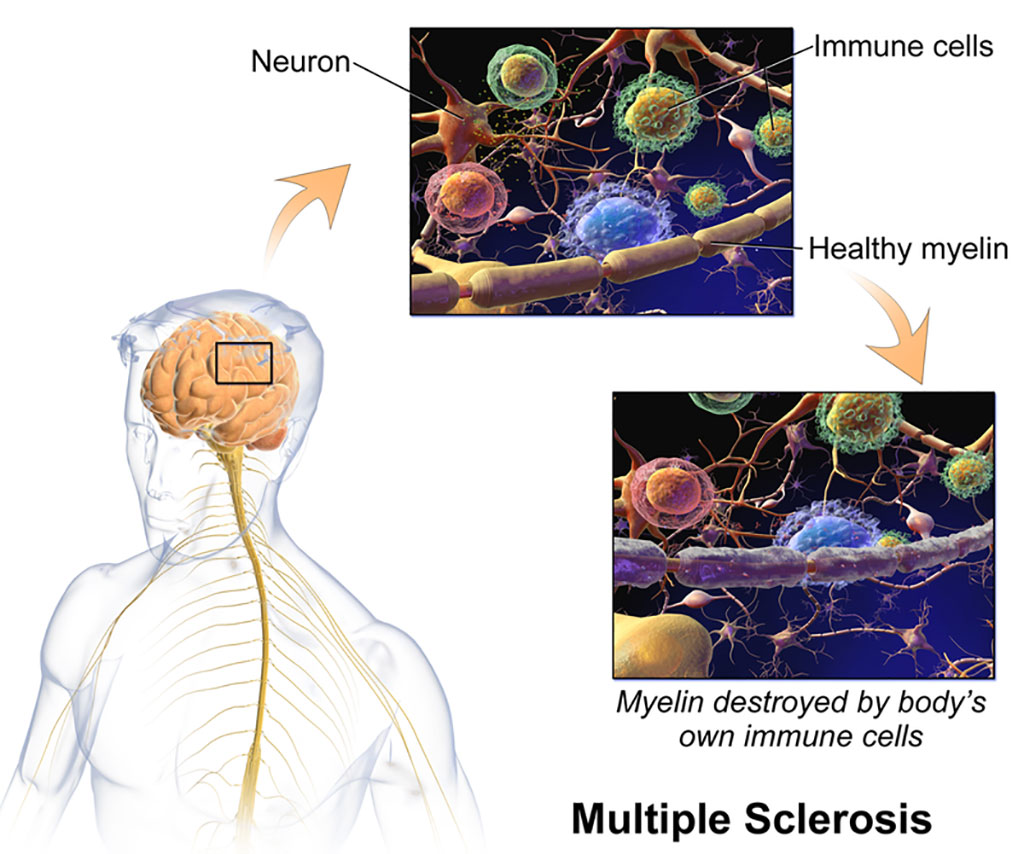 Image: Processes underlying multiple sclerosis (Photo courtesy of Wikimedia Commons)
A test that measures the amount of neurofilament light chain protein in blood plasma can predict the likelihood of patients with multiple sclerosis (MS) progressing to the more severe forms of the disease.

MS is a demyelinating disease in which the insulating covers of nerve cells in the brain and spinal cord are damaged. This damage disrupts the ability of parts of the nervous system to transmit signals, resulting in a range of signs and symptoms, including physical, mental, and sometimes psychiatric problems. MS takes several forms, with new symptoms either occurring in isolated attacks (relapsing forms) or building up over time (progressive forms).

Investigators at the Karolinska Institutet (Stockholm, Sweden) studied the association between plasma neurofilament light chain (pNfL) levels and the risk that an MS patient would progress to the more severe forms of the disease.

The investigators measured concentrations of pNfL in 4,385 patients with MS and 1,026 randomly selected population-based sex- and age-matched controls using the highly sensitive Quanterix (Billerica, MA, USA) Single Molecule Array (Simoa) NF-Light Advantage Kit. The Simoa method can detect considerably lower levels of protein biomarkers than other analytical methods. Participants in the study were monitored for deterioration in their condition during the following year and then for increased levels of disability over a total of five years.

Results revealed that MS patients had an average of 11.4 picograms per milliliter of pNfl in their blood compared to an average of 7.5 picograms per milliliter for the control subjects. MS patients with high levels of pNfl were 40% to 70% more likely to have worsening disability during the next year than those with low levels of the protein. Those with high pNfl levels were also 50% more likely to reach a level of moderate or significant disability. Thus, 525 (16%) patients reached the moderate level of disability, and 352 (9%) reached significant disability.

"In a disease like MS that is so unpredictable and varies so much from one person to the next, having a noninvasive blood test like this could be very valuable, especially since treatments are most effective in the earliest stages of the disease," said first author Dr. Ali Manouchehrinia, assistant professor of clinical neuroscience at the Karolinska Institutet. "These results suggest that elevated levels of these proteins measured early on in the course of the disease may help us to predict how the disease will develop and monitor how treatment is working. More research is needed before a blood test could be used routinely in the clinical setting, but our results are encouraging."

The study was published in the May 20, 2020, online issue of the journal Neurology.