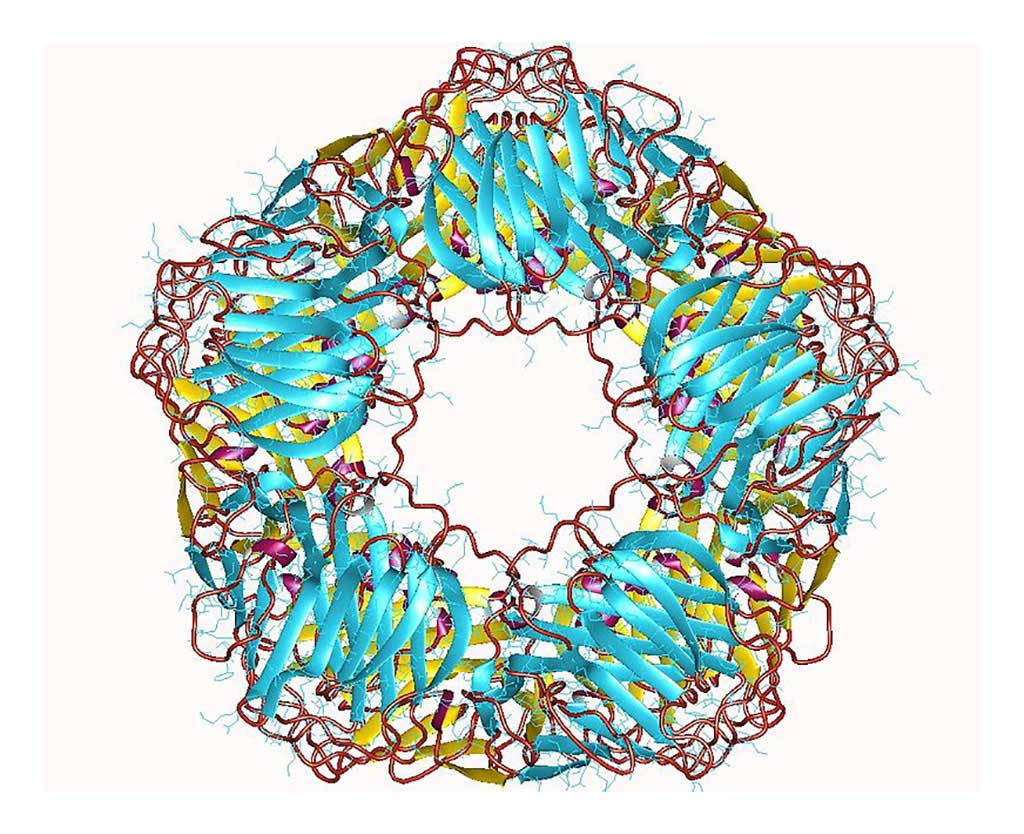 Image: Model of C-reactive protein (CRP) (Photo courtesy of Wikimedia Commons)
By tracking the increase in circulating levels of the inflammatory biomarker C-reactive protein, doctors are able to predict whether newly hospitalized COVID-19 patients will suffer respiratory deterioration with the possible need for intubation.

C-reactive protein (CRP) is a ring-shaped, pentameric protein found in blood plasma, whose circulating concentrations rise in response to inflammation. It is an acute-phase protein manufactured in the liver that increases following interleukin-6 (IL-6) secretion by macrophages and T-cells. Its physiological role is to bind to lysophosphatidylcholine expressed on the surface of dead or dying cells (and some types of bacteria) in order to activate the complement system via C1q.

Investigators at Brigham and Women's Hospital (Boston, MA, USA) examined the theory that inflammatory biomarker levels could predict respiratory decline in patients who initially presented with stable disease. For this study, the investigators followed CRP levels in 100 COVID-19 patients admitted to the hospital.

Results revealed that a rapid rise in CRP levels during the first 48-to-72 hours of hospitalization was predictive of subsequent respiratory deterioration and intubation, while steadier CRP levels were observed in patients whose condition remained stable. Increasing CRP during the first 48 hours of hospitalization was a better predictor (with higher sensitivity) of respiratory decline than initial CRP levels.

"We realized that whereas a single CRP lab value from hospital admission was not very practical as a predictor of who might get sicker, tracking the rate of change from Day One to Day Two or Three was a very powerful and very clinically predictive test," said senior author Dr. Edy Yong Kim, instructor in medicine at Brigham and Women's Hospital. "Even though all of these patients looked clinically similar upon admission, as early as 24 hours after hospitalization, the immune systems of patients who would go on to the ICU multiple days later were already inflamed, as measured by these biomarkers. Because of our findings, we changed our guidelines at the Brigham to mandate CRP tracking every day for the first three days of hospitalization so that we could try to identify vulnerable patients and keep a close eye on their inflammation."

The CRP study was published in the October 28, 2020, online edition of the journal Cell Reports Medicine.