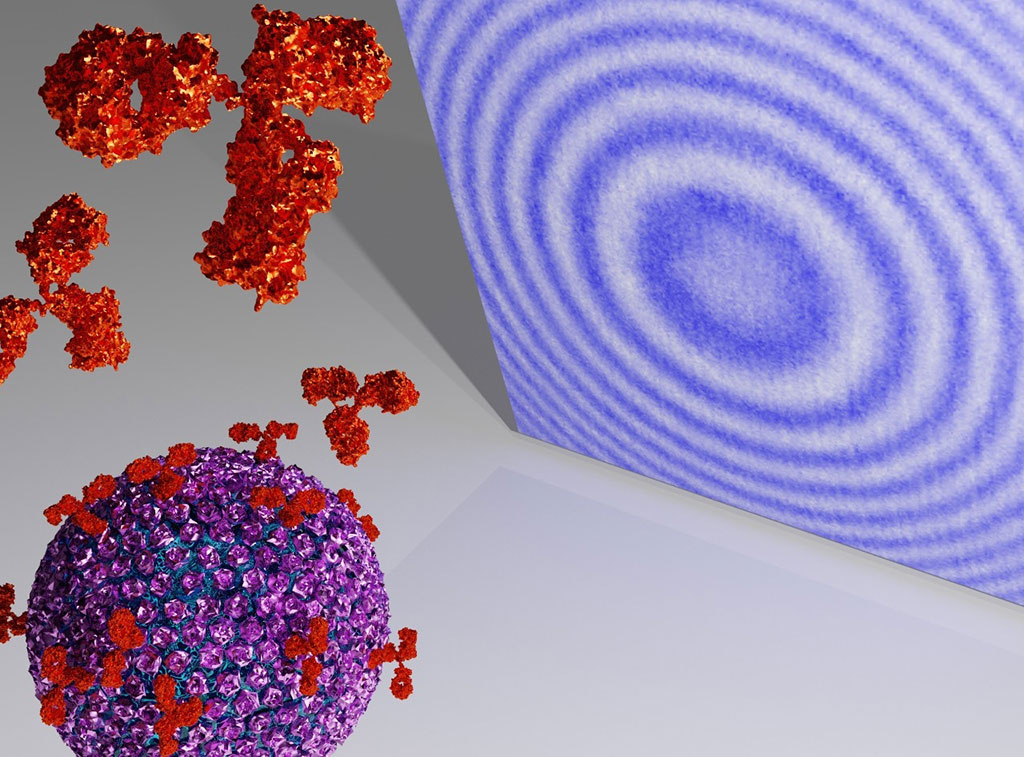 Image: A rendering of holographic microscopy of a test bead binding antibodies (Photo courtesy of NYU`s David Grier)
A new method using holographic imaging to detect both viruses and antibodies has the potential to aid in medical diagnoses and, specifically, those related to the COVID-19 pandemic.

The team of New York University (New York, NY, USA) scientists who have developed the new method base their test on holographic video microscopy, which uses laser beams to record holograms of their test beads. If fully realized, the proposed test could be done in under 30 minutes, is highly accurate, and can be performed by minimally trained personnel. Moreover, the method can test for either the virus (current infection) or antibodies (immunity).

The surfaces of the beads are activated with biochemical binding sites that attract either antibodies or virus particles, depending on the intended test. Binding antibodies or viruses causes the beads to grow by a few billionths of a meter, which the NYU researchers have shown they can detect through changes in the beads’ holograms.

“Our approach is based on physical principles that have not previously been used for diagnostic testing,” said David Grier, a professor of physics at NYU and one of the researchers on the project. “We can detect antibodies and viruses by literally watching them stick to specially prepared test beads.”

“We can analyze a dozen beads per second,” explained Grier, “which means that we can cut the time for a reliable thousand-bead diagnostic test to 20 minutes. And we can measure those changes rapidly, reliably, and inexpensively.”

The holographic video microscopy is performed by an instrument named xSight.
“This instrument can count virus particles dispersed in patients’ saliva and also detect and differentiate antibodies dissolved in their blood,” added Grier. “This flexibility is achieved by changing the composition of the test beads to model what we are testing.

“Each type of bead tests for the presence of a particular target, but can also test for several targets simultaneously. Our holographic analysis distinguishes the different test beads by their size and by their refractive index—an easily controlled optical property.”

The scientists say that this capability can be used to develop libraries of test beads that may be combined into test kits for mixing with patient samples. This will support doctors in distinguishing among possible diagnoses, speeding patients’ treatment, reducing the risk of misdiagnosis, and cutting the cost of healthcare.