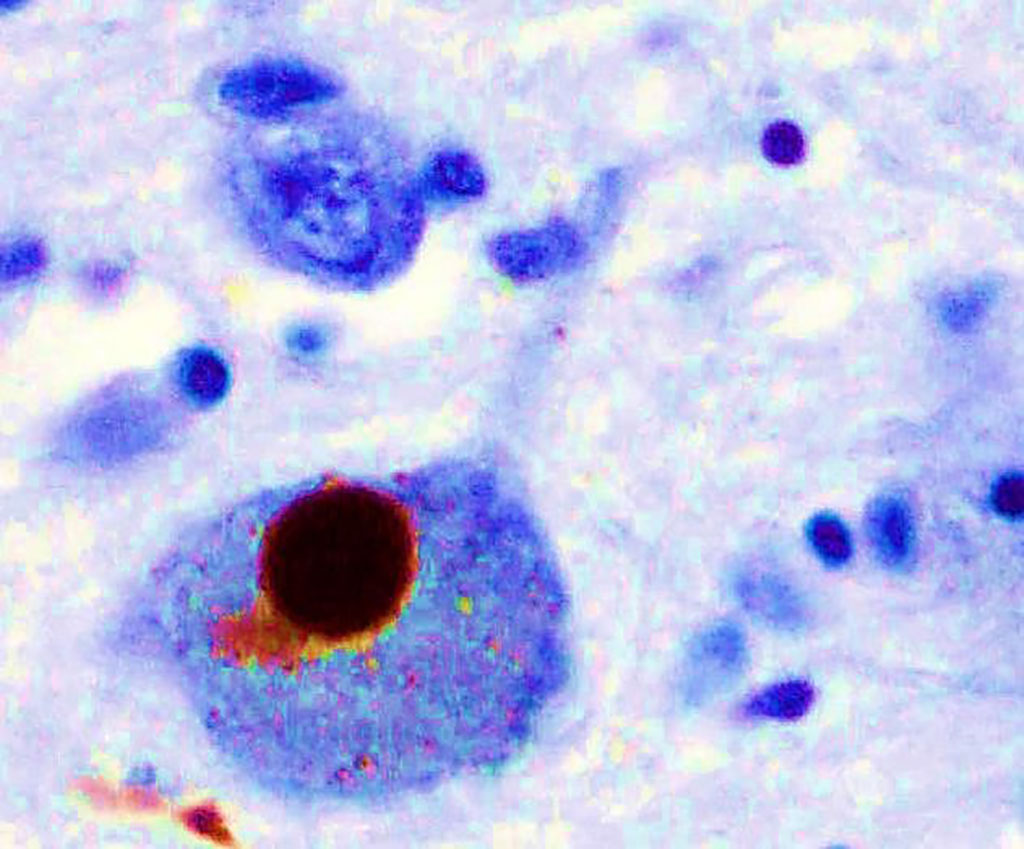 Image: Immunohistochemistry for alpha-synuclein showing positive staining (brown) of an intraneural Lewy-body in the Substantia nigra in Parkinson`s disease (Photo courtesy of Marvin101).
It is challenging to distinguish between Parkinson’s Disease and Multiple System Atrophy (MSA) because the early signs are similar, disturbances in movement, tremors, uncontrollable movements during sleep, impaired speech, but the diseases progress differently and can require distinct treatment plans.

Parkinson’s Disease (PD) leads to shaking, stiffness, and difficulty with balance and movement as well as a host of nonmotor symptoms. MSA leads to similar motor impairment, and also earlier and more severe dysfunction of the autonomic nervous system, which controls involuntary actions such as blood pressure, digestion, and urination. MSA progresses quicker and is often mistaken for PD at first. Both diseases are characterized by deposits of a protein known as alpha-synuclein (aSyn) in the nervous system.

A team of scientists from different institutions and led by those at the University of Texas McGovern Medical School at Houston (Houston, TX, USA) used Protein Misfolding Cyclic Amplification (PMCA) technology that was shown in previous studies to detect misfolded proteins associated with diseases such as Creutzfeldt-Jakob and Alzheimer's disease. The investigators targeted misfolded aSyn aggregates as a way of developing a sensitive biochemical diagnosis for PD. The team put a small amount of the proteins in question from the patient's cerebrospinal fluid together with normal proteins and watched to see if and how they converted the normal proteins.

The scientists used a combination of biochemical, biophysical and biological methods to analyze the product of α-synuclein-PMCA, and found that the characteristics of the α-synuclein aggregates in the cerebrospinal fluid could be used to readily distinguish between Parkinson’s disease and multiple system atrophy. They also found that the properties of aggregates that were amplified from the cerebrospinal fluid were similar to those of aggregates that were amplified from the brain.

These findings suggest that α-synuclein aggregates that are associated with Parkinson’s disease and multiple system atrophy correspond to different conformational strains of α-synuclein, which can be amplified and detected by α-synuclein-PMCA. The aSyn-PMCA can successfully discriminate between PD and MSA with an overall sensitivity of 95.4%, which could allow doctors a look into the future to see which disease they need to address. The study also helps to understand the basis of these diseases at the molecular basis.

Claudio Soto, PhD, a Professor of Neurology and senior author of the study, said “Our latest study shows that the aSyn aggregates of PD and MSA have different properties, so by amplifying the abnormal aggregates we can detect with high efficiency which disease the patient has. This has huge implications both for accurate diagnosis and clinical care of the patient, and the development of new specific treatments for both diseases.” The study was published on February 5, 2020 in the journal Nature.