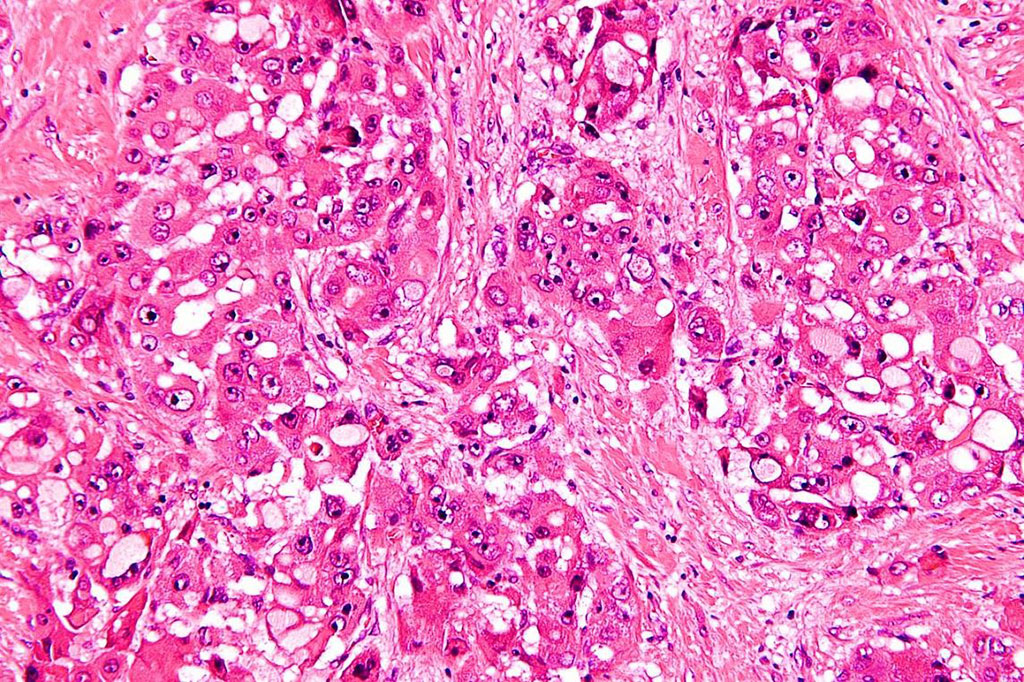 Image: Photomicrograph of histology of fibrolamellar hepatocellular carcinoma, showing large polygonal tumors cells with granular eosinophilic cytoplasm (Photo courtesy of Nephron)
Several types of cancer can form in the liver. The most common type of liver cancer is hepatocellular carcinoma, which begins in the main type of liver cell (hepatocyte). Other types of liver cancer, such as intrahepatic cholangiocarcinoma and hepatoblastoma, are much less common.

Tests and procedures used to diagnose liver cancer include blood tests that may reveal liver function abnormalities; Imaging test, such as an ultrasound, computerized tomography (CT) and magnetic resonance imaging (MRI) or a biopsy by removing a sample of liver tissue for testing.

Scientists from the Mayo Clinic (Rochester, MN, USA) collaborating with the commercial company Exact Sciences (Madison, WI, USA) collected blood samples from 137 radiographically diagnosed hepatocellular carcinoma (HCC) and 313 age-matched controls with benign liver disease without structurally apparent HCC. They assessed 10 methylated markers that had previously been reported as having some association with HCC, as well as several protein markers including alpha-fetoprotein (AFP).

The investigators found that the panel had a specificity of 90%, and they reported that their panel of six markers detected early-stage HCC with a sensitivity of 71% compared to 25% for AFP. The panel also detected Stage A HCC with a sensitivity of 74% compared to 30% for AFP. Overall, the panel's sensitivity was 82.6% compared to 47.1% for AFP. At 90% specificity, AFP's sensitivity was 45%. The team chose to include AFP and an AFP isoform called AFP-L3 as the two protein markers in the panel. AFP-L3 is represented as a ratio of a lectin protein to total AFP: the AFP-L3% assay is used to help identify people at risk of developing HCC, and studies have shown that AFP-L3% test results higher than 10% can be indicative of early HCC. They further found that the addition of methylation markers gave the test more diagnostic power than the addition of DNA mutation markers would have.

John B. Kisiel, MD, an associate professor of gastroenterology and hepatology, and a co-author of the study, said, “We think that the data are a very compelling indication that this new panel of markers is substantially better than AFP. The difficulty with ultrasound is that while it's the current standard of care, it is also often insensitive for early-stage cancers, and although it's relatively widely available, it depends on a human operator to take the pictures, and it depends on patients coming in to have it done.” The study was presented at the Annual meeting for the American Association for the Study of Liver Diseases, held November 13-17, 2019 in Boston, MA, USA).