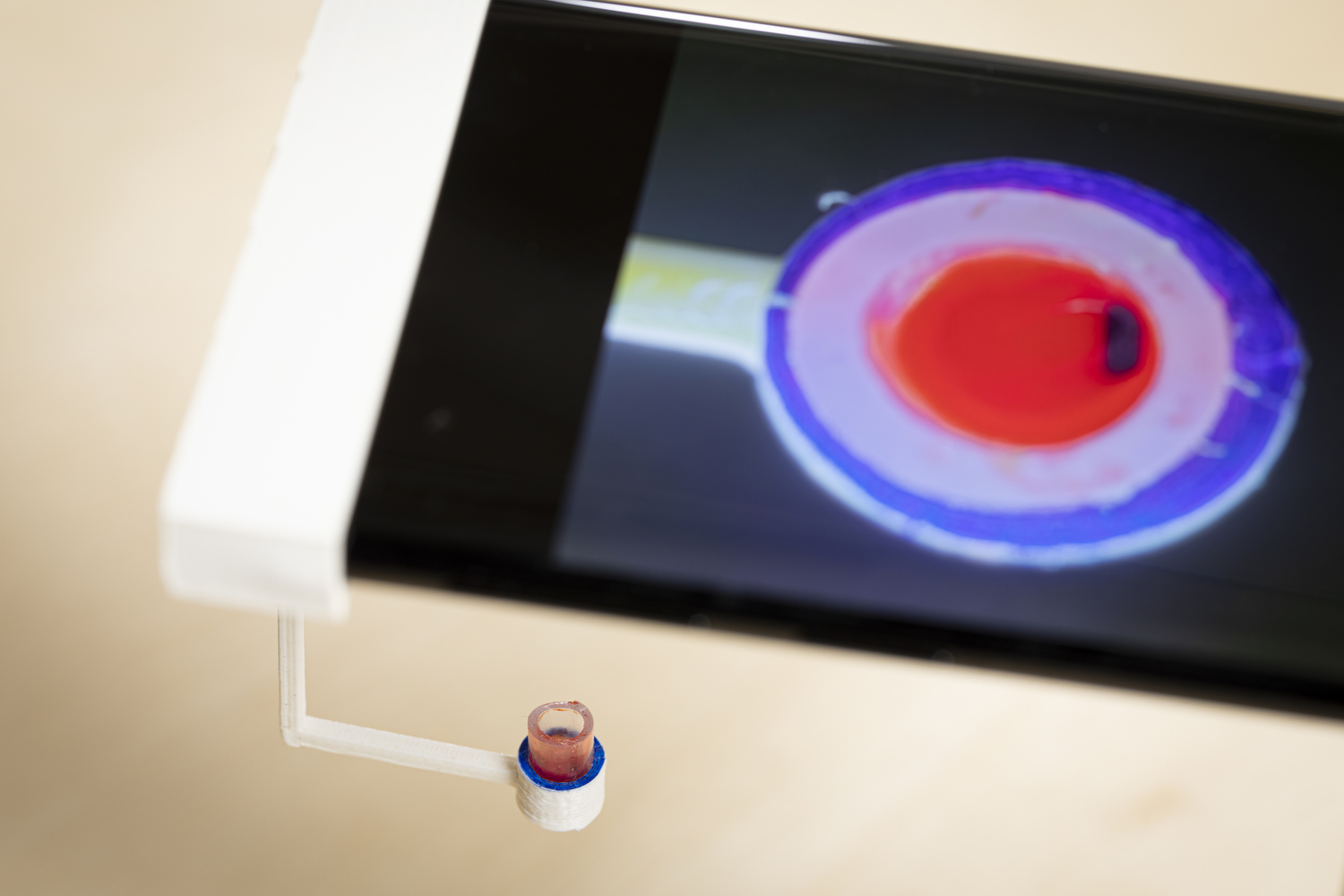 Image: A new blood-clotting test that uses only a single drop of blood and a smartphone with a plastic attachment that holds a tiny cup beneath the phone’s camera (Photo courtesy of Mark Stone/University of Washington)

Researchers have developed a new blood-clotting test that uses only a single drop of blood and a smartphone vibration motor and camera.

The human body responds to injury with bleeding, followed by clot formation and eventually lysis. This carefully maintained homeostasis minimizes the risks of hemorrhage and inappropriate clotting like ischemic stroke, myocardial infarction or pulmonary embolus.

Frequent prothrombin time (PT) and international normalized ratio (INR) testing is critical for millions of people on lifelong anticoagulation with warfarin. Currently, testing is performed in hospital laboratories or with expensive point-of-care devices limiting the ability to test frequently and affordably.

Medical Scientists at the University of Washington (Seattle, WA, USA) have described a proof-of-concept system that uses the vibration motor and camera on existing smartphones to perform PT/INR testing. Smartphones are increasingly becoming ubiquitous in resource-constrained environments and developing countries both in rural and urban settings. Vibration motors and cameras have been an integral part of smartphones for more than a decade. Repurposing these smartphone sensors for PT/INR testing could enable a more affordable blood clot testing tool.

In the new system a drop of blood is added to a small silicone cup, which contains a minute copper particle and a chemical that starts the blood-clotting process. Then the phone's vibration motor shakes the cup while the camera monitors the movement of the particle, which slows down and then stops moving as the clot forms. To calculate PT and INR, the phone collects two time stamps: first when the user inserts the blood and second when the particle stops moving.

The investigators designed a custom Android application on a Samsung Galaxy S9 to perform measurements. The vibration motor on the Samsung Galaxy S9 has a resonant frequency of 159 Hz. The motor was set to vibrate continuously while the camera recorded the clotting process. The camera had an ISO of 320, 1/60 shutter speed, 5500 K white balance and captured frames at the maximum frame rate. The scientists showed that this method falls within the accuracy range of the standard instruments of the field.

The team tested this method on three different types of blood samples. As a proof of concept, the team started with plasma, a component of blood that is transparent and therefore easier to test. They then tested plasma from 140 anonymized patients and also examined plasma from 79 patients with known blood-clotting issues. For both these conditions, the test had results that were similar to commercially available tests. To mimic what a patient at home would experience, the team then tested whole blood from 80 anonymized patients. This test also yielded results that were in the accuracy range of commercial tests.

Shyamnath Gollakota, PhD, an Associate Professor and senior author of the study, said, “Almost every smartphone from the past decade has a vibration motor and a camera. This means that almost everyone who has a phone can use this. All you need is a simple plastic attachment, no additional electronics of any kind. This is the best of all worlds; it's basically the holy grail of PT/INR testing. It makes it frugal and accessible to millions of people, even where resources are very limited.”

The authors concluded that given the ubiquity of smartphones in the global setting, this proof-of-concept technology may provide affordable and effective PT and INR testing in low-resource environments. The study was published on February 11, 2022 in the journal Nature Communications.